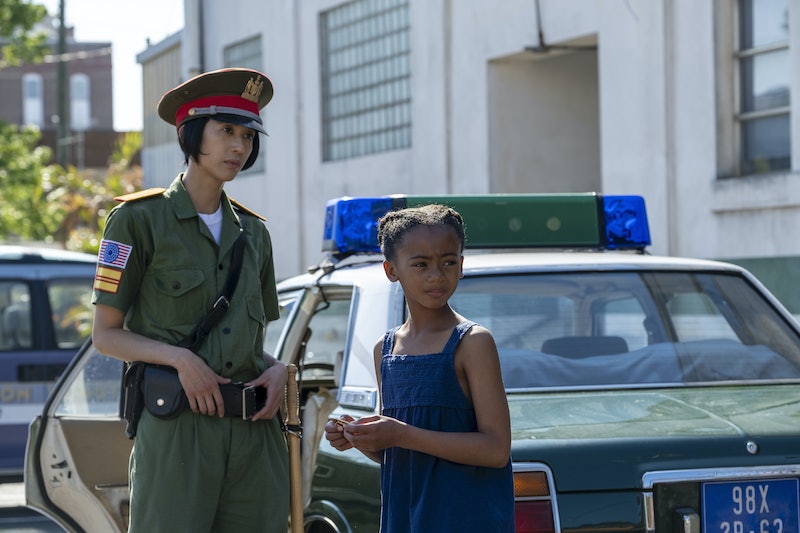 The world of Watchmen is complex, and between the giant engineered squids, mesmerism plans, and Nostalgia trips, it's understandable if you may have forgotten a key difference in the makeup of Watchmen's United States. In Episode 7, we dive into Angela Abar's memories of growing up in Vietnam, which is the 51st state in this universe. The reason for why Vietnam is a state in Watchmen is vitally important to Angela's backstory, and it ties her to both to Dr. Manhattan and even her grandfather Will Reeves.

The episode, entitled "An Almost Religious Awe," opens with a short documentary about Jon Osterman, more popularly known as Dr. Manhattan. In 1959, Jon was a scientist at Gila Flats when he stepped into an intrinsic field generator, not realizing it was still on. The generator tore him apart but somehow didn't kill him, and over the next few weeks he pieced himself back together, molecule by molecule. What resulted was Jon becoming a glowing blue meta-human, capable of bending time and space, making him the closest thing to a god on Earth.

His ability to see the future, duplicate himself, grow to the size of a building, and dissipate human bodies made Dr. Manhattan an obviously overpowered weapon, and so the United States government employed him to help in the Vietnam War. In real life, the United States withdrew its forces in 1975 after a prolonged, messy conflict that many decry to this day. But in the Watchmen universe, President Richard Nixon asked Dr. Manhattan to intervene, and he easily ensured a United States victory by 1971. (This is back before Dr. Manhattan became completely detached from humanity; at the time, an argument like "end the war quickly so our American boys can come home" likely held a lot of sway with the formerly obedient Jon).

Vietnam became the 51st state shortly after, resulting in Vietnamese and English being spoken, and Saigon becoming a major off-mainland tourist attraction, like Hawaii is today. Dr. Manhattan's otherworldly abilities ended the war, but unsurprisingly, not everyone views him as a kindly savior. As the opening documentary says, "Was he the liberating hero who singlehandedly ended the war ... or was he the cold blue conquerer who decimated a way of life?" (To put the real war in perspective, in Vietnam the Vietnam War is called "the resistance to America," and the day the American troops withdrew is the "Liberation of Saigon.")

This question about Dr. Manhattan becomes pertinent to Angela's backstory. In 1987 she's a child living in Saigon and enjoying a "VVN Day" celebration — a day commemorating America's victory — with her parents. It's during the festivities that Angela notices a man handing off a bag to another on a bicycle. Before she can even realize what that means, the man dives into an American military jeep, yells "death to the invaders," and sets off a bomb. The blast kills both of Angela's parents.

As a result, Angela grows up in an orphanage until she's presumably old enough to leave and join the police academy there. (The opportunity to leave with her grandma ends before they can even get in the taxi.) Dr. Manhattan's presence essentially shapes who Angela is; like her grandfather before her, she develops a sense of range and injustice as just a child, and she tries to regain some measure of control by becoming a cop. Perhaps Angela would've still become a cop if her parents hadn't tragically died as a result of the lingering tensions between the United States government and the Vietnamese, but perhaps she wouldn't have.

Suffice to say, Dr. Manhattan technically put Angela on the path to be who she is today, and so it's understandable if she has some choice words for him if he ever decides to come down from Mars.