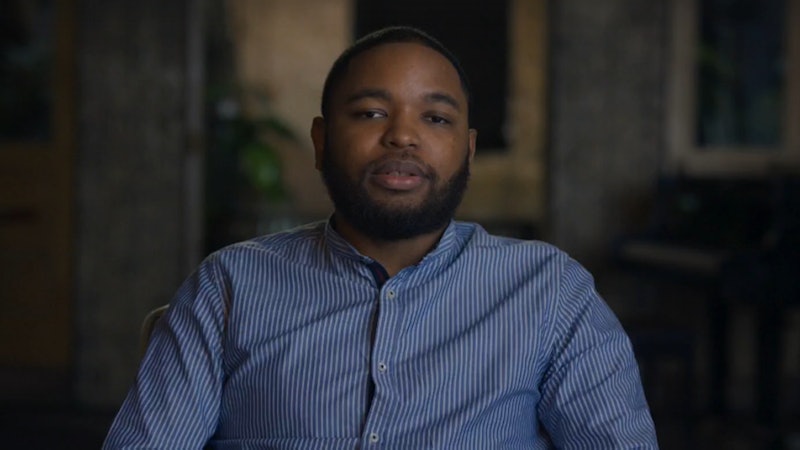 If there's one television genre that has gone from relative obscurity to the top of everyone's mind in recent years, it's true crime. Just look at the unbelievable popularity of Netflix's outrageous true crime series Tiger King. But not all of these documentaries have to be about a grisly crime to be compelling. Case in point: HBO's new true crime documentary, The Scheme. The film is about the "biggest criminal case in collegiate sports history," according to HBO, and it resulted in a prison sentence for a young sports agent named Christian Dawkins. But determining exactly why Dawkins was sentenced to jail time is where the bulk of the intrigue comes in.

The true crime at the center of The Scheme has to do with bribery in college basketball, but it's a lot more complicated than your standard betting scandal. College basketball is a billion dollar industry, one which has long been accused of exploiting its players — who, it's worth noting, are not getting paid for playing.

"All of this operates under the guise of amateurism. Student athletes get room and board. They get college tuition for free in exchange for playing these sports, right? That may have worked in the early 1940s 1950s, when you didn’t have literally billions of dollars being made," The Scheme's director, Pat Kondelis, tells Bustle. "No taxes are being paid, these are all nonprofits, and then you have these coaches ... everybody is allowed to make money, lots of money, under the rules of amateurism, except for the actual athletes."

That controversial business model is at the heart of the 2017 bribery scandal featured in The Scheme. Dawkins was allegedly involved in multiple bribery schemes which led to him receiving two separate prison sentences. In one case, he is alleged to have paid college coaches to pressure their athletes to sign with his own sports management company. In the other case, Dawkins is alleged to have paid players in order to sway them to attend schools that were sponsored by Adidas.

For his role in the Adidas scandal, Dawkins was convicted of wire fraud and conspiracy to commit wire fraud in Oct. 2018. In March 2019, he was sentenced to six months in prison for his alleged crimes. For the coaches-bribing scandal, Dawkins was convicted on charges of bribery and conspiracy to commit bribery in May 2019. In Oct. 2019, he was sentenced to one year and one day of prison time, according to ESPN. Dawkins' attorneys have appealed both convictions.

Though this may appear to be an open-and-shut case at first glance, The Scheme shows that it's anything but. By allowing Dawkins to share his side of the story, the documentary exposes some possibly shady behavior on the part of the FBI's investigation which may point toward entrapment. The doc also questions the prosecution's behavior in seemingly setting up Dawkins as the fall guy while apparently letting some big-name coaches who were allegedly involved in the schemes off the hook.

"The coaches were not allowed, they were blocked, from coming into the courtroom when called to testify by Christian’s defense attorney," Kondelis says. "The wiretap calls were all not admitted because the prosecution fought that tooth-and-nail, and the majority of the evidence against these big name coaches is under seal and it’s not allowed to come out."

Dawkins was sentenced for bribery and wire fraud in connection with illegally paying college basketball coaches and players. But he is far from the only person in the billion dollar college basketball industry to be involved with such a scandal, so if you're wondering why the FBI chose to fixate so much on him specifically, check out The Scheme on HBO.

With additional reporting by Danielle Burgos