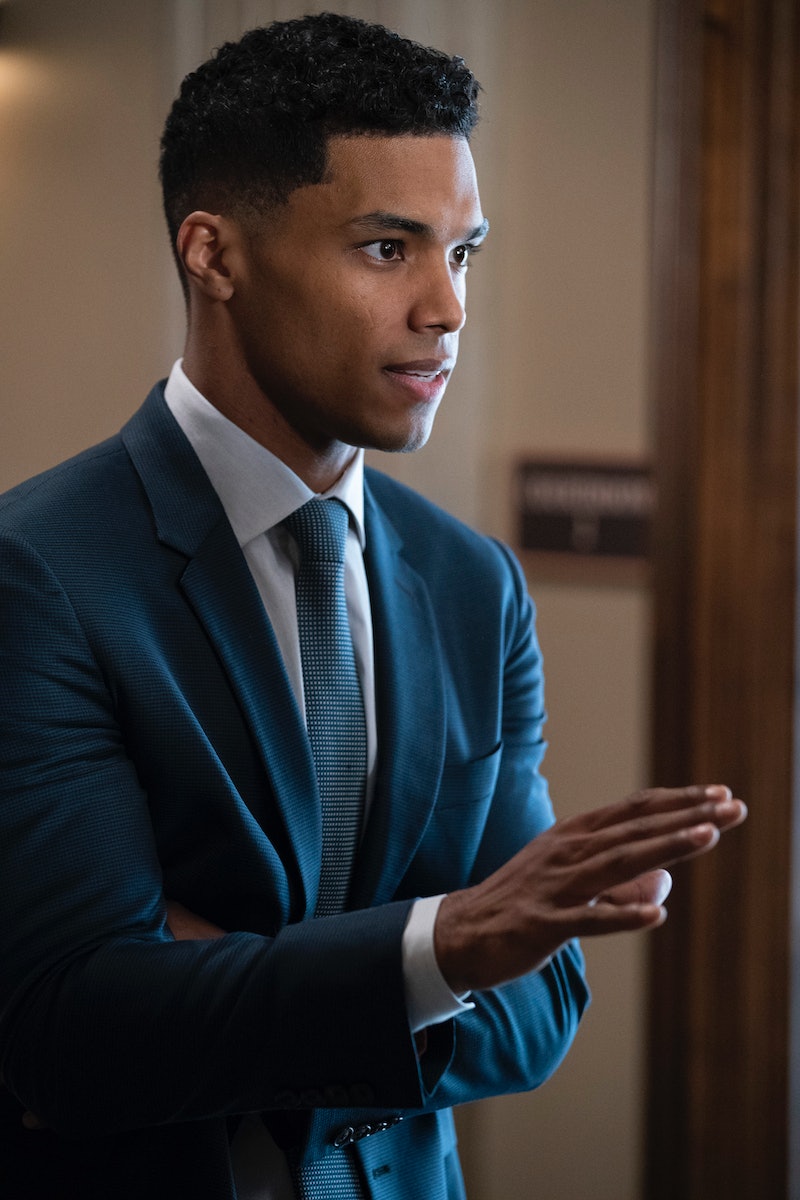 Even though How To Get Away With Murder has revealed the truth about Gabriel's parents — it turns out, he's Annalise's late husband's son — there's still a lot we don't know about the character. Gabriel was arrested on HTGAWM this week. And right now, fans are just as confused as the Keating Four are about why exactly that happened.

In the end of the episode, Annalise gets a call informing her that someone in custody has listed her as their lawyer. It turns out, that someone is Gabriel. And just in case there's any doubt about what's going on, the previews for next week's episode make it very clear that Gabriel is under arrest.

Before the arrest, Gabriel was talking to the authorities, trying to explain that voicemail and how, exactly, he knew the late D.A. Miller. He tells one agent that he was working for Miller to help with an investigation into Annalise, but he didn't give many details about why, exactly, she was supposedly being investigated.

Plus, there are definitely some signs he wasn't telling the whole truth here. After all, would it really stop the investigation for them to know he was Sam's son? If anything, that would make his determination to join Annalise's inner circle less suspicious. Gabriel seemed a little guarded when trying to explain the voicemail, so it's possible there's more to the situation than he let on.

Since Miller isn't there to explain what really happened, it's a toss-up as to whether Gabriel was really relaying information about Annalise to the D.A. But even if he wasn't, he and Miller did know each other somehow, and it sounds like Miller knew he was Sam's son, too.

Of course, if Gabriel had been trying to help Miller take down Annalise, it probably wasn't a wise move for him to call on her to be his lawyer. Annalise and her students, not to mention Frank and Bonnie, can track pretty much anything down. So if he's trying to cross her, she'll be one step ahead. In fact, in the promo for next week's episode, Annalise asks Gabriel how she can trust he isn't working with the FBI.

Another possibility is that Annalise could find a way to place some of the blame for Miller's death on Gabriel. Annalise is determined to blame the governor for Nate's father's death, as well as Miller's. And who knows — Gabriel could even have been working with the governor, too.

At this point, there's still no evidence that the late D.A. had been involved with any misconduct. (The call to the prison warden turned out to be a friendly message of thanks, and there's no proof that Miller was behind the falsified DNA results, as Nate believes.) But if Miller was innocent, why does Gabriel seem like he's hiding something?

Then again, involvement in an investigation into Annalise, or teaming up with the governor, is a lot of responsibility to put on a second-year law student. It's more than possible that Gabriel is just experiencing some really bad luck after getting involved with Annalise and the Middleton crowd. He wouldn't be the first seemingly innocent person wrapped up in all of their drama — R.I.P., D.A. Miller — and he definitely won't be the last.