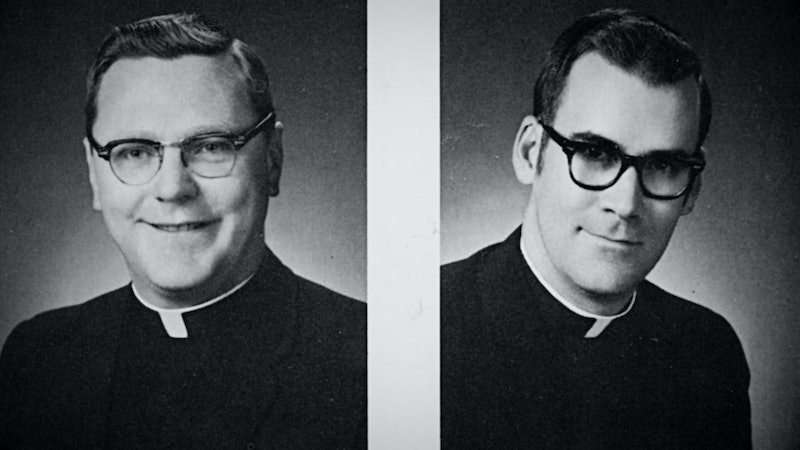 Despite being a man of the cloth, Baltimore priest Father Joseph Maskell's alleged abuses are anything but Godly. Over the course of his years serving as a Catholic priest, it is alleged that Maskell abused and assaulted upwards of 30 young female students. So how did a man who allegedly abused so many others enjoy his life a free man without so much as a trial? Netflix's The Keepers explores the reasons why Father Maskell was never charged with a crime.

In many cases allegations of sexual assault past the statute of limitations little can be done; the statutes of limitations in Maryland, where Maskell worked, are "within seven years from the victim’s 18th birthday [in childhood cases], and three years from the event for adult cases," end up not being enough for legal criminal charges. These statutes of limitations got in the way of a civil case against Maskell in the early '90s, in which victims sought to bring him to justice themselves, but it was enough to start a new investigation into the matter.

Maskell is just one of many cases throughout history of the word of one powerful man managing to survive numerous allegations from women, but that doesn't mean that police weren't actively trying to find a reason to bring Maskell in. When an anonymous detective who goes by the moniker Deep Throat began investigating Maskell and his connection to the death of Cathy Ann Cesnik, he claims he received a troubling call from one of his superiors telling him to stay off the case. As Deep Throat claims to The Huffington Post, the superior allegedly told him "This is a career buster. We knew who the hell killed her back when it happened, and you’ll find out, and you’re gonna find out things you shouldn’t find out. Let it go."

In response to the resurgence of questions surrounding the Cesnik case thanks to The Keepers, the Baltimore Police Department released the following statement:

We have not been afforded the opportunity to preview the series and therefore cannot comment on it. We have been aware for some time of vague allegations of wrongdoing by police in connection with the murder of Sister Cathy Cesnik. In the nearly 50 years since this murder occurred, no one has come forward to BCoPD to initiate an investigation of wrongdoing by police officers, including a woman who came forward through her attorney last week to allege abuse by a now-deceased BCoPD officer. Our detectives contacted her to begin an investigation, and she refused to be interviewed. This has been one of our most active cold cases for many years; our current team of detectives continues to work diligently to solve this case.

Despite numerous pieces of testimony, including a harrowing allegation from one victim who claimed Maskell showed her Cesnik's body as a threat, there was allegedly not enough physical evidence to bring any charges against Maskell.

The Archdiocese of Baltimore also released the following statement to Bustle regarding Father Maskell and the claims surrounding the Catholic priest, as shown in The Keepers:

"Since the 1990s, when the Archdiocese of Baltimore first learned of an allegation of child sexual abuse against Maskell, and on numerous occasions since, the Archdiocese has publicly acknowledged and apologized for the horrific abuse committed by him. The Archdiocese reported the allegations to civil authorities in the 1990s and cooperated fully in any investigation, removed Father Maskell’s faculties to function as a priest, apologized to victims and offered them counseling assistance, sought additional victims, and provided direct financial assistance to 16 individuals abused by Maskell. Though it was unaware of the abuse at the time it occurred approximately 50 years ago, the Archdiocese deeply regrets the damage that was caused to those who were so badly harmed and has worked diligently since becoming aware of their abuse to bring some measure of healing to them. The Archdiocese is wholly committed to protecting children, holding abusers accountable—clergy and laity alike, and promoting healing for victims. These are hallmarks of the Archdiocese’s child protection efforts, which we strive to constantly strengthen. There is no room in the Archdiocese for anyone who would harm a child and every effort must be made to ensure what happened before never happens again. It is our hope that “The Keepers” advances this pursuit, just as we hope the series helps those who have kept alive the memory of Sr. Cathy and our collective hope that justice will be won for her."

Maskell died in 2001, never facing a criminal charge related to the allegations against him. Maskell denied the allegations until his death, and told the Baltimore Sun in 1994 that "I never had sex with a kid ... It is absolutely untrue."

More like this
Sarah Everard’s Killer Wayne Couzens Is Appealing His Whole-Life Sentence
By Sophie McEvoy
Don Crowder Successfully Defended Candy Montgomery, But His Story Ended In Tragedy
By Gretchen Smail
UK Viewers Will Have To Wait To See Jessica Biel’s Killer Housewife Series
By Rachel Mantock
All The Theories About Kathleen Peterson’s Death
By Morgan Leigh Davies
Get Even More From Bustle — Sign Up For The Newsletter