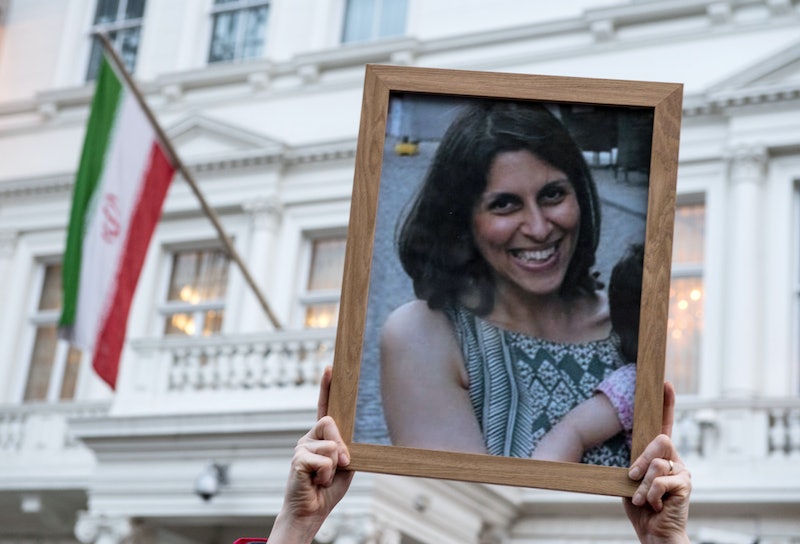 Sexism dictates that women should stay quiet and remain firmly in the background. In parts of the world, a woman who shares a political viewpoint may be tsk-tsked and admonished with a glare. But, in some countries, women who fight for political change can be locked up, mistreated, and silenced.

“In countries like Iran or Saudi Arabia, women who dare to take part in protests of almost any kind are at serious risk of arrest, beatings, and lengthy prison sentences," says Ellie Kennedy, Amnesty International UK's individuals at risk campaigner. Just one example, she says, is women in Iran who "have recently been jailed simply for protesting against the country’s discriminatory veiling laws which force women to wear head coverings in public."

Iran is the location of a staggering number of detainments. And while men are targeted, too, the treatment of women has set a frightening precedent. In 2016, at least 40 women were imprisoned on "political, ideological, and security charges" in the country, according to a report by Iranian organisation NCRI Women's Committee. Due to government secrecy, the committee suspected the real figure was higher.

"Under the mullahs' rule in Iran, women are supposed to stay home and, therefore, having any kind of political or civil rights activity is considered a serious crime for women and evokes greater retaliation by the government," reads the report. According to the committee, many political prisoners are held in Tehran's Evin prison and are deprived of medical treatment and family contact as well as allegedly being subjected to torture.

Nazanin Zaghari-Ratcliffe has been in Evin prison since 2016. Sentenced to five years for allegedly spying against the Iranian government, per the Guardian, the British-Iranian citizen has always proclaimed her innocence.

The 41-year-old was detained at an Iranian airport before travelling back to London with her daughter, reports the BBC. Her employers publicly declared that she was on holiday and was not in the country to work. Her husband, who lives in the UK, regularly reports on her condition, saying she was intensely interrogated for two months, kept in solitary confinement, and went on hunger strike after being refused specialist medical care, per the Independent.

Zaghari-Ratcliffe lost her final appeal in Iran's supreme court in April 2017, reports the BBC, and is unable to access British assistance due to Iran's refusal to recognise dual nationals. Former Foreign Secretary and now Prime Minister Boris Johnson did not help matters when, in November 2017, he suggested Zaghari-Ratcliffe was training journalists. Johnson went on to apologise, per the Guardian, and said he had called Iran to admit his mistake.

March 2019 saw Zaghari-Ratcliffe granted diplomatic protection, elevating her imprisonment to a formal issue between Britain and Iran. As the Telegraph reports, the country still refused to acknowledge her dual nationality.

A Foreign Office spokesperson told Bustle: "We are continuing to provide consular assistance, meet regularly with [Zaghari-Ratcliffe's] family, and repeatedly raise the case at the highest diplomatic levels." It "remains extremely concerned about [her] welfare" and stressed that the UK "has been clear that Iran must start respecting human rights and stop detaining dual nationals."

At September's UN General Assembly, the prime minister raised the issue with Iran's President Hassan Rouhani. (The subsequent jolly-looking photos sparked instant criticism.) The Iranian embassy did not respond to a request for comment.

Cases like this tend to cause a commotion when news of arrests, charges, or sentences make headlines. But the outrage can soon be hidden in the chaos of the global landscape and the affected women are effectively left to rot.

If it weren't for campaigners and nonprofit organisations, some stories would never reach the light of day, or they would languish in a footnote on the bottom of an otherwise celebratory article. Take Saudi Arabia's female driving ban, for example. Although lifted in June 2018 amidst several women's rights reforms, some of the activists responsible for pushing for such change are still behind bars.

“In Saudi Arabia, a group of women are currently on trial for ‘promoting women’s rights’ and ‘calling for the end of the male guardianship system,'" explains Kennedy. These include the "right-to-drive" campaigner Loujain al-Hathloul and women's rights activists Samar Badawi, Nassima al-Sada, and Nouf Abdulaziz.

In August, Amnesty detailed how at least 14 supporters of the Saudi women's rights movement, including male relatives, had been arrested since April 2019 and were still being detained without charge. According to the organisation, these activists are said to have "endured torture, sexual abuse, and other forms of ill treatment during the first three months of their detention."

Lina al-Hathloul, whose sister appeared in court alongside other activists earlier this year, per Reuters, told the Independent in September the trial had been suspended "without any information about it." She said her parents spoke to Loujain every week on the phone and visit her monthly, but that she and her brother were banned from contacting her.

"We are never really sure about the conditions she is in because they do not let her speak freely," Lina said of her sister. "She is imprisoned arbitrarily. Nothing she does is free — even her conversations with her family. However, she is managing to stay strong."

Saudi officials have denied allegations of torture, per the Independent, and were investigating maltreatment allegations. The Saudi embassy did not respond to Bustle's request for comment.

Above are some of the most prominent female detainments to have occurred in recent years. But there are sadly plenty more buried in the daily news cycle. Since Oct. 17, Iranian beauty queen Bahareh Zare Bahari has been held at an airport in the Philippines, per the Telegraph, after Iran issued an Interpol Red Notice for an alleged assault. As the Guardian reports, the accusation was made by an Iranian national with the alleged assault said to have taken place in the Philippines.

Bahari told the publication the charge is false and was made because of her political activism and support for critics of Iran's Tehran regime. (At a 2018 pageant, she held up a poster of exiled former Crown Prince Reza Pahlavi.) She believes she will be killed or imprisoned if she returns to Iran. Markk Perete, undersecretary to the Philippines' justice department, told the Telegraph the country was unaware of the allegation. The same department told the Guardian Bahari's asylum application would be processed in "due time."

If Bahari is taken to Iran, she could join British-Australian Dr. Kylie Moore-Gilbert who was recently sentenced to 10 years in an Iranian prison on suspected spying charges. (No charges have been made public, reports the Guardian.) Since being held in Evin prison, Moore-Gilbert — who was a lecturer in Islamic studies at the University of Melbourne — has reportedly faced solitary confinement and has had no contact with relatives or friends.

Aras Amiri, a British Council employee, received the same decade-long sentence for "acting against national security" after visiting her ill grandmother, per the BBC. In August, she lost an appeal. Her husband believes she may be being used as "a bargaining chip" in Iran-UK relationships. The Foreign Office told the BBC it was "concerned" at the appeal rejection, adding: "Sentencing a woman to 10 years in prison for seeking to build cultural ties and aid understanding between the peoples of the UK and Iran is unjustifiable."

Other Iranian cases include French-Iranian Fariba Adelkhah, a Paris-based anthropologist and author of several books on Iran, who was arrested in June, according to the Guardian. France's foreign ministry demanded her release in October, per Reuters, but Iranian foreign ministry spokesperson Abbas Mousavi called their comments "unacceptable," reiterating that Iran does not recognise dual nationality, reports Al Arabiya.

In September, human rights activists Atena Daemi and Golrokh Iraee Ebrahimi — both Iranian nationals — were told they must serve an additional 2.1 years in prison for "propaganda against the state" and "insulting the supreme leader." Their "crimes," reports the Centre for Human Rights in Iran, involve criticising prison conditions, denouncing executions of political prisoners, and singing a "revolutionary" anthem.

According to Daemi's mother, the pair have also been banned from participating in political and civil rights activities for two years, which is a ban many view as a violation of their human rights. Ebrahimi was only released from an original prison sentence in April, reports the human rights centre.

Political views appear to be the main reason for women being held on spurious charges and subsequently imprisoned. Almost 70 women were said to be facing violence in Nicaraguan prisons in February, per the International Institute on Race, Equality and Human Rights, after a string of anti-government protest arrests. In June, eight were released, confirming mistreatment. Per the BBC, Nicaragua's government previously denied such allegations.

Bahrain, too, has been accused of mistreating female activists and human rights defenders with unlawful arrests, violent threats, and physical assault. A September report, co-authored by the Bahrain Institute for Rights & Democracy, accused local human rights institutions of failing to properly investigate allegations and criticised global governments for their human rights failings.

Two cases — both seemingly politically motivated — have occurred in the past few weeks alone. In late September, Moroccan journalist Hajar Raissouni was jailed for a year before later receiving a royal pardon, reports the BBC. Her charge wasn't espionage-related, like so many are, but for having premarital sex and an illegal abortion. Raissouni believed the charges were in response to her political writing, per Grazia.

And, on Oct. 17, journalist and prominent #MeToo activist Sophia Huang Xueqin was reportedly arrested in China for "picking quarrels and provoking trouble," a charge punishable by up to five years in prison, per South China Morning Post.

But not all arrests or imprisonments fixate on so-called political actions. Simply being a woman can be problematic. As Kennedy says: “It isn’t even that women in countries like Saudi Arabia and Iran risk persecution for being overtly ‘political’ — even women who attempt to exercise a relatively modest level of autonomy over their dress and other day-to-day habits can be deemed a ‘threat'."

A recent Amnesty report details this stark reality. Women in Jordan, the organisation state, are being imprisoned for disobeying male relatives and for having sex outside of marriage. Some are behind bars with no charge or imminent trial, simply put there at the whim of a man's word.

These facts are brushed aside every single day because it has become so normalised that women's lives are part of a misogynistic political game. You may feel helpless to change anything, but know that you aren't. Raising awareness, supporting campaigns like Amnesty's, and pushing your political representatives to examine their government's relationship with countries exhibiting a flagrant disregard for human rights can all go some way to keeping the light on for the aforementioned women, and all the women whose names remain unknown.

Politics and people will forever be intertwined. But locking people up for simply living? For having a voice? That should never be acceptable.