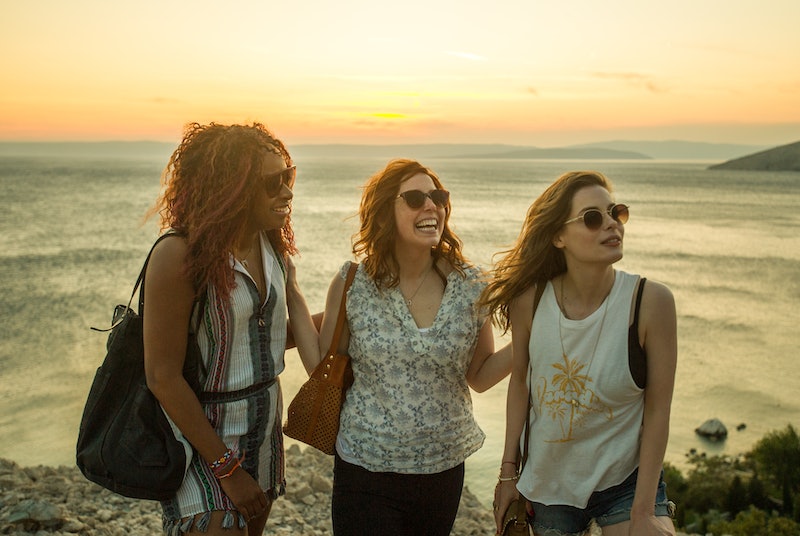 In Netflix's hilarious new comedy Ibiza, there's only one thing slightly more irksome than how the characters all pronounce "Ibiza" (ib-ee-za). It's that the promising new film features three American leads without a single bleary-eyed English girl crying in the toilets while her pal tenderly strokes her hair. And that is precisely why we need a British female friendship comedy like Ibiza.

The film, which drops on Netflix on May 25, centres around Gillian Jacobs' world-weary Harper, who is sent to an important meeting in Barcelona and brings along her two best friends, played by Vanessa Bayer and Phoebe Robinson. They convince her to ditch her meeting and hop over to Ibiza in pursuit of a handsome DJ, played by Scottish actor and Game of Thrones alum Richard Madden.

The film has drawn numerous comparisons to Bridesmaids on account of its candid and occasionally chaotic portrayal of female friendship. It comes after a raft of similarly minded films like Bachelorette and Girls Trip, the latter of which smashed the box office, proving that there's a voracious appetite for a feminist, hedonistic comedy centring on a group of fiercely loyal female friends.

So where's our British equivalent? We've had a few male buddy comedies — think The InBetweeners or the James Corden-helmed A League Of Their Own — but we've yet to see a British comedy offering a realistic, nuanced, and funny take on female friendship, which surely needs to change.

After all, there's something decidedly idiosyncratic about female friendship in the UK, with our own particular set of quirks and rites of passage: flat shares, Wetherspoons brunch dates, and exchanging theories on the latest BBC crime drama. There is also something unapologetically and beautifully messy about female friendship in the UK — we don't shy away from the unpleasant stuff.

There have been a few films celebrating British female friendship that we can look to. Ginger & Rosa, starring Elle Fanning, explored the tensions and highs of teenage friendship in 1960s London, while Me Without You sees a young Anna Friel and post-Dawson's Creek Michelle Williams trace a heady female friendship from adolescence through adulthood. There's Morvern Callar, too, which offered a much darker take on the theme, but these have mostly been small-budget art-house films, and roundly lacking in the laughs department. We still need a riotous and funny celebration of British female friendship in all its glory.

One thing we can be grateful for is the recalibration in how female friendship is depicted over recent years: friendship is no longer characterised as a side-plot but as the MVP, demonstrating that women don't see each other as threats and rivals, but as soulmates and allies. However, this feels at its most powerful and transgressive when depicted via a comedy.

Christopher Hitchens infamously argued that women can't be funny in an essay for Vanity Fair, stating that humour is too "aggressive," and that women are too "tender." Tina Fey, Kristen Wiig, and Maya Rudolph famously clapped back, asking "Who Says Women Can't Be Funny?" in a Vanity Fair feature of their own, but the feeling that women don't partake in the same grubby bonding rituals as men can sometimes persist. It's time we got a British take on the genre, to prove that we absolutely do.

Thankfully, there are signs that the tide may be turning. Animals, a novel by Mancunian writer Emma Jane Unsworth, offers a more characteristically British take on female friendship: the book centres on two women sharing a dilapidated flat in Manchester and their chaotic nights out, which are interrupted when one of them meets a man and gets engaged. Animals is currently in production for the big-screen, with Arrested Development's Alia Shawkat and My Cousin Rachel's Holliday Grainger playing the leads. Caitlin Moran is quoted on the jacket cover as calling the book "Withnail with girls," and so perhaps soon we'll get the raucous UK female friendship comedy we deserve.

Another novel ripe for adaptation is Sally Rooney's Conversations With Friends, which offers an achingly contemporary take on a friendship in Dublin, and has lead to Rooney being dubbed "Salinger for the Snapchat generation." The novel features two best friends at university as they ping back hundreds of emails and texts, discussing everything from global capitalism to their Facebook profile photos.

While there are no plans for a Conversations With Friends film adaptation just yet, here's hoping that will change. Female friendship is a gloriously nuanced and particular thing: it's about time we had a British film that spoke truth to that.

More like this
At 28, Melanie C Was Falling In Love & Reclaiming Her Confidence
By Olivia-Anne Cleary
Self Esteem's “F*cking Wizardry” Is An Anthem About Knowing Your Worth
By El Hunt
The 'Heartstopper' Cast Were Spotted Filming In A Major City
By Nola Ojomu and Sam Ramsden
'Mayflies' Is The New Scottish Drama Starring Martin Compston
By Frances Stewart and Sophie McEvoy
Get The Very Best Of Bustle/UK