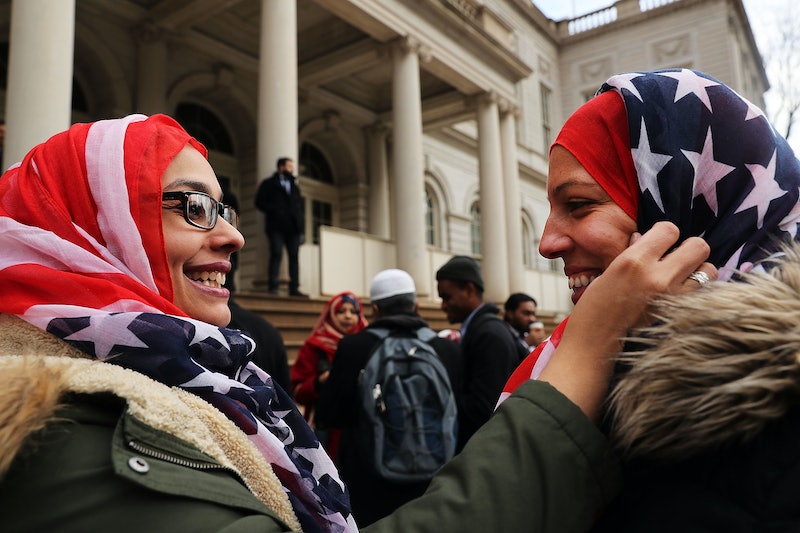 Being an American Muslim journalist is, well, interesting. Being an American Muslim woman journalist is even more so. My identity allows me to view the world through several lenses. There is the American vantage that is heavily tinted with red, white, and blue — and of which I remain critical. There is the gendered perspective which makes me aware of my status in society as a woman. There is the frustrating race component of my identity as a minority in America. And finally, there's being Muslim, which constantly reminds me of how media coverage of Muslim women desperately lacks nuance.

My work as a journalist means that I have to remain atop of developments concerning the topics that I normally report on. These include minority rights in the United States, health care chaos in Congress, technology, gender issues like the wage gap, and religion. But when it comes to the coverage of Islam, I am always a little wary of how it's portrayed. Remember when CNN anchor John Vause asked anti-Islamophobia activist Yasser Louati why hadn't the Muslim community condemned the Paris terror attacks? This claim was patently false. It would have taken Vause just a few minutes to search for condemnations from Muslims against the Paris attacks, which included the #NotInMyName campaign. (Bustle has reached out to Vause for comment.)

But if the coverage of Islam in general is unsatisfactory, its approach toward Muslim women is even worse.

From peddling stereotypes that show Muslim women as constantly oppressed to viewing the most ordinary things Muslim women do as exceptional (like riding bikes in Pakistan), the mainstream media narrative on Muslim women is riddled with hyperbole, stigma, and misinformation.

I have learned that there are three recurring issues that plague the way outlets report on Muslim women. For one, there is an obsession with how Muslim women look. By limiting the coverage of Islam to what I call the big Bs — beards, burkas, and bombs — mainstream media incapacitates an audience's imagination about a people. This fixation is nothing new. Fatemeh Fakhraie, Editor-in-Chief of Muslimah Media Watch, noted the same thing seven years ago on CNN. Fakhraie wrote, "High visibility [of Muslim women] does not directly translate into having your voice heard."

The second problem with the way outlets cover Muslim women has to do with how they are constantly portrayed as victims of their culture. One example of such dangerous stereotyping came from Milo Yiannopoulos, former senior editor at Breitbart News, who claimed that Muslim women are oppressed in their religion in an article titled "10 Things Milo Hates About Islam." He described them as "a herd of women swathed in black bedsheets" who are unable to speak for themselves. Yiannopoulos conveniently didn't mention the thousands of Muslim women who work in politics, education, entertainment, technology, medicine, media, and more.

In America's current political climate, it is even more critical to analyze the media's coverage of women like myself — and it's even more important to improve it. Donald Trump ran a presidential campaign that promised his followers a virtual ban on Muslims, which naturally includes Muslim women. He is the same man who mocked the grieving silence of Ghazala Khan, the Pakistani mother of a Muslim soldier killed in Iraq. He suggested to George Stephanopoulos of ABC News that Khan did not speak at the Democratic National Convention because her religion barred her from doing so. Never mind the fact that Khan did not speak because, as she told MSNBC's Lawrence O'Donnell, the loss of her son is "very hard" so much so that she "cannot even come in the room where his pictures are."

As a journalist and Muslim woman, I am simultaneously reporting and being reported on. Yet when I turn the TV on or flip through the newspaper, the depth of my experiences or of those around me is rarely reflected in the sound bites I hear and the headlines I read.

Last year, I asked a group of students in New York what they thought of when they heard "Muslim woman." I encouraged them to be as honest as possible. The group responded that they thought of the "hijab," "violence," "oppression," and the "Middle East," when they heard the term. I asked them why such imagery came to their minds. The group responded that it was because that's normally what they heard in the news. "That's all that I am shown," one person said.

It's convenient to brush these concerns off as secondary and unimportant. But the effect of the mainstream media coverage of Muslim women spills into actual lives. It informs how one views a certain community and person. It influences a society's attitude and interaction with a different faith. Ultimately, media messages shape lives for better or for worse.

Given the magnitude of impact in this case, it is more than vital to improve the media narrative on Muslim women by applying nuance, diversity, and clarity of thought instead of sticking to outdated and, frankly, embarrassing Islamophobic tropes.