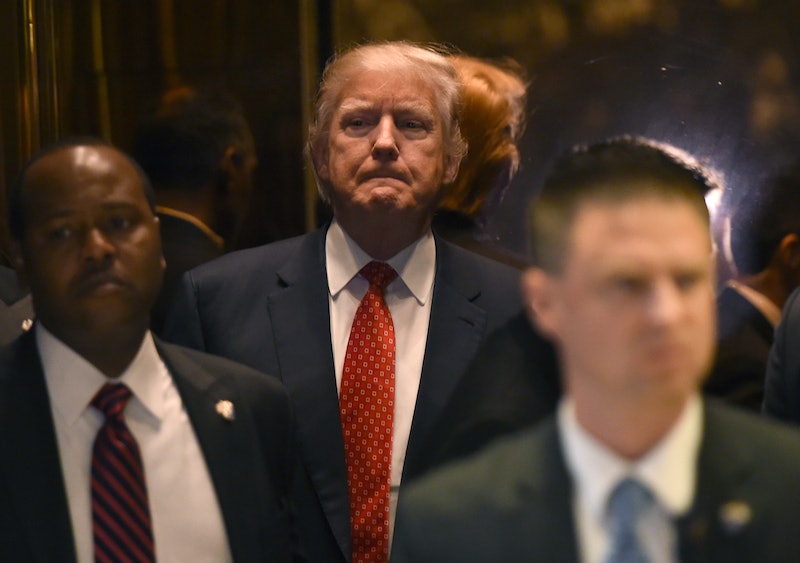 So, the new allegations about president-elect Donald Trump and Russia are pretty nuts. Obviously, it's important to note that they've been denied by the Kremlin, questioned by Kellyanne Conway, and called "fake news" by Trump on Twitter. But still, you kind of have to wonder what their impact would have been if we'd paid attention before the election in November. After all, allegations of sexual acts including urination and prostitutes can't play well in Wichita or Oklahoma City. But let's be honest: Even if these reports came out sooner, the Trump-Russia allegations probably wouldn't have made the slightest bit of difference.

In case you missed it, CNN reported Tuesday that President Obama and the president-elect were briefed by top intelligence officials on Friday about a report that alleges individuals from Trump's presidential campaign conspired with Russians. Perhaps more damning, if you can believe that, is the compromising personal information it says that Russia has. BuzzFeed went on to publish the full report, so now we know some of the alleged details. The example referenced earlier, alleges that Trump employed "a number of prostitutes to perform a 'golden showers' (urination) show in front of him," which has been denied by Trump, Russia, Conway, and others. The report also reads that the Russian intelligence service has this on tape.

Well, even if that is true — and Trump says it isn't — we all know how it would have played out. As Nicholas Barrett of The Economist tweeted, we've seen something awfully similar already (at least in offense) this election season. If the most controversial part of these latest allegations is something sexual, it seems that a good part of the country is willing to overlook it. That's what happened with the Access Hollywood video in which Trump brags about sexually assaulting women. He suffered in the polls for a little bit, but was still elected president of the United States.

The media paid more attention to Hillary Clinton's emails than any controversy that touched Trump — including this one. David Corn for Mother Jones first reported about some of the allegations a week before the election in a piece entitled, "A Veteran Spy Has Given the FBI Information Alleging a Russian Operation to Cultivate Donald Trump." In it he specifically mentions this report:

A former senior intelligence officer for a Western country who specialized in Russian counterintelligence tells Mother Jonesthat in recent months he provided the bureau with memos, based on his recent interactions with Russian sources, contending the Russian government has for years tried to co-opt and assist Trump—and that the FBI requested more information from him.

But what did the mainstream news media talk about instead? Clinton's email "scandal." Now that Trump is elected and will be sworn in on Jan. 20, there's no going back. Trump will be president. Even Hillary Clinton will be there in Washington with her husband, Bill, given his role as a former president. The "peaceful transition of power" being so important and all.

It would be nice to think that if these revelations came out two and half months ago, things would be different now. But given how the Trump scandals played out, it probably would have been just about the same. Shocking just doesn't seem to stick when it comes to Trump.