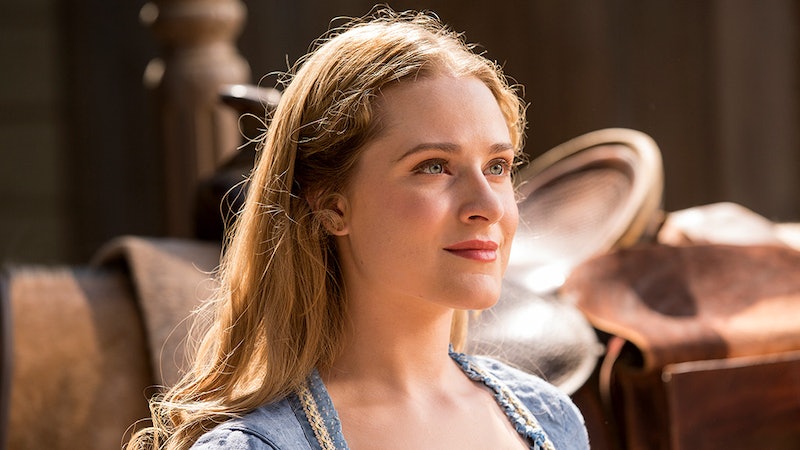 She started as a damsel in distress and ended up as one of the most badass heroines of 2017 television. Westworld's Dolores, played by Evan Rachel Wood, has gone through the ringer in Season 1 of HBO's sci-fi-western hybrid. At Comic-Con 2017, Wood, along with more than a dozen of her costars, answered questions about their experiences on the show. When Wood was asked about playing Dolores, she almost immediately teared up — and here's why. "I get really emotional. The show changed my life in so many different ways. I read the pilot script and I knew she wouldn't stay this damsel in distress, but my little brain didn't fully grasp how deep it was going to go."

The depths of Dolores (and the entire show) haven't been fully realized by anyone (save perhaps showrunners Jonathan Nolan and Lisa Joy), and are still unraveling before fans eyes. "As scripts were coming in, I realized I was at the forefront of this responsiblity... I almost had a panic attack around the fourth episode," she says, still clearly emotional. "I realized what was on my shoulders."

But after the gravity of her role set in, she became energized by the task. "I threw myself in it. I just loved the different layers of her. I loved working with the directors, Jonah [Nolan] and Lisa [Joy], on figuring out what this character was. We are building a tone togehter... inventing a style that was very unique."

Aside from being a character with many layers, Wood found a great deal of strength in this role as a woman. "It's so fulfilling. Especially as women a lot of times you feel like you're wings have been clipped and you aren't represented," she says. "[Westworld] was like someone had given me condor wings and I got to take off and fly," she says, emotions rising.

According to the actor, wearing a futuristic white blazer and slicked back hair, playing Dolores even helped her work through some of her own, real-life trauma.

"Im tearing up... its just so important and its so important right now. To put my experiences in what she was going through, work through my own repressed memories or trama... it was transformative," she reveals. "I would drive home covered in bruises and blood and be happy, because it was for something amazing that meant something."

Fans of the show will have to wait until 2018 to see Dolores back in action, but from a very small amount of footage shown at Comic-Con promoting Season 2, she will be back in full, gun-slinging, butt-kicking force when she makes her eventual and long-awaited return.