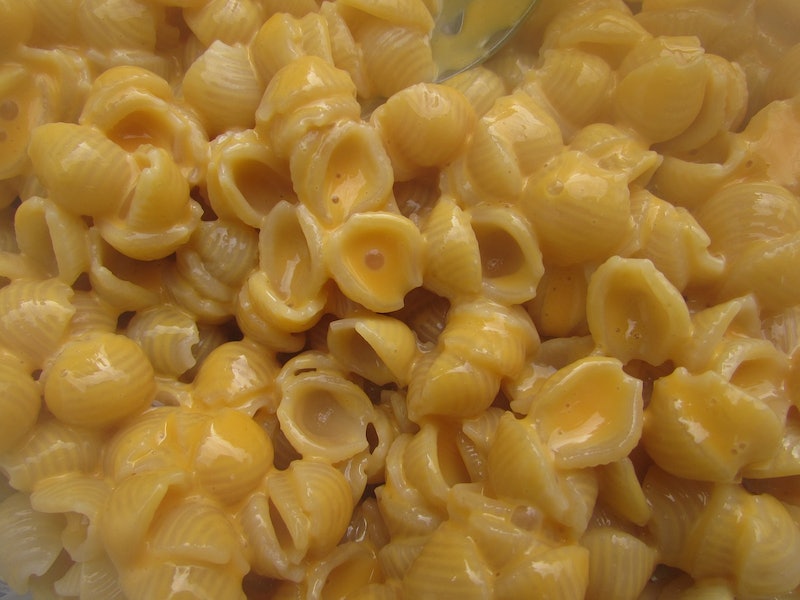 If powdered mac and cheese is your go-to comfort food, a new study detailed in The New York Times reports that your powdered mac and cheese might contain a chemical that could adversely affect your health. The study by the Coalition for Safer Food Processing and Packaging found that phthalates, chemicals widely used in plastics, rubber, coatings, adhesives, sealants, printing inks, and fragrances, might indirectly be making its way into your powdered cheese.

According to the study, which reportedly has not been published in a peer-reviewed journal and was paid for by environmental advocacy groups, average phthalate levels were more than four times higher in macaroni and cheese powders than in other hard or natural cheeses. The study concluded that "further research is needed on the phthalate levels in food and further action should be taken to eliminate phthalates in any food products." Though many brands offer powdered mac and cheese products, Kraft — maker of the country's most recognizable powdered mac and cheese — released a statement to USA Today about the story through company spokesperson Lynne Galia: "We do not add phthalates to our products... the trace amounts that were reported in this limited study are more than 1,000 times lower than levels that scientific authorities have identified as acceptable." Bustle has also reached out to Kraft for comment.

The testing mainly focused on cheese products because a recent scientific review concluded that dairy products were the greatest source of dietary exposure to the phthalates for infants and women of reproductive age, the Coalition for Safer Food Processing and Packaging reported.

The study noted that phthalates are not intentionally added to food, but can accidentally migrate to food during packaging, processing, and preparation. The organization Safer Chemicals, Healthy Families claimed that phthalate exposure can cause infertility, but other research has stated that more research is needed to fully understand what effect it has on humans. Several studies, including one published on Science Direct stated that an answer to questions of how phthalates effect the endocrine system is "not yet in sight and remains to be answered with further studies."

Additionally, a fact sheet from the Centers For Disease Control and Prevention stated that some types of phthalates have affected the reproductive system of laboratory animals, but that more research is needed to assess the human health effects of exposure to phthalates. One recent study from the University of Adelaide in Australia did link phthalates to cardiovascular disease, type-2 diabetes and high blood pressure in men, though it stated that further research is required, Science Daily reported July 12.

You might already know that you shouldn't put plastic in the microwave because it can release phthalates into you foods. The same goes for putting coffee in a plastic mug, or a hot liquid in a child's sippy cup. Dr. Sheela Sathyanarayana, associate professor of pediatrics at the University of Washington in Seattle, who studies phthalates, told The New York Times that if you want to avoid the chemical, "use glass, stainless steel, ceramic or wood to hold and store food instead of plastics."

Asking you to give up your beloved mac and cheese is out of the question, of course. Damn Delicious has a great stovetop mac and cheese recipe that you can make at home in less than a half and hour. A recipe for old-fashioned mac and cheese from Food Fanatic is also super simple, and uses both cottage cheese and sharp cheddar to achieve a down-home feel. And, Simply Scratch has a recipe for individual baked mac and cheese pots so you can still make yourself a single serving. If you want to get fancy, Kitchen Confidante's recipe for truffled mac and cheese with broccoli and goat cheese is right up your alley.

Phthalates are found in lots of other things like personal care products, cleansers, moisturizers, cosmetics, shampoo, and detergents. To lower your exposure you want to choose unscented options, and even consider making your own cleaning products.

Additionally, there are a lot of all-natural personal care options too, like this skincare line from Odette & Joni, which is pure enough to eat. So, if you get stranded without any food during the zombie apocalypse you can eat your skincare products and be just fine.