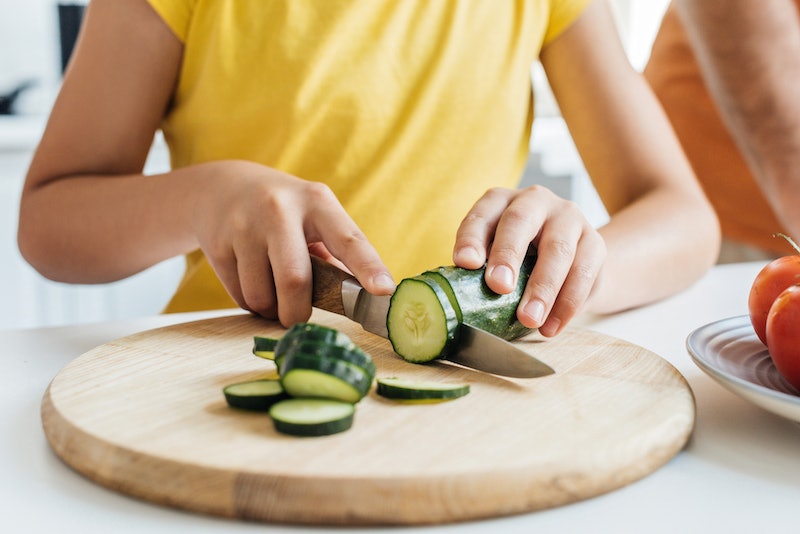 Whether you're heading out to a restaurant or going home to have dinner with your parents, the fact that you're vegan probably comes up more than you want it to. "But what can you eat?" and "How do you get your protein?" and "Come on, don't you miss [insert food here]?" are just some of the questions I know I've been subjected to over the five years I've been been vegetarian with a side of not eating dairy. And even when people are trying to help, they often just get it wrong — like saying, "This place is vegan-friendly!" when the place has exactly one exactly one sad roasted vegetable side. Of course, you don't want to make a fuss, so you might go out of your way apologizing to make sure the host doesn't feel badly. If you feel like you constantly have to apologize for being vegan, you're definitely not alone.

Often, friends and family might imply that your veganism is a burden to them, even when you insist they don't have to go out of their way to make anything "special" for you. Socializing while vegan can be tough when your friend wants to have their birthday dinner at a barbecue place, or if the only meatless, non-dairy side your sibling made for their dinner party is a salad without any significant source of protein. But why should you not eating meat or dairy be less important than your friends' seeming desire to eat an entire animal with every meal?

A lot of the time, when friends or family push back about your dietary choices, it's rooted in insecurity or fear of judgment — but that doesn't mean you have to work to counter that.

"I feel as if people have many assumptions about what veganism is and [that] is partly due to their own defensiveness," says lauren Ornelas, founder of the Food Empowerment Project, which is a woman of color-founded and led organization dedicated to helping people recognize the environmental and human impact of their food choices. These assumptions can make a lot of people feel the need to be quiet about their veganism in certain company.

Criticisms of veganism can put you in a position where you feel like you have to defend rather than be proud of your food choices, whether they're for ethical or health-based reasons. Myths about this dietary practice — like the idea that it's a western construction, or that vegan means "cruelty-free" for human workers — often fuel these challenges that might make you want to apologize for the way you eat.

One of the myths that people assume to be true is based on mainstream portrayals of veganism as a "white people thing." Sure enough, with famous vegan cookbooks like Thug Kitchen (written by white authors and full of phrases that are written as if in AAVE), the mainstream vegan market is full of racist and white supremacist rhetoric that markets plant-based eating as a form of "racial purity." And while this brand of veganism has given the food choice a bad name, it's still a myth to assume that this kind of marketing accounts for a legacy of eating practices that are rich with the vibrant history and activism of vegans of color. Still, while religious practices as widespread as Buddhism, Hinduism, Jainism, and Rastafarianism have long rejected eating animals, cookbooks by white vegan authors continue to dominate social media and Google searches.

But choosing veganism as a health, ethical, or even political choice is nothing to apologize for in the context of such important activism. Because even in the midst of this erasure, Ornelas tells Bustle that young vegans of color have a lot to to be proud of for the way they move in the world. "Do your best not to be seen as invisible or be tokenized and do walk away when you must," she says.

Because you never have to apologize for being a "burden" on others for making valid dietary choices, or for expressing your dietary needs. As Ornelas says, you do not have to make yourself invisible or smaller to accommodate other people's opinions about your food choices. Instead, you might want to pursue a sense of community.

Getting involved in local community gardens that do not harm animals or human workers, making ethical purchasing choices, and if you want to and can, getting involved in vegan activist organizations are some ways (beyond simply eating this way yourself) that you can exercise your pride in your food choices. And bringing your full self to the table is vitally important. "Sometimes the vegan movement wants you to leave the pieces of who you are behind," Ornelas says to young vegans of color, "but you do not have to."

And if there's one thing to be especially proud about regarding being vegan, Ornelas tells Bustle, it's the ethic at the bottom of it all. "Veganism is very simply not wanting to cause harm," she says, to non-human animals and to humans alike. So when you're moving through the world without eating animal products, remember that you never have to apologize for your choices, as long as you're actively creating space for all vegans to be heard.

More like this
The UK Abortion Laws In 2022, Explained
By Sophie McEvoy
5 Ways To Stand In Solidarity With Women In America From The UK
By Sophie McEvoy
How To Fight For Reproductive Rights, Based On How Much Time You Have
By Courtney Young
Plan C Vs. Plan B: What's The Difference?
By Lexi Inks
Get Even More From Bustle — Sign Up For The Newsletter