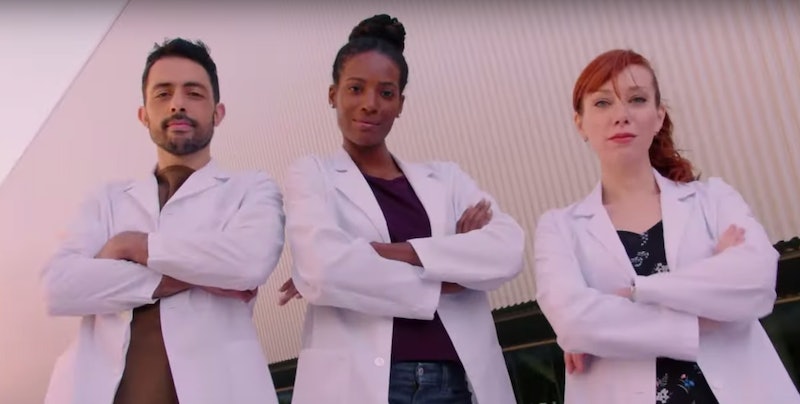 If you gathered together 100 people of varying ages and backgrounds and subjected them to scientific and social experiments, could you gain a pretty decent understanding of human behavior (at least in America)? That’s the hypothesis behind 100 Humans, Netflix's newest half-science, half-comedy series. Netflix has not announced if there will be more episodes of 100 Humans, so its success will likely depend on pulling in high viewership numbers.

In a time when much of the world is holed up in front of their TV screens due to shelter at home ordinances and social distancing practices, it's possible the reality show 100 Humans stands a chance of being a big hit. The first season is practically bite-sized, only eight episodes that are about 30 minutes apiece. The premise is also intriguing enough: helmed by comedians Zainab Johnson and Sammy Obeid and Alie Ward of the educational shows Brainchild and Innovation Nation, the hosts pose a variety of compelling questions. What turns us on? Who is the stronger sex? What is pretty privilege? And what is the proper toilet paper orientation? (The only good, true answer is over and not under, let's all admit that right now.)

With comedians leading the experiments, it's assumed that this show is not meant to be the last word on human analysis, but rather an amusing look at how different people react in certain situations and under various stressors.

The reviews of the show are admittedly not great. The Guardian calls it the "most worthless reality-experiment-pseudoscience show in history." Common Sense Media noted that while 100 Humans may be lighthearted to some people, they disliked that the hosts made fun of some of the contestants, and after a while the "overworked humor and endless examinations gets a little tedious." ScreenRant noted some of the experiments are flawed, and the show "doesn't do much to take into account human error, which makes a lot of their findings questionable." But when has bad reviews ever stopped reality TV from thriving?

100 Humans may not be Emmy Award-winning TV, but per ScreenRant, at least there's some amusing contestants worth tuning in for, like Human #28, Tyanta Snow. Ty made won everyone over with his hilarious honesty, cheerful personality, and knack for bursting into song at any given moment. And hey, if shows about finding love in pods and having a party in your own apartment with all your online friends could find popularity with viewers, perhaps 100 Humans stands a chance too.