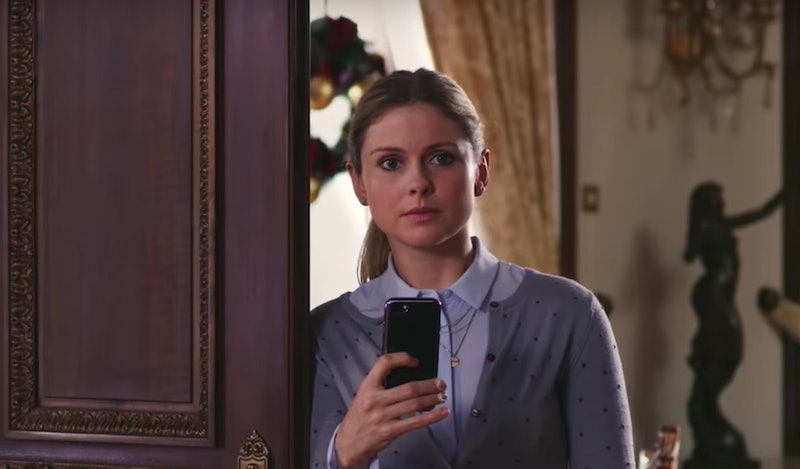 Hear ye, hear ye, the Netflix original Christmas movie A Christmas Prince — not to be confused with A Royal Christmas or A Princess for Christmas — has made quite a splash this yuletide season. And as is wont to happen with any well-received feature film, lots of fans are already clamoring to find out if A Christmas Prince will get a sequel. Unfortunately, it looks like the answer hasn't been unveiled; Netflix has yet to publicly say whether or not another A Christmas Prince is in the cards. So, fans will just have to sit tight.

On Nov. 17, Netflix presented the library with a gift box that was wrapped in red and green paper and topped with a crown. Inside the parcel was a motion picture about an American reporter (played by iZombie’s Rose McIver) who takes a trip to the fictional European country of Aldovia to try to dig up dirt on the prince (played by Ben Lamb). Shenanigans, hijinks, and, yes, romance ensue.

What's that? It's a delightful love story about a prince, a reporter, and the Christmas season that’d fit right in with either Hallmark's holiday lineup or Lifetime's made-for-TV roster (and yes, that’s a compliment)? And it ends with a *spoiler alert* royal proposal? You mean to say it boasts an ending that totally lends itself to a follow-up? Nay, needs a follow-up?

When the reporter meets the heir to the throne, *another spoiler alert* the inevitable happens: She pretends to be the tutor of the princess, she falls for the prince, the prince falls for her, a poem spills some beans, and a Christmas ornament spills some more beans. The movie ends with *yet another spoiler alert for good measure* the prince flying to New York on New Year’s Eve and popping the question to the reporter. And no, his question isn’t “Can you please strike that from the record?”

The Next One Could Take Place During Easter

Think of all of the royal secrets that could be tucked inside plastic eggs! Or hidden inside boxes of stale Peeps! Or nestled in Cadbury Creme Eggs!

Or It Could Be About Their Wedding

There'd be bonus points for a wedding that takes place on Christmas, duh.

Oh, Wait Here It Is

In All Seriousness, We've Gotta See That Wedding

The Princemas Heads Are Counting On A Follow-Up

... No, "Princemas heads" is not the official name of The Christmas Prince fandom, but it shall do for now.

Don't. Let. The. Princemas Heads. Down.

The sequel has got to happen. It's just got to.

Would watch. Would watch all of these sequel ideas.

Some Fans Are Getting Santa Involved

It Isn't Just A Want

You Know It's Serious When Judge Judy Gets Involved

More like this
Here’s Everything Coming To & Leaving Netflix In February
By Jake Viswanath
Twitter Is Mad At The Razzie Awards For Nominating A Child For Worst Actress
By Radhika Menon
Rupert Grint Just Shared A *Major* Update About Ron Weasley’s Future
By El Hunt
Twitter Is Overjoyed By Angela Bassett’s Record-Making Oscar Nomination
By Maxine Harrison
Get Even More From Bustle — Sign Up For The Newsletter
From hair trends to relationship advice, our daily newsletter has everything you need to sound like a person who’s on TikTok, even if you aren’t.