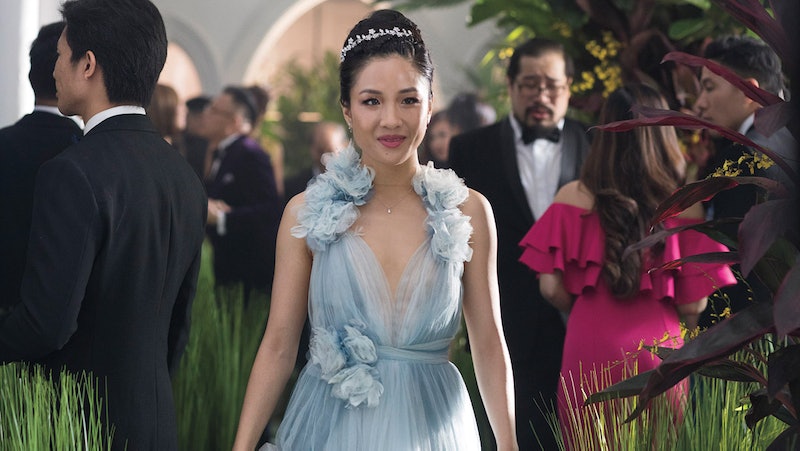 It's a sad bit of trivia stated in almost every article about the big-screen adaptation of Crazy Rich Asians — this is the first American film featuring an all-Asian cast since 1993's The Joy Luck Club. In the intervening 25 years, a lot has happened, and yet diversity in Hollywood remains a sad state of affairs with few bright spots. Now, with a movie chock full of stars both up-and-coming and established, based on a juicy best-selling book series, and of course dishing on the lives of the insanely rich, the question still has to be asked — will Crazy Rich Asians have a sequel? As usual when talking Hollywood, the answer mostly depends on the bottom line.

I say "mostly" because when box office successes happen outside Hollywood predictions and assumptions like, say, "movies starring only women don't make money" or repeated surprise at films about or by black people and their experiences making top box office, they're brushed aside again and again as flukes, leading right back to the status quo. Even Crazy Rich Asian director Jon M. Chu acknowledged the unfortunate bottom line. Speaking to E! about the possibility of a sequel, he said, "It's up to the audience. If people show up to the opening weekend, we would love to tell more story, we'd love to have other people tell their stories as well! But we'll see...it's up to the people who show up."

In another interview, talking to The Hollywood Reporter, Chu said he'd even be willing to drop whatever he was doing if a sequel was greenlit. “I will do whatever they ask me to do. This is so important to me. I will push things aside," said the director.

And there's plenty more story to tell. Crazy Rich Asians was based on the book of the same name by Kevin Kwan, and it's just the first of three books in a series. China Rich Girlfriend is next in the series, but no details are forthcoming about whether it's been snapped up. Interestingly Kwan, who comes from the exact sort of massive family wealth Crazy Rich Asians talks about, sold the novels' rights for just one dollar to production companies Color Force and Ivanhoe, despite a heated bidding war for the bestseller, as EW reports.

Variety reports that when the rights were sold, Kwan said, "I am beyond thrilled that the amazing film my fans around the world have been waiting for is finally happening. I have such tremendous respect and trust in Nina, Brad, Jon, and Warner Bros, and I know they are going to create an incredible, history-making movie.”

If you've fallen for Crazy Rich Asians, then you'll love China Rich Girlfriend, which dishes out a different sort of rich report. As Kwan told Entertainment Weekly, "I think that the first book kind of looked at the clash between new money and old money, and I think in the past two decades in mainland China, there’s emerged this new moneyed class...that’s much less showier than the mainland Chinese of 10 year ago, and they’re much more interested in lifestyle now, and less interested in big name brands and flashy cars."

Sounds less Lifestyles Of The Rich And Famous and more like Kinfolk Gone Wild. There's a lot of potential in a film poking fun at the extremes of living your #bestlife; let's hope audiences provide the poke Hollywood needs to see what landed in their lap when Crazy Rich Asians opens wide on August 15.