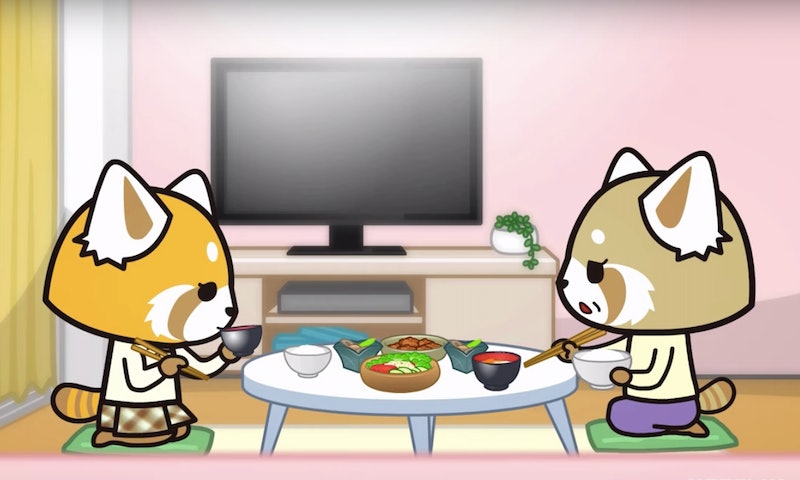 Despite all of her rage, Retsuko is still just a red panda in a cage. The adorable accounting employee at a Tokyo company is angry about a number of things: Her job, her overbearing mother, the burdens of society, and her misogynistic boss, to name a few. As a result of all of this crippling pressure, she lets off steam by performing heavy metal songs at karaoke, thus transforming into Aggretsuko — or, aggressive Retsuko. She's like her own personal superhero — an accountant by day, and a heavy metal musician by night. Her mission? To maintain her sanity. And the Netflix series returns for Season 2 on Friday, June 14, so fans may be wondering if Aggrestuko will return for Season 3.

In short, it's too soon to tell, but there's a good chance the frustrated red panda will come back for more screamo performances. Season 1 had great reviews, and it appears as though the second season will fare just as well, with early responses being positive. Furthermore, the series was renewed for a second season in early July 2018, per IndieWire — after it premiered in April of that year. Then, the lovable panda returned in December 2018 for a holiday special, titled Aggretsuko: We Wish You a Metal Christmas. As a result, audiences may not hear any renewal news for a few more months.

But in the meantime, there is still Season 2 to devour, and it looks to be even more compelling than the first installment. Our beloved Retsuko is feeling pressure from her mom to get married, as we see in the trailer. "Getting married and having a family is a regular part of her growing up!" her mom tells her, insistently, following her around the apartment. "You know that I'm right, don't you? You can't just skate through life!" It's a frustrating yet relatable scene, and it's clear that Retsuko does not like being micromanaged — especially when her future happiness is at stake.

And while the protagonist expressed a desire to walk down the aisle in Season 1, her reasoning was mainly so that she could stop working and become a rich housewife. Furthermore, she had an office romance with her coworker Resasuke in Season 1 — although Haida was secretly pining after her. So will she and the spotted hyena finally get together this season, or will Retsuko go along with her mother's wishes to marry a veritable stranger? Then there's another unnamed character, who seems to be a third love interest for our karaoke-loving red panda. Whatever the case, she states in the trailer, "I think it's time to live for me," so things are looking up for Retsuko.

While it remains to be seen whether she'll choose anyone, fans are enthusiastically shipping Retsuko and Haida. There has been plenty of fan art posted to Twitter and Reddit depicting the two characters, so it's safe to say that whoever this new mystery suitor is won't be a welcome addition to the Aggretsuko universe — at least initially.

So hopefully the red panda will stand her ground and start living for herself, as she stated in the trailer. And while audiences may not hear any renewal news for a few more months, Aggretsuko may very well return for Season 3. After all, it's not over until the red panda stops singing, and Retsuko isn't about to quit karaoke anytime soon.