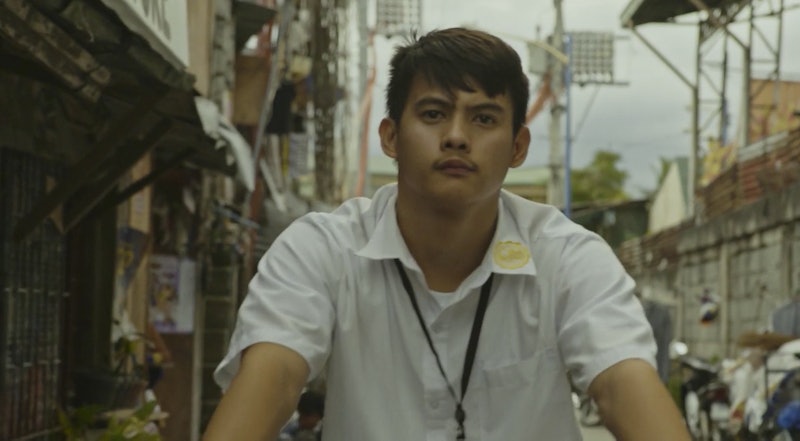 The latest international series to hit Netflix is Amo, which premiered on April 9, 2018. The series examines the the world of drugs and drug conflict in the Philippines, following high-school student Joseph as he ends up getting pulled into the seedy underbelly of the drug trade. And, if you've already torn through the episodes, you could be wondering if Amo will return for Season 2 on Netflix.

The series is the latest in a long line of international series that Netflix is offering as the platform continues to have more and more movies and series that appeal to international audiences. In the past few years, Netflix has brought over Brazilian sci-fi series 3%, Spanish period drama Cable Girls, and the German mystery series Dark. Amo marks Netflix's first-ever Filipino series, according to Variety, and will likely be the first time that many people around the world are exposed to a Filipino television show. The series, produced by Filipino broadcaster TV5, also has a great deal in common with one of Netflix's biggest shows and could use the same viewer interest in the dramatizations of the international drug trade to get English-speaking audiences to learn to love the series. There's no stronger comparison point for Amo's possible success than Netflix's own Narcos.

Netflix's Narcos isn't quite as foreign to American audiences as Amo will be. Amo is an entirely Filipino affair, while Narcos was featured characters, settings, and languages that lent themselves to both America and Mexico. However, what the two shows do have in common is the central conflict at the root of them. Where Narcos covers the real-life story of Mexican drug cartels, Amo tells a story reflective of the Philippines' real and controversial war on drugs. The series' similarities to real-life issues plaguing the Philippines may strike the same true-to-life chord that Narcos does — but that comes with some controversy.

Prior to the series' premiere, the ANPUD (Asian Network of People Who Use Drugs) and the INPUD (International Network of People who Use Drugs) released an open letter against the show expressing concerns that Amo allegedly "promotes and endorses murder and violence in the Philippines." The letter claims "there is an ongoing human rights catastrophe in the Philippines that has seen tens of thousands murdered, all driven by President Duterte’s war on drugs," and expresses frustration that the real conflict in the Philippines "is not the stuff of fun and entertainment. These are real people, real lives. Real murders."

In an interview with The Telegraph, Amo director Brillante Mendoza denied that the series glorifies the drug-related conflict of the Philippines, claiming, "I have this feeling that because I am doing a series against illegal drugs that people are prejudging it ... It will pass through different points of view, different perspectives, depending on the subject matter that we are dealing with."

This controversy marks yet another similarity with Narcos, which had also been criticized by Pablo Escobar's son, Sebastian Marroquin, for allegedly glorifying the violent drug trade in Mexico. Marroquin claimed to Spanish newspaper El Periodico (as translated by Google), "I am not opposed to telling stories, but to glorify the criminals and show the drug trafficking with glamor. This confuses the youth." He continued, "Every day I receive lots of messages from young people asking for help to be like my dad. They want to be that bandit, they send me pictures dressed like him, with his mustache, with his hairstyle, with his sayings, making an ode to violence."

At a TCA panel reported on by Deadline, Narcos executive producer Eric Newman denied claims of glorification. "We took very careful consideration and I think we’re successful in not glorifying these people," Newman claimed. "As much as we may enjoy watching Wagner [Moura] play Pablo Escobar and it’s certainly worthy of enjoyment, he’s a murderer. I don’t think the show in any way glorifies the narcotics business.”

In any case, the fact remains that Narcos is currently working on the series' fourth season. If Amo is able to amass an audience in the same way that Narcos has, a second season streaming rights order for the series seems not only possible, but likely — provided the original network TV5 is interested in doing another run. And, it could premiere as soon as a year from now (the typical Netflix timeline). But, as for whether that will happen, only time will tell.