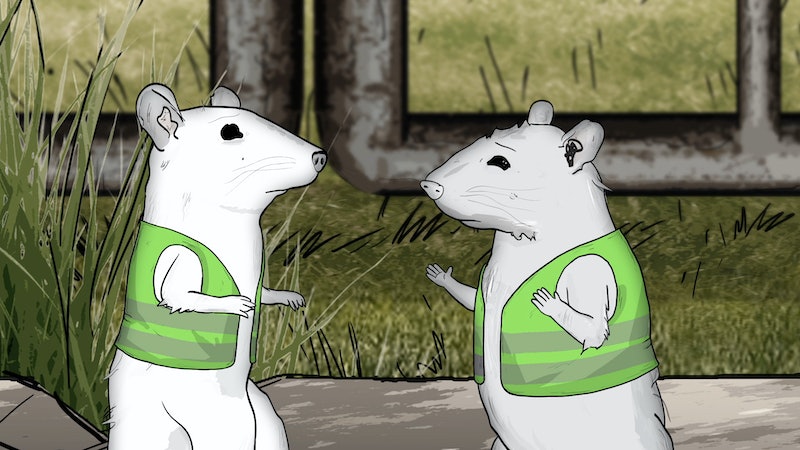 HBO's mostly-animated show about New York critters, Animals, closes out its third season on Friday, Oct. 5 at 11:30 p.m. Titled "Roachella," the episode follows cosmopolitan creatures as they throw a musical festival as a last hurrah before an impending nuclear bomb, which is heading straight for Manhattan. It sounds like an explosive end to an exciting season, and in some ways, it seems like a fitting end to the show itself. So, as of right now, it's unclear whether Animals will return for Season 4 or not.

The HBO comedy is produced by the Duplass brothers and co-created by Phil Matarese and Mike Luciano. Animals first premiered in Feb. 2016 with vignettes of different city-dwelling creatures like rats, pigeons, horses, and dogs trying to navigate life in the Big Apple. However, Season 2 introduced live-action humans like Dr. Labcoat (RuPaul), an evil scientist with a God complex who planned to eradicate the human population of New York City (and succeeded in the finale). For that reason, this season has followed these critters as they continued society on their own. One particularly poignant episode, "Dogs," followed domesticated pooches as they struggle to adjust to life without their owners taking care of them.

"[I]n Season 3, it’s been an interesting wiping clean of the slate," Luciano said in an interview with HBO. "In previous seasons, the animals live alongside humans in New York City. Season 3, there are no humans, and all the animals native to New York City have formed their own boroughs and communities. When it came to writing, those neighborhoods helped dictate each character."

Along with the animals themselves, Season 3 followed Privates Phil and Mike (Matarese and Luciano, respectively), who were caught and imprisoned by the U.S. government. They appeared on the popular reality show, So You Think You Won't Treason?! and narrowly escaped execution with the help of the new Labcoats leader, Executive 3 (Neil Casey). What's more, the U.S. government plans to nuke New York City and eradicate the remaining animals, so their future is also in jeopardy.

As for the Season 3 finale, "Roachella," it follows these New Yorker critters at a huge music festival. "Dude, this is Roachella!" a bunny tells her turtle friend in the finale teaser. "It's like the animal kingdom's Woodstock." Much in the same vein as Parks and Recreation's Pawnee music festival, Roachella will feature the voices of real-life musicians, such as Dinosaur Jr., Moby, Awkwafina, and Donna Lewis. Animals has always had a star-studded cast, and the finale is no exception, with voice performances from Edie Falco, Tatiana Maslany, David Harbour, and more.

So while HBO hasn't announced any further iterations of Animals, neither are they calling tonight's episode the series finale, which may be good news for fans. That being said, even if it does return, it may be awhile. Season 3 was announced in May 2017, per Deadline, but it wasn't released until Aug. 2018. This means that even if HBO renews the series soon, Season 4 may not come back until late 2019.

Not to mention the fact that there's a nuclear bomb heading towards New York, so it may all come down to whether or not the critters survive this impending doom. After all, the show is called Animals for a reason.