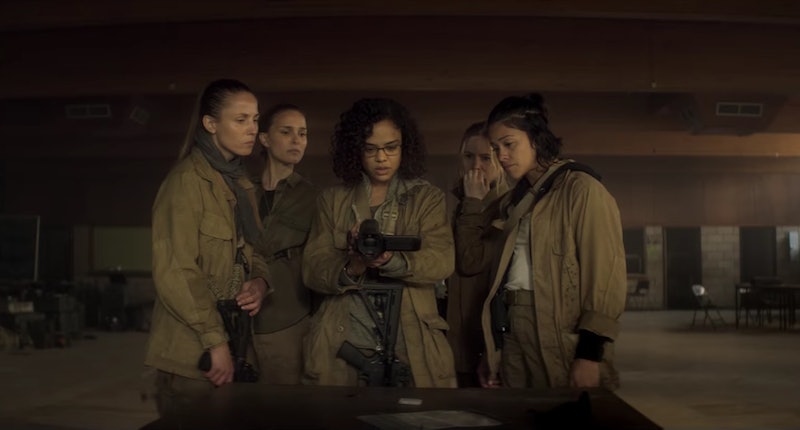 In the new sci-fi action movie Annihilation, a group of scientists travel beyond the Shimmer into Area X in an attempt to find out what awaits in the new, terrifying scientific phenomenon threatening to take over the entire world. The film, starring, Gina Rodriguez, Tessa Thompson, and Natalie Portman, is based on the first book in Jeff VanderMeer's Southern Reach Trilogy. Already, fans are hoping that because it's based on a series, Annihilation will have a sequel and bring the rest of the original books to the big screen, but unfortunately, whether that'll happen is about as mysterious as the Shimmer itself.

When writer director Alex Garland (Ex Machina) began working on his adaptation of Annihilation, the second and third books in the series had not yet been released. And though he was granted early access to VanderMeer's work, Garland made the decision to write his script as a single, contained unit, not Part One of an imagined franchise. "I read book one in galley form — it hadn't been published yet — and so I did not think about those other two books," Garland said in an interview with ComingSoon.net.

The filmmaker added that he has "zero plans" to adapt either of the other two books in the series, and it's not because he objects to the material. He's against the very idea of helming any franchise, saying, "I actively do not want to be in the same world I just spent three years in, I actively want to do something else, so the whole idea of sequels is not one that appeals to me in the slightest."

Just because Garland isn't interested in bringing the next two books, Authority and Acceptance, to life doesn't necessarily mean that no other installment in the Southern Reach Trilogy will receive the big screen treatment. Franchises have been known to switch up directors and even writers between films, including The Twilight Saga and Star Wars. It wouldn't be abnormal for a new director to be brought in to direct a possible Annihilation sequel.

Bringing in a new director for a sequel would be tricky, however, as the movie is a very loose adaptation of the novel. In other words: it's truly Garland's vision of the book, not a faithful adaptation that would necessarily lead into a sequel. "Themes of what it means to be human are pulled out and expanded on," wrote VanderMeer on Facebook about the differences between the movie and his book. "While some other themes in the book aren't as prevalent in the movie — in part because the movie is stand-alone and some elements in Annihilation are setting up things in the second and third books."

As a movie, Annihilation was never really meant to have a sequel. And, despite what fans of the original trilogy might be hoping for, that might be for the best. Rumblings of behind-the-scenes conflict have drawn a cloud over Annihilation's release, and the movie is no longer receiving a worldwide theatrical release. Instead, the movie will play in theaters in the U.S., Canada, and China, released by Paramount Pictures, but will have a separate streaming release in other countries via Netflix. The move is innovative, not unlike Netflix's recent surprise release of The Cloverfield Paradox, but it also doesn't put much confidence in the idea of a sequel.

Limiting Annihilation's movie theater release will severely limit its box office potential, and while that may make the movie more profitable in the end, it also makes it way less likely to drum up any buzz for a sequel. Still, you never know — perhaps the movie will find the success and the audience it deserves, So while fans shouldn't count on an Annihilation 2 movie to come out anytime soon, make sure to enjoy Annihilation for the creative, compelling movie that it is.

More like this
A New Scooby-Doo Movie Confirmed Velma Is Gay & Twitter Is Pumped
By Radhika Menon
These 25 International Horror Movies On Netflix Prove Fear Is A Universal Language
By Bustle Editors
Everything You Need To Know About ‘Black Panther: Wakanda Forever’
By Bustle Editors
Alan Rickman's Diary Reveals Why He Considered Leaving 'Harry Potter'
By Darshita Goyal
Get Even More From Bustle — Sign Up For The Newsletter