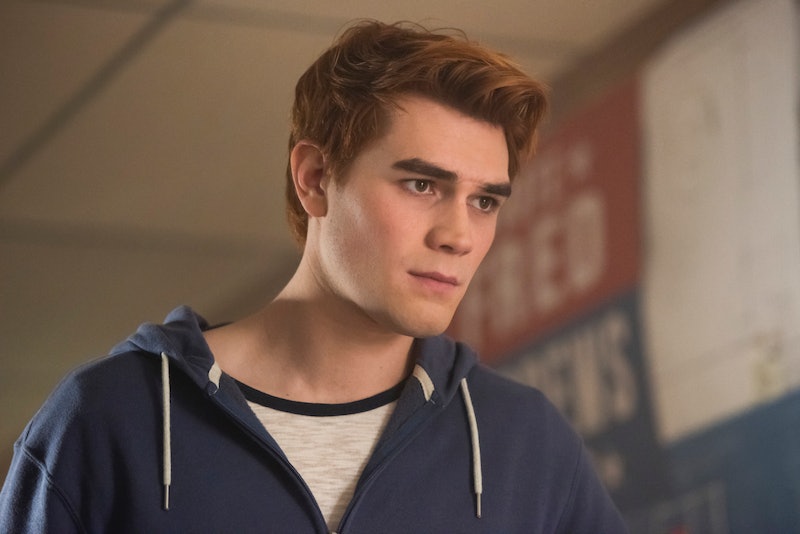 Major spoilers for the Season 2 finale of Riverdale ahead.

The finale of Riverdale Season 2 brings an end to the saga of the Black Hood, but that doesn't mean that Archie is getting any time to relax. Following his victory in the Riverdale High School student election, Archie is arrested for murder. The high schooler got into some dark hobbies during Season 2, and they're coming back to haunt him. If Riverdale sends Archie to jail in Season 3, he's not going to be locked up without a fight. After the events of Season 2, it seems that Archie and friends have united the Northside and the Southside against their common enemy, Hiram Lodge.

The knowing glance shared between Archie and Hiram at the end of the Season 2 finale indicates that Veronica's dad is behind Archie's arrest, which means his teen target is going to have quite the uphill battle to face. Now that Hiram has teamed up with the Ghoulies, he has an army to physically intimidate those who might try to help Archie, and by combining his wealth with the Blossoms' drug money, Hiram has plenty of disposable income to spend on lawyers who could probably secure a life sentence fr an innocent person with the snap of their fingers. Archie might be able to stay out of jail by proving that he's innocent of Cassidy's murder, but that's going to be a lot easier said than done.

The murder in question occurred in the episode "Chapter Twenty-Seven: The Hills Have Eyes." Cassidy was part of a group of young men who tried to rob Archie, Veronica, Betty, and Jughead while they stayed at the Lodge family cabin. Archie chased Cassidy into the woods to try and get a piece of Veronica's jewelry back from him, and Archie decided to leave Cassidy alone in the woods with Hiram's assistant, Andre. Archie left the forest, and Andre shot Cassidy.

There are no witnesses to Cassidy's death, because it happened in the middle of the woods, and Andre is unavailable for questioning because he's dead now too. Archie's friends could testify to his character that he wouldn't kill someone — but this is the same Archie who formed a vigilante group and did Hiram's dirty work for most of Season 2, meaning that the prosecution could easily paint a negative picture of Archie for a jury. The defense of "I was the last person to see Cassidy alive and the person I claim shot him is dead" isn't a particularly convincing one, even though the audience knows it's the truth.

The most interesting thing about this cliffhanger is that it is a change from Riverdale's usual pattern. Season 1 and 2 of Riverdale both started with a central mystery — who killed Jason Blossom in Season 1, and who is the Black Hood in Season 2. Season 3, however, will not be starting with a mystery in the traditional sense. The question of whether or not Archie will be going to prison looms over the break between seasons, but there's nothing that needs to be solved. While past seasons encouraged fans to develop and debate their theories, this device is a little different.

With such a big departure from the show's past, there is no telling what direction Riverdale could go in Season 3. Will it lean heavily into becoming a legal drama surrounding Archie's trial? Will Hiram's takeover of the Southside push Riverdale into full-scale drug warfare in the vein of Breaking Bad or The Wire? If Riverdale is leaving mysteries in the show's past, then this could be a fresh new start for Season 3 — even if Archie begins it behind bars.