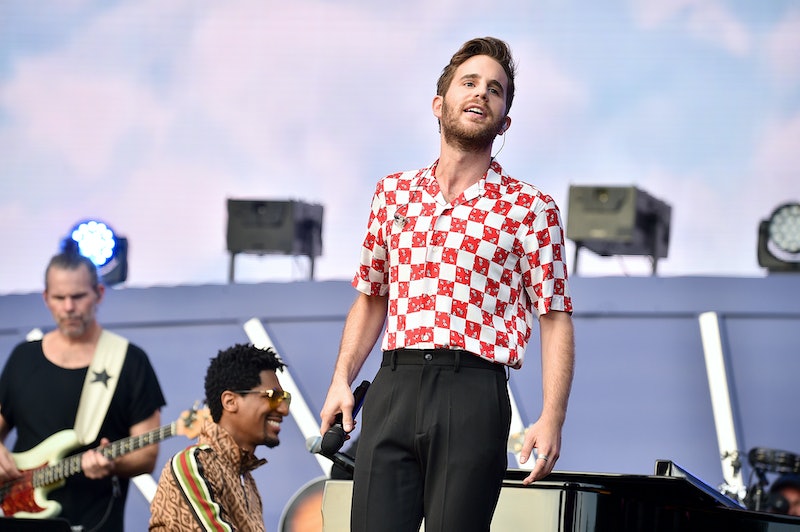 You may be familiar with actor Ben Platt from his roles on Broadway and in the Pitch Perfect movies and Netflix's The Politician, but he's also a solo artist. Earlier this year, Platt released Sing To Me Instead and supported his debut record with a month-long tour in the States. He then travelled across the pond to perform a one-off show at Hammersmith's Eventim Apollo in June, but will Ben Platt tour the UK?

Looking at the singer's site, it doesn't seem that he's got any live dates on the cards. Bustle reached out to Platt's rep to see whether a UK tour may be in the pipeline, but have yet to hear back. The actor could fit some live dates in from now until the end of 2019, but filming is set to begin pretty soon on the second series of The Politician as Radio Times reports. So fans of Platt may have to wait until sometime in 2020 for a chance of a tour.

Although, it seems that the singer does have a penchant for surprise performances, as was the case a few weeks before the release of his album. As Broadway World writes, Platt "gave exclusive performances" in New York and Los Angeles, followed by "returns to both cities for a pair of extraordinary pop up events".

So could another pop-up show for us Brits be on the cards? Maybe. In an interview with iNews during his Eventim Apollo, Platt expressed that he will come back to the UK to perform soon. But as the actor mentioned in a recent interview with HuffPost, this year is the first time he's had to"juggle multiple projects at once".

From his role on The Politician, his debut album, and the possibility of his broadway show Dear Evan Hanson being adapted to the big screen, he's got a lot on his plate. That and the fact Platt's also considering writing his own musical, as he told iNews. But working alongside the iconic Gwyenth Paltrow in the series has given him a lot of inspiration.

"This is the first time that I'm experiencing having to juggle multiple projects at once — nowhere near the level of running her empire — but watching Gwenyth be present with me in a scene, go and make important decisions with her team for Goop on the side in between, and then come back and be in the moment again, was very inspiring."