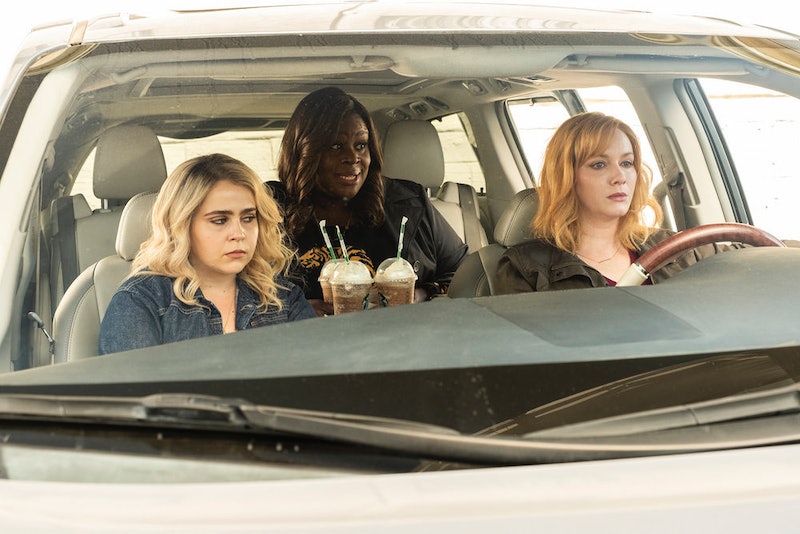 Spoilers ahead for the Good Girls Season 2 premiere. Beth, Ruby, and Annie are already deep into criminal territory, but their latest predicament may force them to make the leap from robbers to murderers. Leslie was a nuisance for the women throughout Season 1, but now that he's talking to the FBI, he's a legitimate threat, and could end up sending them to jail. The final moments of the Good Girls Season 2 premiere suggest that Beth will have to kill Leslie to get him out of their way, but are they really willing to cross that line? Holding up a store is illegal, yes, but taking someone's life is another thing entirely — even if that person is someone as abhorrent as Leslie.

So far, Beth, Ruby, and Annie are have pulled off a few robberies, committed fraud, and tampered with evidence, but Rio's criminal activity is on a different level. Earlier in the March 3 episode, Rio shot Beth's husband right in front of her just to prove how pissed he is after she tried to cross him. At this point, it looks like the series isn't asking "Will Leslie die?" but instead "When will Leslie die, and who will pull the trigger?"

While Beth, Annie, and Ruby don't want to become murderers, they'd probably be the first to admit that they wouldn't mind if he just happened to not be in their lives anymore. The three have tried to avoid violence, instead using their wits to get out of the many sticky situations that have arisen since their first robbery. However, whatever is in the bag that Rio hands Beth at the end of the Season 2 premiere is probably not an instructional guide to tricking Leslie into skipping town. What's most likely going to happen is that one of the three is going to have to "take care of him" — a crime that Ruby's already conflicted husband Stan will surely hear about.

Unfortunately, going through all the work to kill Leslie likely won't be the end of their problems. What neither the trio nor Rio knows is that Leslie might have a fiancé if his proposal in the Season 2 premiere is accepted. Leslie has proposed to Mary Pat to try and protect her, using the logic that a husband can't testify against a wife, and therefore he wouldn't have to reveal under oath that she extorted money from Beth, Annie, and Ruby.

Should Leslie die, Mary may take up the torch of her late fiancé (even if their marriage is more about convenience than love) and testify to the FBI that she took money from the three and is aware of their criminal activities, or else implicate them in some other way to get the heat off of herself. Would someone then have to kill Mary? How far does this go and when does the killing end? Unfortunately for Beth and co., it appears that they have truly reached the point of no return. These Good Girls may have to drop the "good" permanently.

More like this
We Still Have A Few Unanswered Questions At The End Of 'The Suspect'
By Sophie McEvoy
'Grey's Anatomy's New Intern Got Advice From Dr. Bailey Herself
By Grace Wehniainen
Where Is Lionel Dahmer Today? Jeffrey Dahmer’s Father Reflected On The Serial Killer’s Death In 2020
By Brad Witter
Here's What Jeffrey Dahmer's Dad Has Said About His Other Son, David
By Grace Wehniainen
Get Even More From Bustle — Sign Up For The Newsletter