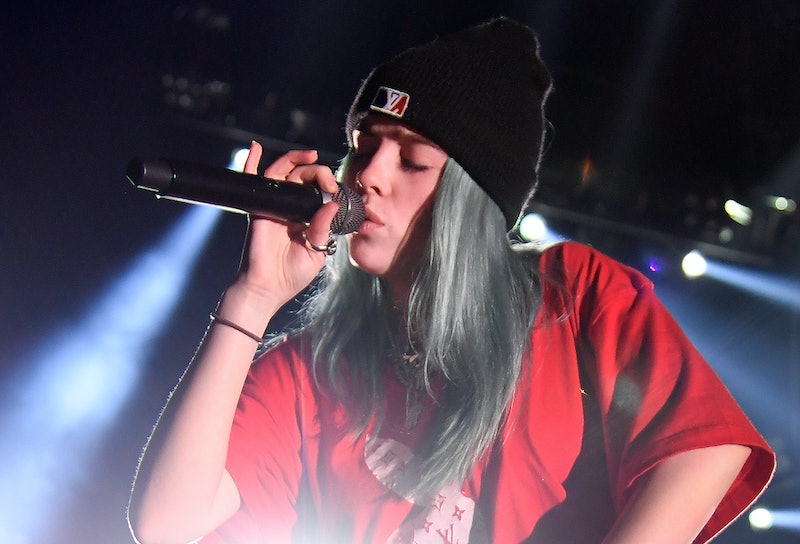 American singer-songwriter Billie Eilish has been making serious waves in the world of music. The 17 year-old's 2019 album When We All Fall Asleep, Where Do We Go? received critical acclaim upon its release, and Eilish recently became the youngest ever solo female act to debut at number one on the UK Albums Chart. But will Billie Eilish tour the UK in 2019?

According to the "Wish You Were Gay" singer's official website, Billie Eilish will not be going on tour in the UK this year, however, fans still have a lot to look forward to, because Eilish is scheduled to perform at some seriously exciting events across the UK in 2019. The U.S. singer's first stop in Blighty will be on Saturday, May 25 at the Radio 1's Big Weekend 2019 in Middlesborough. Eilish will then take the stage at one of the world's biggest music festivals, when she performs at Glastonbury.

And Glasto wasn't enough, fans can also look forward to seeing the "You Should See Me in a Crown" singer live at the 2019 Reading and Leeds Festivals on Saturday, August 4 and Sunday, August 5, respectively.

As previously mentioned, Eilish recently broke a UK Albums Chart record when she became the youngest ever solo female act to top the chart. According to the Metro, the singer-songwriter rocketed to the number one spot with sales of 48,000, and when celebrating the good news, the 17 year-old told the Official Charts, "I appreciate you making WHEN WE ALL FALL ASLEEP, WHERE DO WE GO? the #1 album in the UK so much. We worked really hard on this album. Thank you for the love!!"

Eilish has overtaken the previous record holder, Joss Stone, as the youngest woman to top the Official UK Albums Chart. Stone bagged the title back in 2004 at just 17-years old with her record Mind, Body & Soul. And that isn't the only title currently held by Eilish's 2019 album, because When We All Fall Asleep, Where Do We Go? is also the biggest international debut from a solo artist since Lana Del Rey’s Born To Die back in 2012.

Eilish previously opened up about the struggles of fame during an appearance on Zane Lowe‘s Beats 1 radio show. According to NME, the singer compared fame to having a child, losing a loved one, and depression. She said, "There’s only a few people in the world that can understand this. There are some things in life that you just can’t understand unless you see it right in front of you. When someone you love loses someone very close to them, you can’t say, 'I feel you.' You just can’t. That’s okay. You don’t have to be like, 'I understand,' when you don’t. It’s just about listening. I feel like some people just try to act like they know, but just listen. It’s not about trying to up their depression. It’s not about who’s sadder, who’s gone through worse. It’s about listening to people and actually just caring about them."

You can find tickets to Billie Eilish's upcoming UK dates on the singer's official website.