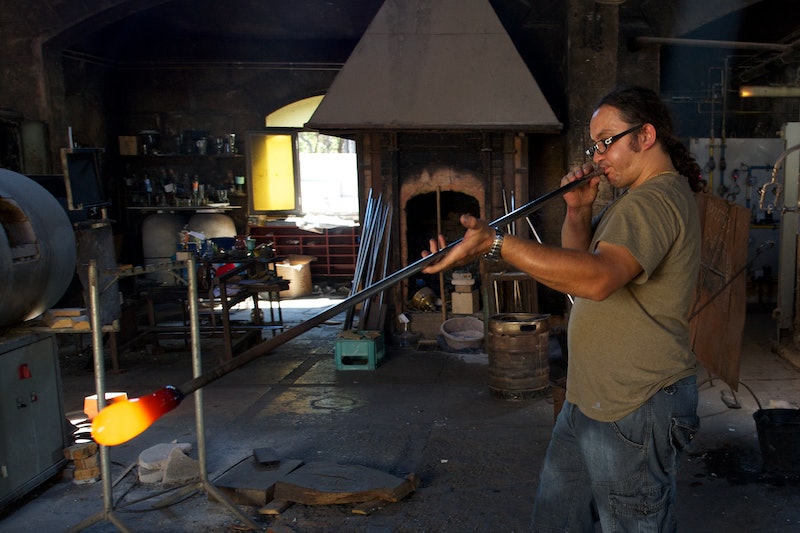 If you love competition shows that aren't about food like Forged in Fire, Netflix's Blown Away might be your new obsession. Debuting on July 12, the series follows a group of skilled glassblowers vying to gain international fame for their art. Of course, we don't yet know if Blown Away will return for Season 2, but there's something fascinating about watching people with extraordinary talent compete under time constraints and extreme pressure, so if it strikes a chord with viewers, there's no reason to believe it won't be back.

Per Netflix, Blown Away Season 1 features 10 artists, each of whom will go through several rounds of challenges to score prizes valued at $60K and a lifetime supply of bragging rights as the champion glassblower. It's a niche craft that many people admire but don't know a lot about, so that alone is enough to make curious viewers want to tune in for at least one episode, right?

And Blown Away's trailer gives a captivating sneak peek of the fire, skill, determination, and high-stakes action you can expect. In it, host Nick Uhas asks the 10 artists if they're ready to get to work, and they immediately do. The competition is held in a large warehouse which, according to Architectural Digest, was built specifically for the show and features 10 workstations, 10 reheating furnaces, and two melting surfaces, so all of the contestants can work side by side in the blazing heat. Architectural Digest also notes that Blown Away producers drew from a number of glass experts from across the industry — including The Craft and Design Glass Studio at Toronto’s Sheridan College, Pilchuck Glass School, and Corning Museum of Glass — to make sure the facility was built properly, share advice with the contestants, and evaluate them during each round.

Elsewhere in the trailer, you can see some of the amazing work created by the artists, including hands, spiral globes, whales, and other creations. But there's a fair amount of broken glass, too, and the judges don't hold back: one tells a contestant that her work looks like it belongs "in a gift shop." Ouch.

According to a voiceover in the trailer, the Blown Away winner will get a life-changing package of prizes that will lead to international recognition. Per Architectural Digest, that package includes being a featured guest at the Corning Museum of Glass for a week, as well as participating in a residency and getting to perform live demonstrations. So, it's a pretty big deal that can lead to more opportunities and visibility for the winning artist. And even those who don't win will certainly get their names out there as people to know in the glassblowing industry.

For their sake, then, hopefully Blown Away will be back for Season 2. It's a fascinating look at an art that is rarely featured on television, and it should make for a watch that's both interesting and heated — literally, because of all the fire, and figuratively, because of, you know, the competition.

More like this
Everything We Know About When To Expect Money Heist: Korea Part 2
By Kadin Burnett
Move Over, 'Sunset'! The Drama-Filled Trailer For 'Selling The OC' Is Here
By Nola Ojomu
Here’s Everything Coming To & Leaving Netflix In July
By Grace Wehniainen
What’s New On Netflix: The Return Of 'The Umbrella Academy'
By Arya Roshanian
Get Even More From Bustle — Sign Up For The Newsletter