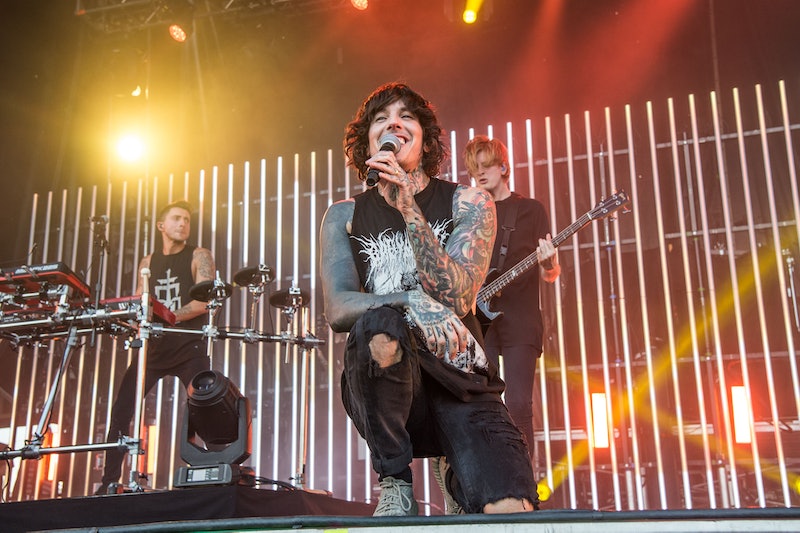 After releasing their sixth album amo in January this year, it's no surprise that Bring Me The Horizon have a pretty busy schedule this summer when it comes to festival appearances. But with a new album comes the expectation that the band will play individual shows rather than festival slots, so will Bring Me the Horizon tour in 2019, or will the band's only UK performance be at Glastonbury?

Looking at the tour dates listed on their site, it doesn't look like they'll be doing an actual tour this year. Instead, they've got multiple festival slots lined up in Europe, Japan, and North America this summer and autumn. I've reached out to the band's rep to see whether a tour at the end of this year or in early 2020 is a possibility, but have yet to receive a reply. I'll let you know if I do.

Bring Me The Horizon did tour the UK, Europe, and Australia last autumn in prep for amo's release, with the UK portion starting on Nov. 23 in Birmingham and ending at Alexandra Palace in London on Nov. 30. Their last festival date this year is on Oct. 27 at Voodoo Festival in the U.S., so a late 2019 tour isn't entirely off the cards. Especially since they also went on a relatively short but hectic North American tour in the spring promoting the new album, which also included two festival dates in Florida and North Carolina.

In the meantime, British fans will have plenty of opportunities to see BMTH this summer. After headlining All Points East on May 31 in London, BMTH have around twenty festival slots from now until October, including Glastonbury where they will be performing on The Other Stage on Sunday (June 30) alongside Japanese metal band BABYMETAL. As Kerrang! reports, BABYMETAL will be on first for 40 minutes, then BMTH will perform for an hour. This will be the band's second time playing at Glastonbury, with their first being on the same stage in 2016.

"Playing Glastonbury and all these other festivals is mental because when we started we didn't have any aims to play anywhere, we just wanted to play shows because we liked going to shows and we all played instruments," singer Oli Sykes told Exposed Magazine in 2016. "We never had any idea this would happen, but it's crazy, and everything's an achievement — like playing a show with nobody booing!"

"I remember playing our first couple of festivals, and it was weird to cross over in that sense as we were still an underground band. But nowadays it's pretty good playing the big shows."

And they've got plenty of big shows on their roster this year aside from Glasto, including the likes of Lollapalooza in Stockholm (June 29) and Chicago (Aug. 2), Roskilde in Denmark (July 5), Summer Sonic Festival in Osaka (Aug. 16) and Tokyo (Aug. 17), and Aftershock in Sacramento (Oct. 12).

Even though it's possible that the band may tour the UK later this year, I'd be betting on a 2020 tour so keep an eye out.