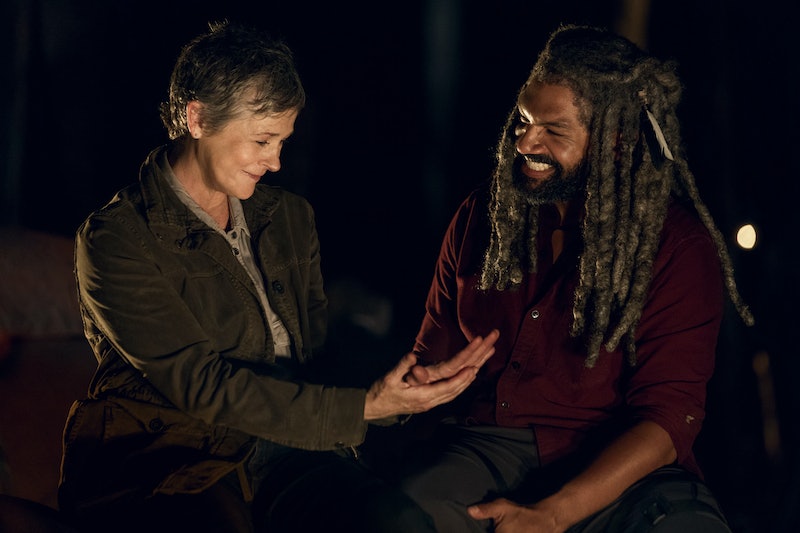 While Ezekiel had a big old smile on his face when Carol asked him for the engagement ring during "The Bridge," Carol and Daryl 'shippers were probably shaking their heads in disapproval. But even if you think Carol and Daryl belong together (because they do), there's no denying that Carol's relationship with Ezekiel has brought some levity and sweetness to this season. She decides to "try" the ring on while she's gone leading the Saviors and even Caryl fans had to chuckle when Carol stopped Ezekiel from going down on one knee at this moment because the king had, of course, written a speech.

Walking down the aisle together is a drastically different path from the one that Carol and Ezekiel's comic counterparts go on. Comic spoilers ahead. Like the TV show version, Carol is one of the first survivors introduced in the graphic novel. With her daughter Sophia, she joins Shane's group. (Her husband is already dead and there's no indication he had abused her like Ed had on the show.) From there, the two Carols diverge drastically.

While TV Carol becomes a confident, badass loner, the same can't be said for comic Carol. She sadly defines her worth by whether or not other people want her. She starts dating Tyreese, but he cheats on her with Michonne. She then offers to be in a polyamorous relationship with Rick and Lori Grimes, but they reject her advances. She decides to commit suicide but beforehand, she sleeps with Hershel's teenage son. The next day, even though her daughter Sophia is still alive, Carol allows a walker to bite her neck and she dies. So yeah, a totally different from the Carol who once cloaked herself in walker guts to save everybody from the Terminus cannibals.

Carol dies while the group is still living in the prison, so her fate in the comics was sealed long ago. She never even had the chance to meet Ezekiel. As for the king of the Kingdom, he interestingly dates the very same woman who led to the breakup between Carol and Tyreese — Michonne. In the comics, Michonne also dates Morgan, but in the TV series, she's pretty much the first lady of the zombie apocalypse as Rick's partner. As for what else happens to Ezekiel, it's better to see how the AMC series will tell the story.

So Carol and Ezekiel's relationship isn't based on Richard Kirkman's graphic novels and there's no precedent for what will happen. But with this relationship going so well, you should probably start worrying that Carol or Ezekiel could die. But hey, look on the bright side. If Ezekiel joins his dear Shiva in death, then maybe Carol and Daryl can still get their happy ending.

More like this
Viserys’ Fate On 'House Of The Dragon' Could Differ From The Book In This Surprising Way
By Grace Wehniainen
'The Lord of the Rings: The Rings of Power' Revisits Iconic Spots From 'The Hobbit'
By Darshita Goyal
Ruth Wilson’s New Thriller Spotlights A Controversial Irish Institution
By Darshita Goyal
'Heartstopper' S2 Just Welcomed Four Brand New Cast Members
By Nola Ojomu and Sam Ramsden
Get Even More From Bustle — Sign Up For The Newsletter