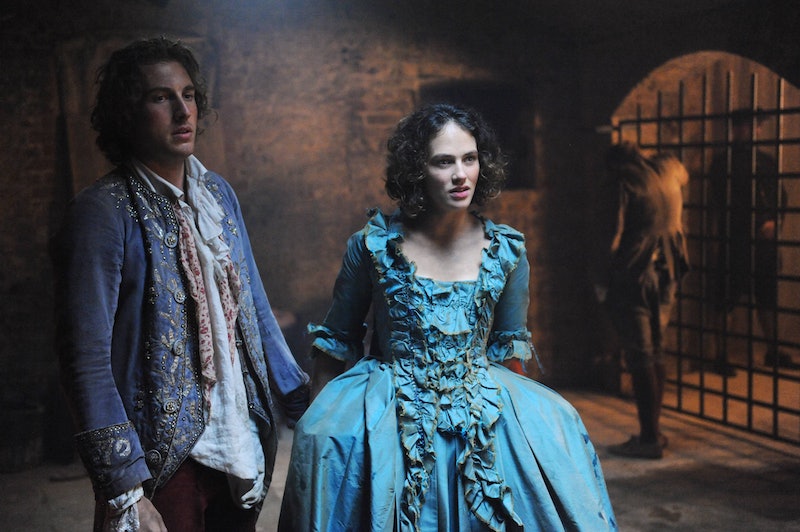 As a consumer of culture, it's easy for me to get caught up in the ways Hulu's Harlots is winning at representation and telling a feminist story about a historical period that was oppressive to women. I almost forget that this is also a dramatic show with twists, turns, actions, and characters whose well-being I really care about. In this exclusive clip from the Harlots season finale, an alliance forms that could set off a dangerous chain of events.

Leading up to the finale, Charlotte has been arrested for the murder of her keeper Howard — a crime which, of course, was committed by her mother and sister. Charlotte just wants to be free to control her own destiny, whatever that means for her. While she had nothing to do with Howard's death directly, it is an unfortunate twist of fate that her mother's actions have ruined her chance at escape, and maybe even love. So naturally, their mother/daughter tension has risen to a boil. Any resentment that Charlotte has about her life and how her mother has raised her will come to play in the finale.

The clip shows a surprising, but possibly inevitable turn of events. Charlotte is confronted by Lydia Quigley, Margaret's rival. The two haven't really shared screen time together, but it's clear that they know each other — and that Lydia thinks Charlotte could be of use to her now that she has been released from prison.

Charlotte's smart. She's not going to be easily seduced by Lydia. I'm not too worried about her getting kidnapped. However, Lydia's connections to high society men and judges in particular could be of use to Charlotte. The women may decide to use each other, and it'll be exciting to see how that all unfolds.

Lydia won't let a debt go unpaid and, while it's not exactly a team-up, this is definitely a betrayal of Margaret Wells. Charlotte's mother may not be perfect, but she needs all hands on deck right now. Even if both women are completely in control, this alliance is not going to end well.

More like this
Lydia Leonard Is Setting The Record Straight
By Olivia-Anne Cleary
Sandra Bullock, Girlboss Extraordinaire
By Matt Harkins & Viviana Olen
Spice Girls’ Net Worth: The Richest Member Is Wealthier Than The Rest Combined
By Hugh McIntyre
What’s New On Netflix: A Victoria Justice Rom-Com & The Return Of David Letterman
By Arya Roshanian
Get Even More From Bustle — Sign Up For The Newsletter