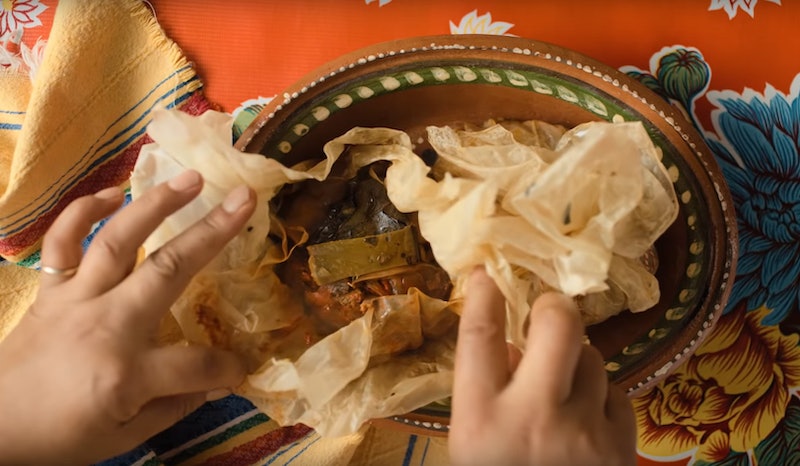 For four seasons, amateur chefs and foodies from across the globe have fawned after the world's most coveted five-star dishes on Chef's Table. And soon, it will be five: the reality series will drop another batch of episodes on Sept. 28. But if after that you're still craving more, you're in luck, because Chef's Table is returning for Season 6.

Netflix actually announced the show's fifth and sixth seasons at the same time. According to Eater, the next installment will premiere sometime in 2019 and feature four new, talented chefs: Mashama Bailey, Sean Brock, Asma Khan, and Dario Cecchini. Bailey is the chef at The Grey, a restaurant in Savannah, Georgia that serves southern-style eats out of a refurbished Greyhound bus station. As reported by Mic, she became the first African American woman nominated for the Best Chef award at the prestigious John Beard Awards in May — a major accomplishment, even if the prize ultimately went to Rodney Scott BBQ owner Rodney Scott. And fun fact, though Bailey was born in the Bronx, Eater notes that her family has roots in Georgia; Her parents even got married across the street from where The Grey is now located.

Up next comes another take on southern cooking from Sean Brock, a Charleston chef famous for reviving southern dishes. Per the New York Times, that includes several thought-to-be extinct crops, such as Carolina Gold rice, Webb Watson corn, and Sea Island red peas. According to Eater, Brock has been at least partially credited with revitalizing the Charleston restaurant scene since 2006, when he took over fine dining restaurant McCrady's. He also owns his own restaurant, Husk, with four locations: one in Charleston, one in Greeneville, one in Savannah, and the newest in Nashville. In fact, per Food & Wine, Brock announced in August that he'll be moving to Nashville to focus on his growing Husk empire, severing his involvement with Minero, McCrady’s, and McCrady’s Tavern.

The third chef, Asma Khan, is the first British cook to ever appear on Chef's Table, writes Eater: London. Per the outlet, she hails from London, where she runs the Darjeeling Express — a city favorite known for its all-female staff. Khan was raised in Calcutta, India, moved to the UK in 1991, and then headed back to cook India in the homes of her family members and study 1930s Royal Nawabi and Mughal cuisine. According to her personal website, she has a doctorate in British constitutional law, and started Darjeeling Express as a supper club before setting aside her legal career in 2012 to pursue cooking full-time. She now runs a multitude of different supper clubs around London.

Last up is butcher and chef Daario Cecchini, from the Chianti region of Italy. According to his website, he's been a butcher for eight generations, metaphorically speaking, and maintains his family's traditions in his work. Traveller notes that Cecchini is widely considered the best butcher in Italy, and has three restaurants: the upscale Officina dela Bistecca, the "butcher's kitchen" Solociccia, and his personal take on fast food, Mac Dario.

Netflix hasn't confirmed a premiere date for Chef's Table Season 6 yet, so now that you know who the featured culinary artistes will be, you might want to go ahead and book yourself a reservation at one of these top-notch eateries before they get even more popular than they already are. Bon appetit!

More like this
Where Was 'The Bachelorette' Season 19 Filmed? More European Destinations Are On The Way
By Radhika Menon
Kim Kardashian’s “Gym Time” Video Features A Bikini & Thigh-High Boots
By Grace Wehniainen
Kathy Hilton Tried To Explain Why She Misidentified Lizzo As Precious On Live TV
By Jake Viswanath
Akshay Is Still Single After Reversing His Marriage Curse In 'Indian Matchmaking' Season 2
By Kadin Burnett
Get Even More From Bustle — Sign Up For The Newsletter