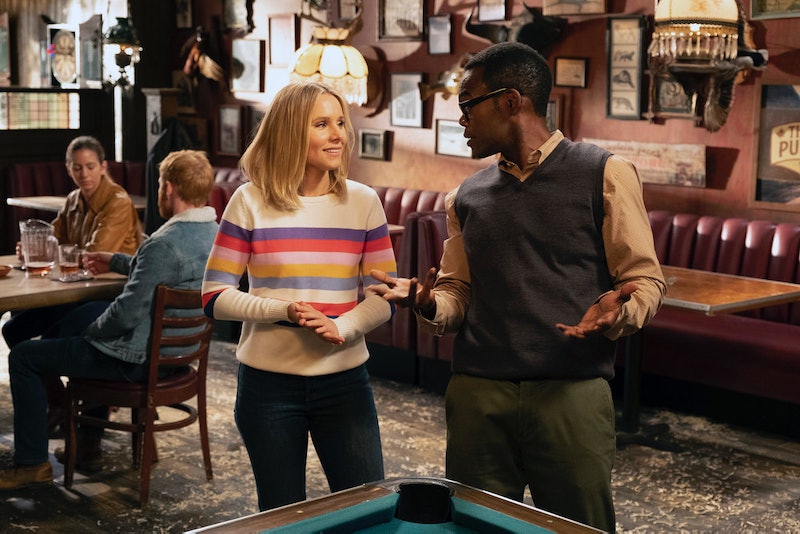 First, let's back up for a second, because why the fork would Chidi decide to throw away such a good relationship when it's only getting started? It is, of course, all because of the dastardly Shawn. After Michael realized that nobody's gotten into the actual Good Place in an absurdly long time, he and Shawn made a deal with the Judge. They've agreed to run one last simulation to see if four more humans, unburdened from the complexities of real life, can become better people in the same way that Tahani, Eleanor, Chidi, and Jason did. If they succeed, the Judge will adjust the points system to account for how difficult making the "right" decisions has become down on Earth.

But Shawn throws a wrench in their plans, because, as already established, he's "a naughty b*tch." The Bad Place demon is tasked with choosing the four people, and as it turns out, the original humans have personal connections to them. Not only is Tahani's biggest critic — a celebrity blogger named John — one of the newest recruits, but so is Chidi's ex-girlfriend, Simone. Although her memory's been wiped, Chidi concludes that he won't be able to teach Simone ethics without accidentally letting something about their history slip, and he doesn't want the fate of humanity resting entirely on his shoulders — which, fair. As a result, he decides that the only way to effectively continue with the simulation is to reboot himself, too.

Since Chidi is the human embodiment of a bundle of nerves, it's refreshing to see him make such a weighty decision so resolutely. That said, it's heartbreaking to think about poor Eleanor, who will remember everything, and Chidi, who won't. She's clearly distressed by the situation and laments to Janet, "What's the point of love if it's just going to disappear, and how is it worse to not love anybody?"

It's a valid question, but rather than give Eleanor an intellectual answer, Janet decides to empathize. With each reboot, the being becomes more and more human — her feelings for Jason more intense. "If there were an answer I could give you to how the universe works, it wouldn't be special," Janet says. "But since nothing seems to make sense, when you find something or someone that does, it's euphoria. In all this randomness and this pandemonium, you and Chidi found each other, and you had a life together. Isn't that remarkable?"

Her eloquent speech is a more elevated version of that hackneyed Dr. Seuss quote: "Don't cry because it's over; smile because it happened." And while Janet doesn't promise that everything's going to be OK, she reminds Eleanor that it's important to cherish the experiences she and Chidi have had together (which Michael has compiled into a beautiful highlight reel). So although nothing is for certain, and Chidi could fall for Simone instead of Eleanor (they do have chemistry, after all), it's heartening to think about how many times the couple have been rebooted and still found each other before. And why should this time be any different? After all, Eleanor is "a legit snack."

In an interview with Bustle, showrunner Mike Schur said that relationships are more circumstantial than fate. "What we're trying to say is that there isn't necessarily one version of a relationship you can have with someone," he said. "That, you know, I really love my wife dearly and I never want to be married to anybody else. But I'm also totally aware that when we met, if she had been married to somebody else happily and maybe I had been married somebody else happily, that she and I — I think that we're very compatible people and I really like her in addition to loving her — but there's a version of the multiverse out there where she and I are just very good friends."

This seems to imply that Chidi and Eleanor aren't necessarily fated to be together as much as like each other and have chemistry. After all, there were reboots where they didn't get together at all — where they had other soulmates and were simply friends. That said, they fell in love plenty of times, too — hundreds, as Eleanor says. So although we can cross our fingers and hope for the best, there's also the real possibility that their love story was both beautiful and finite.

Despite the fact that this new neighborhood looks like the Good Place and feels like the center of hell, it's nothing Eleanor Shellstrop can't handle, because her best friend will be there, too. "Every time you see me get a stomachache, imagine I'm thinking of you," Chidi says, which, as we know, is all the time.