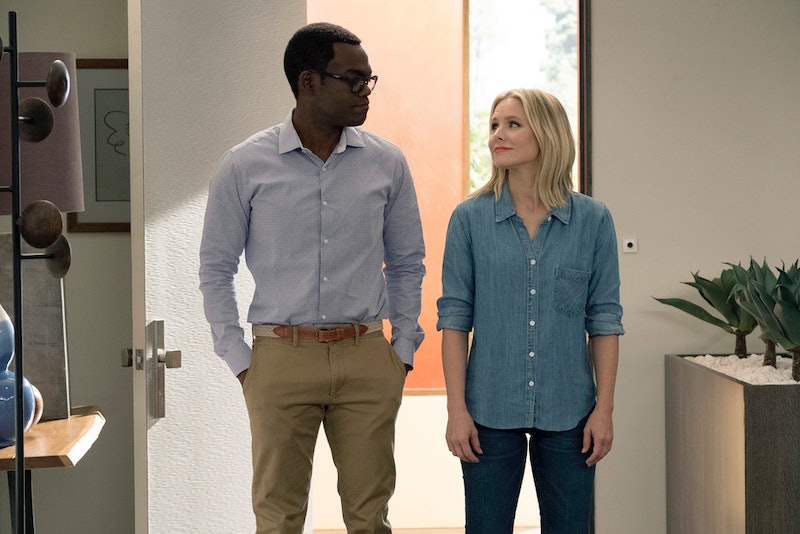 Spoilers ahead for The Good Place Season 3, Episode 6. It seems like every week Michael drops another bombshell on Eleanor. First it was the existence of the Good Place, then it was that her mother is still alive. Now, on Thursday's episode, Michael revealed that Eleanor and Chidi dated in the Good Place during one of the reboots. The episode ended with a stunned Eleanor asking, "We did what now?"

Because the humans' memories were reset with each reboot, Eleanor has no idea how close she got to Chidi during her time in the Good Place (or, rather, the Bad Place). She and Chidi slept together in eight of the reboots, told each other they loved each other in one, and kissed again right before getting sent back to earth. There's definitely an underlying chemistry and love there, even if they haven't figured it out in this new earth timeline yet.

Well, Eleanor knows now. But in one of the reboots, she and Chidi watched their love confession and Chidi rejected Eleanor by saying he didn't feel that way anymore. In the Season 3 earth timeline, Chidi is coming off a breakup with Simone — which means, at this point in time, he probably won't be receptive to Eleanor bringing up their own romantic history.

But that doesn't mean the two won't ever get back together. Creator Mike Schur told The Wrap that Eleanor and Chidi's underlying romance is a big part of the series.

"It's a core tenet of the show. The two of them have a special relationship, I guess. I don’t know how to describe it, even. It’s kind of like, incredibly complementary friends who provide something for the other one that he or she doesn’t have. And then there’s also an incredibly strong romance. There’s a strong sense that these two are almost fated to be together."

Did you hear that, 'shippers? Eleanor and Chidi are (almost) fated to be together. As for when such a fated romance could be reignited, it doesn't necessarily need to be far into the future. As Bustle's Caitlin Gallagher pointed out, Schur's other shows have often paired up fan favorite couples relatively early — and left them paired up. Jim and Pam got together in Season 3 of The Office and stayed that way for the rest of the show. April and Andy got married in Parks and Rec Season 3 and stayed together until the end. Ben and Leslie also got together in Season 3 of Parks and Rec. Hmm... is there perhaps a trend here? Maybe Season 3 will be the lucky number for Chidi and Eleanor as well.

If/when Chidi and Eleanor get together for real, you can count on the relationship being just as OTP as those other couples. Schur told Vanity Fair that his show romances are inspired by his own. "Part of it’s real life," Schur said of writing these sweet, long-lasting, relationships. He continued:

"That’s my relationship with my wife, I would say. I love her, and I like her. That, to me, is the essence of a good relationship. You can love people, and the relationship will be a disaster; you can like people, but you’re not sort of like meant to be together forever. In order to have like a truly wonderful, deep, rich relationship, friendship, or whatever it is, you have to both love and like people."

Hopefully Eleanor and Chidi can get the love and the like parts down soon, because they're clearly meant to be together. Their rebooted selves just need to figure that out again.