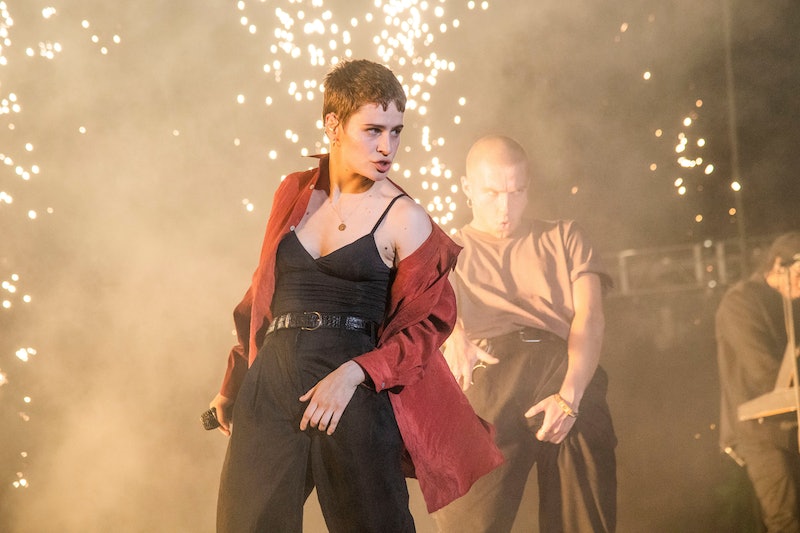 French singer-songwriter Héloïse Adelaide Letissier, who is known professionally as the lead-singer of Christine and the Queens, burst onto the UK music scene back in 2014 following the release of her critically acclaimed debut-album, Chaleur Humaine. Since then, the 31 year-old has gone on to be recognised at prestigious industry events such as the BBC Music Awards, the NME Awards, and at the 2017 Brit Awards, where she was nominated for Best International Female Solo Artist. But will Christine and the Queens tour the UK in 2019?

According to the official Christine and the Queens website, the singer will indeed be performing in the UK — and very soon. On Saturday, June 8, the "Girlfriend" singer will perform at the 2019 Parklife Festival, and joins a lineup that includes the likes of George Ezra, Solange, Khalid, Disclosure, Mark Ronson, and many more. Tickets to this year's festivities are available to purchase on the Parklife website, or alternatively, you can find tickets on the singer's official website.

According to the Metro, Christine and the Queens are also set to make a spectacular return to Glastonbury Festival, and the French songwriter will take to the stage on Sunday, June 30. Tickets were previously available to purchase on the festival's official website, however they are now listed as being completely sold out. According to the website Glasto Feed, those hoping for a last ditch attempt at nabbing tickets can try their luck in some 2019 Glastonbury competitions — some of which are currently offering tickets as prizes.

Christine and the Queens first ever Glastonbury performance took place the day after the UK voted to leave the European Union back in 2016, and was met with glowing reviews from music critics. One review by Barry Nicolson for NME referred to the singer as a "fascinating focal point" of the festival, and described Christine and the Queens as being an "all-conquering phenomenon in her homeland." Another review by Shaun Curran for the Independent also showered the French-native with nothing but praise, and declared that her set was "the knock-out show of the day."

Following her triumphant Glastonbury debut, it's fair to assume that many festival-goers will be looking forward to the singer's upcoming 2019 set. According to the BBC, other exciting acts to be included on this year's Glasto lineup include headliners Stormzy, The Killers and The Cure, who are set to perform alongside the likes of Janet Jackson, Kylie Minogue, and newcomer Billie Eilish.

Although this year's festival has yet to take place, fans are already looking forward to Glasto 2020 — which will become the 50th Glastonbury Festival. To mark the special occasion, Glastonbury founder Michael Eavis, and co-organiser Emily Eavis, are set to release a book which aims to commemorate the iconic music and arts festival. Speaking to the Guardian about the upcoming release, Eavis said, "With our 50th anniversary fast approaching, we felt now was the time to put all of our memories and stories together in one place. It’s been a total joy to look back through piles of old photo albums and scrapbooks and to reflect upon what it meant at the time, and the incredible evolution of the event."

As exciting as this sounds, we still have the entire 2019 Glastonbury festival to look forward to later this month, and I cannot wait to stream this year's incredible acts.