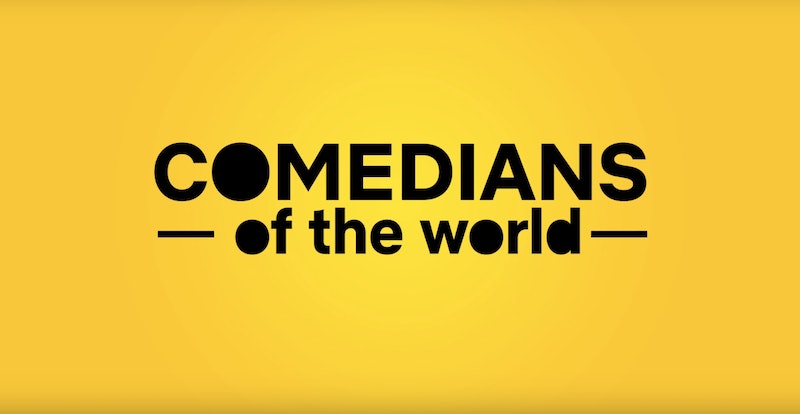 In the past couple years, Netflix has been embracing both international and stand-up comedy content, and one new project aims to blend the two together. Comedians of the World features well-known American comics as well as heavy hitters from around the world who might not otherwise easily reach an American audience. It's unclear if Comedians of the World will return for Season 2, but the show's premise could definitely lend itself to a long, multi-year run.

According to a Netflix press release, the series features 47 comedians from 30 regions who are "diverse in style, gender and ethnicity." The standup sets are expected to be taped in multiple languages including French, Spanish, Portuguese, Arabic, Dutch, German and English.

This kind of gathering of international comics, if successful, could be an amazing platform for up-and-coming stand-ups trying to earn their big break.

But, as noted by Forbes' Andrew Husband, the sheer volume of comics featured in the series could present another problem of its own — it may be difficult to truly appreciate each and every set the way they should be. "Forty-seven individual half-hour sets is a lot of material to crunch through, as its totals nearly 24 hours of stand-up," Husband wrote. "If Comedians of the World was a sitcom, then its New Year's Day debut would amount to two standard seasons' worth of episodes — or over three seasons' worth, if the total episode counts per season were less than 20."

But, he continues, maybe the point isn't for every single set to resonate with every single viewer — Netflix instead seems to want audiences to use the show as a way of stumbling upon a few new favorites. “Few things are better than discovering a new comedian you love,” Netflix's VP for Original Documentary and Comedy, Lisa Nishimura, said in the release linked above. “With this event, we’re creating a true comedy festival experience for our members where they can scour the globe from home to find some of the freshest voices in comedy.”

There will be familiar faces present to anchor American viewers' experience with the show, though hopefully they aren't the only ones U.S. audiences will take note of. Neal Brennan, Chris D'Elia, Nick Swardson and Nicole Byer head up the local bill, and though they might not be full-fledged household names, they've definitely solidified their places in the comedy community as heavy hitters.

Brennan was a co-creator of Chappelle's Show, and also wrote for Funny or Die and The Daily Show before bringing his own poignant special, Neal Brennan: 3 Mics, to Netflix last year. D'Elia is an established actor and comic with more than 700,000 followers on Twitter and a Netflix special, Chris D'Elia: Man on Fire, of his own. Viewers might recognize Swardson from his various collaborations with Adam Sandler, his outrageous role on Reno 911!, and a few Comedy Central specials of his own. And Byer made a name for herself as a hilarious commentator on MTV’s Girl Code before hosting Netflix’s hit baking show Nailed It! and creating her own podcast.

The notoriety of these stateside comics bodes well for the expected quality of the rest of the lineup. Netflix has been the home of some of the buzziest comedy specials in recent years, and this could bring even more interesting figures to the forefront. Comedy fans are never worse off after exposure to comics from other cultures, and if Comedians of the World is a hit, its format could continue for years to come.