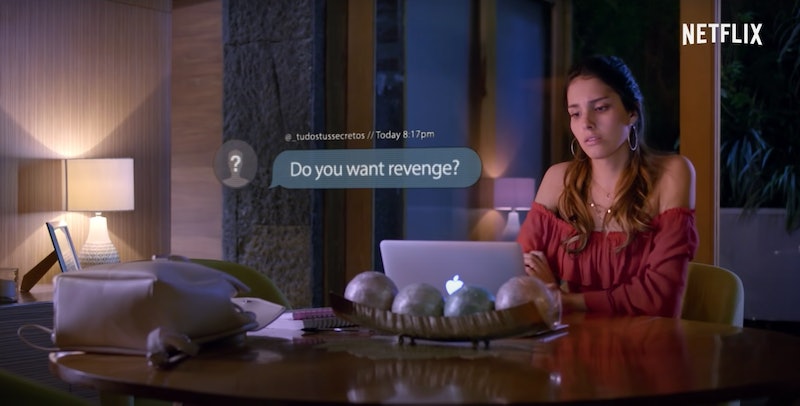 Get ready for your next Netflix obsession. Mexican teen drama Control Z is Gossip Girl meets Mr. Robot, with just a touch of Sherlock Holmes. The entire first season drops on Netflix on May 22 — and with this kind of drama, anyone who gets hooked will want to know, will Control Z return for Season 2? The show's creator is already prepared for renewal.

Control Z follows loner Sofia (Ana Valeria Becerril), whose high school classmates are being threatened by a hacker. The hacker's first target is a student named Isabela, who is revealed to be transgender. Taking over a school assembly, the hacker shows footage of Isabela's younger self wishing to be a girl. It's a heartbreaking moment and one that spurs Sofia to action.

“There’s a hacker behind this, ” Sofia says in the trailer. “I want to know who did it.” Sofia partners with a new classmate, Javier (Michael Ronda), who is equally as determined to get to the bottom of the hacking — before anyone else's secrets are revealed. We could find out,” he says. “I think it could be fun.”

The show was picked up by Netflix from Lemon Studios, whose VP Carlos Quintanilla was also the show's cowriter and developer. Speaking to Produ, Quintanilla teased they'd already planned a continuation of the story beyond the first season's eight episodes, if it were to be renewed. While there's yet to be any update from Netflix about whether or not there will be another season, at least fans can take solace in the fact that the team has plenty of ideas to kick off Season 2 when and if they get the green light to continue.