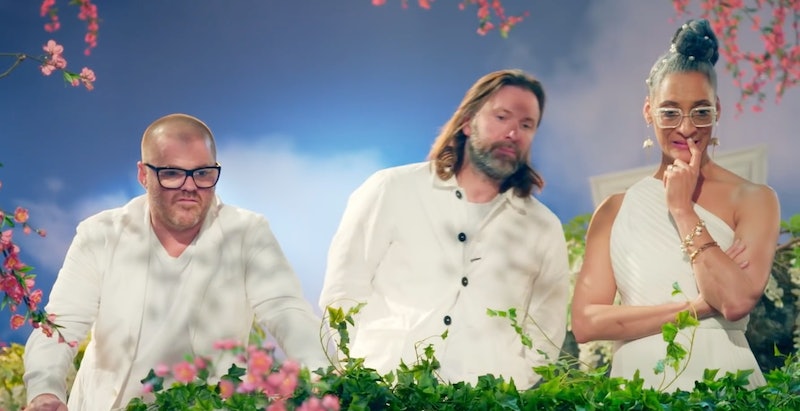 Netflix plays host to a variety of different cooking shows, and it's looking to expand its library of chef-centric shows with Crazy Delicious, a competitive cooking show that leans heavy on the whimsy. Though the show's short inaugural season has already made its premiere in the U.K. back in January, it has yet to make its debut here stateside. That all changes come June 24, when Crazy Delicious drops on Netflix, in all of its Willy Wonka-esque six episode glory. Knowing that it's already made its debut earlier this year, some fans might already be wondering: will Crazy Delicious return for a second season? It's complicated.

For those not in the know, Crazy Delicious is a cooking competition that leans heavily on the "themed experience" of dining. Think: Dominique Crenn's poem-focused tasting course at Atelier Crenn in San Francisco, or Albert Adriá's TICKETS in Barcelona. Presentation plays an important role in both of those dining experiences, and the same can be said for the Crazy Delicious experience.

The core of the show is familiar: a variety of chefs compete to win over a panel of judges, which, in this case, includes such prominent chefs as Carla Hall, Niklas Ekstedt, and Heston Blumenthal. But where Crazy Delicious stands apart is that it's shot on an almost entirely edible set. It's Charlie and the Chocolate Factory meets Great British Bake-Off. Part of the competition sees the chefs going out to "forage" their ingredients from the edible wonderland where the show is set. In the trailer, chefs pull carrots right from soil, or eat shiny, glossy dew drops right off of a large mushroom. It's an especially precious — not to mention highly unique — presentation, but was that novelty enough to earn Crazy Delicious a second season?

There is currently no confirmation of either a renewal or cancellation from Channel 4 — Crazy Delicious' home network — and there isn't anything from Netflix, either. And so far the show hasn't received the most stellar reviews across the pond. The series' been panned by a few U.K.-based critics, according to review aggregator site Rotten Tomatoes. Many of the critics seem to agree on one point: that the show's over-the-top nature doesn't help or improve the core "cooking competition" premise of the show.

Ultimately, we'll have to wait and see if the wildly whimsical Crazy Delicious will earn a second bow.

More like this
Everything We Know About When To Expect The Rest Of The Upshaws Season 2
By Kadin Burnett
Bachelor Nation's Blake Horstmann Is Dating 'Love Is Blind' Star Giannina Gibelli
By Jake Viswanath and Radhika Menon
Move Over, 'Sunset'! The Drama-Filled Trailer For 'Selling The OC' Is Here
By Nola Ojomu
Here’s Everything Coming To & Leaving Netflix In July
By Grace Wehniainen
Get Even More From Bustle — Sign Up For The Newsletter