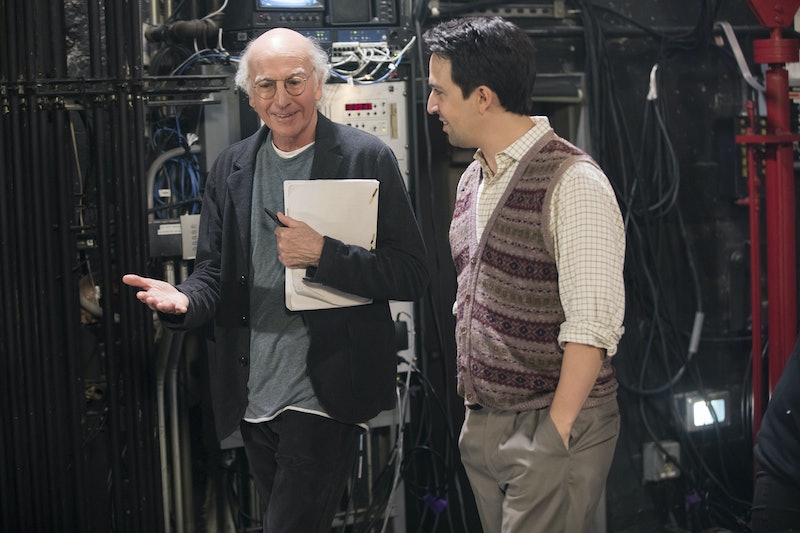 On Curb Your Enthusiasm, the fictional version of Seinfeld co-creator Larry David was the avatar for anyone who's struggled to navigate social situations or gotten deep into an embarrassing faux pas. But after six years off the air, his observations are as specifically honed as ever in the show's long-awaited ninth season. And, now that the new season is coming to an end with a big, Lin-Manuel Miranda guest arc and Fatwa: The Musical, will Curb Your Enthusiasm return for Season 10? While it's still a bit soon to predict when more episodes will premiere, the outlook is pretty positive. The season opened with HBO Sunday's biggest ratings, 1.5 million viewers, according to TV By the Numbers. However, the comedy fell short of the top spot of the night, with Adult Swim's Rick & Morty at almost three million viewers. But clearly, even if it's not the most popular comedy on TV, it's still a valuable asset to the network. And, it was delivering a lot to fans, as well.

UPDATE: On Dec. 14, The Hollywood Reporter reported that Curb Your Enthusiasm has been renewed by HBO for Season 10.

EARLIER: Curb Your Enthusiasm executive producer Jeff Schaffer told Entertainment Weekly that the episodes in Season 9 routinely topped thirty minutes because of David's many, many ideas. "We ended up with way more than 10 episodes worth," Schaffer said. And Schaffer was quick to add, "I wouldn’t bet on Larry running out of ideas. That’s what I’ll say." And it sounds like Schaffer is right, because on the eve of Season 9's Oct. 1 premiere, Larry David told The Hollywood Reporter that there won't be a huge hiatus between the ninth and potential tenth season. "If I do another season, I’m not going to wait five years — that I can tell you," David told THR at the season premiere.

David also told EW that in the past half-decade, he's been collecting more and more ideas, to the point that the ninth season of Curb was "stuffed" with material. "In the intervening years, I was able to accumulate a lot of ideas, so the shows are kind of… dense," David said. It sounds like after time away, David is feeling particularly inspired, so there could potentially be more episodes next year. JB Smoove, who plays Leon, the persistent houseguest who's become one of the show's funniest and most memorable characters, said to Metro that perhaps a Leon spinoff could eventually be possible. "Who knows, man? Maybe there will be a spinoff one day where Leon is a psychiatrist," Smoove said. "He might become a guru. He could easily become a guru." Susie Essman told Metro that Larry David is "seriously thinking about season 10." And reportedly, "several cast members" told Vanity Fair that David seemed to enjoy making Season 9 more than usual, making them optimistic about the chances of a possible Season 10 happening, as David said, without a significant hiatus.

So don't worry too much when the ninth season of Curb ends with what might seem like a point of no return. Schaffer explained to The Hollywood Reporter that David likes to wrap up seasons of Curb with some finality, leading to several season finales that feel like series finales. "When he’s done with the season, he’s put all these great ideas in the story, so he’s out of ideas." Schaffer even references the fifth season finale's title: "The End" (the eighth season finale, when Larry winds up in Europe, also comes to mind). But that wasn't the last-ever episode of Curb Your Enthusiasm, so no matter what happens during the hour-long Season 9 finale, know that there's a very good chance that this won't be the last you hear from Larry David — both the fictional and real versions of the comedian have a lot more to say.

More like this
Ava DuVernay Thought The 'Queen Sugar' Series Finale Felt “Really Satisfying”
By Brad Witter
The ‘White Lotus’ Cowboy Theory May Spell Danger For Tanya
By Grace Wehniainen
Theo James Revealed The Truth About His 'White Lotus' Nude Scene & Fans Can't Cope
By Stephanie Topacio Long
The 'Kenan & Kel' Reunion On 'SNL' Took A Dramatic Turn, Thanks To Keke Palmer
By Brad Witter
Get Even More From Bustle — Sign Up For The Newsletter