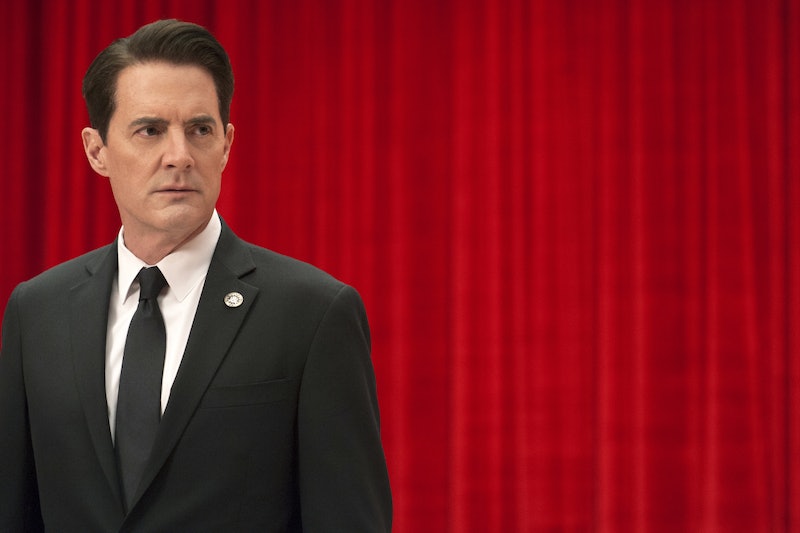 Suzanne Tenner/SHOWTIME
By Samantha Atzeni
May 28, 2017

This moment has been 25 years in the making. As Showtime's Twin Peaks: The Return continues to welcome fans home to the Northwestern town, those fans are both reminiscing and making new memories. In addition to all the supernatural and heady metaphysical questions this new season of the show has the ability to answer, there are also some outstanding interpersonal plotlines to address. This time around, will Dale and Audrey finally get together?

When the show first premiered, audiences were intrigued by the young femme fatale Audrey Horne (Sherilynn Fenn), who was infatuated with FBI Agent Dale Cooper, played by Kyle MacLachlan. Since there is so much secrecy surrounding Twin Peaks: The Return, it is unclear what co-creators David Lynch and Mark Frost has in store for the characters, but 25 years may be enough time to revisit the fan-favorite Audrey/Cooper storyline.

In an interview with The Hollywood Reporter, Kyle MacLachlan was tight-lipped about the roads his character — and any Twin Peaks character — might be taking in the 18-episode revival. The secrecy sits well with him, and in his opinion, will maximize the experience for fans. "I love that people are going to be embarking on this fresh," MacLachlan said. "For something that's so well known, it's going to be a whole new journey. I think that's wonderful."

So far, the first few episodes of Twin Peaks: The Return have focused on setting up the new story, revisiting old characters, introducing new ones, and getting Dale the heck out of the Black Lodge. Fenn's character hasn't even appeared yet, so it is unclear if or when Audrey Horne will reunite with her FBI special agent. Fans know that the Twin Peaks universe can be fickle.

All signs pointed to a possible romance in Season 1 of the original series, but the narrative changed in Season 2. In an interview with A.V. Club, Fenn claimed it had to do with the real-life relationships among the cast. "I’m not supposed to say it," the actor said. "But David [Lynch] knows I tell what happens, and what happened was that Lara [Flynn Boyle, who played Donna] was dating Kyle [MacLachlan], and she was mad that my character was getting more attention, so then Kyle started saying that his character shouldn’t be with my character because it doesn’t look good, 'cause I’m too young. Literally, because of that, they brought in Heather Graham [who played Cooper's love interest Annie Blackburn] — who’s younger than I am — for him, and Billy Zane for me. I was not happy about it. It was stupid."

That's only one side of the story, and neither of the other actors have publicly responded to Fenn's take. Nevertheless Audrey and Dale, didn't get their romance. But a lot of time has passed since the storyline was reportedly squashed, and Audrey is no longer a schoolgirl. That means there's a chance for the two characters to rekindle what they started in Season 1 of the original Twin Peaks. If Dale can get back to his old self, that is.

It may be too soon to tell whether Dale and Audrey will finally find happiness, but there still are tons of surprises waiting to be revealed in Twin Peaks: The Return. If a new romance is one of them, 25 years of 'shipping these two may finally pay off.