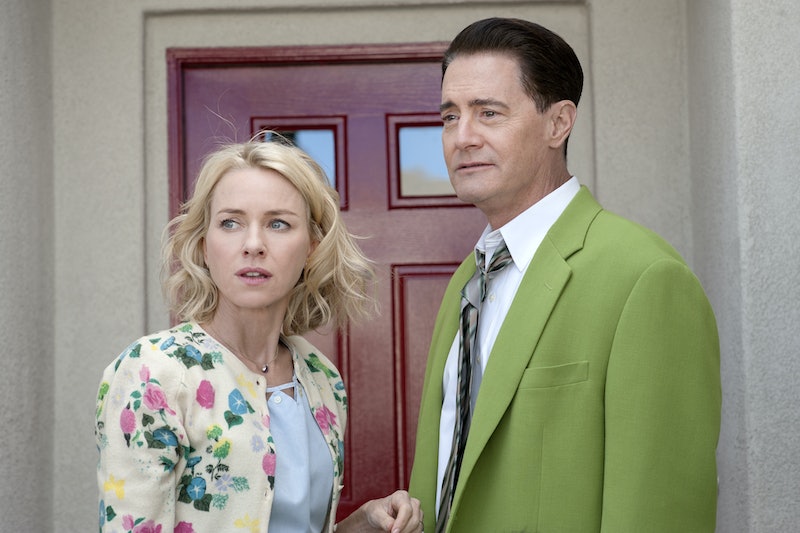 Oh, Dale Cooper. Poor, sweet, mixed-up Dale Cooper, who continues to amuse as much as he frustrates on Twin Peaks: The Return. It's not his fault; traveling through different dimensions via electrical outlets would scramble anyone's brain. As Dale Cooper returns to normal on Twin Peaks, the pressing concern now is whether or not his memories actually return, too. Living the doppelgänger life ain't easy, but someone's gotta do it. Then again, when can fans get the old Dale back?

In "Part 5" of Twin Peaks: The Return, Dale still only repeats one word at a time and has to have people like Dougie's wife, Janey-E Jones, and Dougie's co-workers push him from place to place and give him cues about how to act. But there's evidence that the old Dale is fighting to break through as he is offered more opportunities and cues to reconnect with his old self.

When we reconvene with Dale, Janey-E is coaxing him into the car so they can all get on with their day. She proceeds to drop him off at work, where Dale lingers outside for a little bit, clearly at sea in this bustling environment. As he stands outside Dougie's office building, he's greeted by a co-worker, who is carrying two trays of coffee. Dale leans over to smell the coffee and follows the co-worker into the building, lured in by the enticing, caffeinated aroma. As the two men stand in the elevator, Dale keeps sniffing the coffee. Eventually, the co-worker hands over a cup and Dale sips greedily.

Even those familiar with Twin Peaks in passing know that Dale's coffee obsession is epic, the love for this elixir is deep and abiding. It's no shock that drinking coffee has a reviving effect of Dale. As he clings to his coffee, he continues to get pushed around like a shuttlecock on a badminton court. Co-workers are chatting to him, ordering him to sit down during a meeting, and so forth. All the while, it looks like someone might be at home in Dale's mind after all, but he's not really back to normal. Keep doing your job, coffee. We need our Dale Cooper back.

The opportunity for Dale to get his memories back also arises after a minor skirmish during a meeting where Dale, unprovoked, called one of Dougie's other co-workers a liar. This results in Dougie's boss demanding to see Dale after the meeting. After the meeting, the boss proceeds to ream Dale out, berating him for missing work and going after one of the best agents at Dougie's job, which happens to be an insurance company. The word "agent" sticks with Dale, who repeats it.

Again, it looks like a bell is being rung deep in the recesses of Dale's mind, but there's no breakthrough moment. It happens again when Dougie's boss gives Dale a stacks of case files to review that evening. It would appear that the task of reviewing files, something fit for either an FBI agent or an insurance agent, might provide another opportunity to jog Dale's memory.

It's no doubt frustrating to see that Dale's not immediately returning to his old self in the Twin Peaks revival. That said, some serious progress has been made. Coffee, case files, and one evocative word: "agent." Dale's on track to becoming his old self again, but I just wish it would happen sooner rather than later.