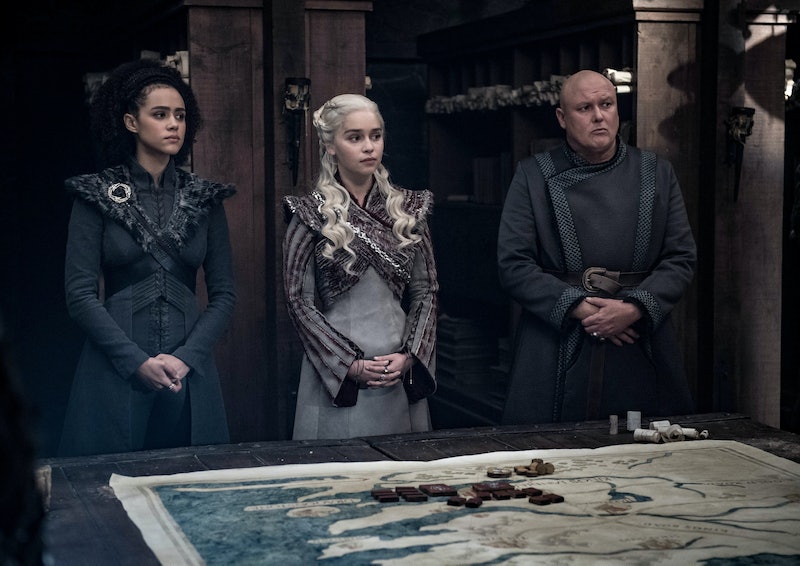 With only two episodes left to go in the show's history, there are bound to be plenty more deaths before it's all over: but only one of them is absolutely guaranteed. Will Dany kill Varys on Game Of Thrones? Viewers already know that the Spider will die — the one question that remains is how. Will he be a casualty of the upcoming Battle for King's Landing? Will he have some final reckoning with the magical forces that he so fears? Or will Daenerys Targaryen burn him alive as a traitor?

The latter scenario seems by far the most plausible, given everything about Varys, his fate, and his relationship with his queen. It's already a foregone conclusion that the Master of Whisperers has to die before the series ends in two weeks; Melisandre told him as much last time they interacted. In the third episode of Season 7, "The Spoils Of War," the Red Woman told Varys she was leaving Westeros for Volantis, after having brought Jon (ice) and Dany (fire) together. Ever distrustful of magic, Varys encouraged Melisandre to never return to the Seven Kingdoms. "I will return, dear Spider," she promised. "One last time. I have to die in this strange country… just like you."

Of course, the priestess recently fulfilled her half of the prophecy: she returned to Westeros to help the army of the living in their war against the army of the dead and, when her role in the battle was complete (including helping Arya realize her destiny to kill the Night King), she took off her magic necklace and decayed into dust. Melisandre's long life is over — and it's Varys' turn next.

Knowing that he's destined to die can potentially help us see the breadcrumbs that are being laid to lead him to that fatal moment; and it certainly seems like it's going to involve Daenerys in some fashion. The seeds for this turn of events were planted in Season 7 when the dragon queen confronted the spider about his notoriously fickle allegiances. First he worked for her father, the Mad King, then he served the usurper Robert Baratheon; when he grew tired of Robert, Varys sought to replace him with Viserys, the last (male) Targaryen; only when Viserys died did his support shift to his sister, Daenerys.

Varys claims to serve the "realm" — aka the smallfolk of Westeros, who continually find themselves crushed beneath the wheel of the great houses' struggle for power. When he believes that a ruler is no longer ruling in the interest of the people, he'll abandon them and seek to supplant them with someone more worthy. Shortly after arriving in Westeros, Dany made Varys swear that, if he ever became displeased with her decisions, that Varys would confront her to her face rather than working against her behind her back. "I swear this," she warned. "If you ever betray me, I'll burn you alive."

True to his word, Varys directly confronted Daenerys when he recently developed doubts about her decisions. He pleaded with her not to burn King's Landing and all its innocent inhabitants, and she reluctantly agreed. But that didn't stop Varys from wondering if Jon Snow wouldn't make a better (read: more pliable) ruler, especially after Tyrion told him the truth of Jon's heritage.

After Missandei's execution, Daenerys seems poised to ignore her counselors' advice and "burn them all" in retaliation. If she does, and proceeds to slaughter the people of King's Landing, Varys will undoubtedly betray her in an instant, pressing Jon's stronger claim to the throne in hopes that Aegon Targaryen will be a better ruler than his aunt the "Mad Queen." And if Dany finds out about this betrayal, she will undoubtedly stay true to her word… and burn Varys alive.

Varys has been a powerful player in the game of thrones for eight seasons now — but as things approach the endgame, the Spider just might run out of clever moves. It would be fitting if his scheming is what leads directly to his own downfall, turning his greatest strength into his fatal flaw.