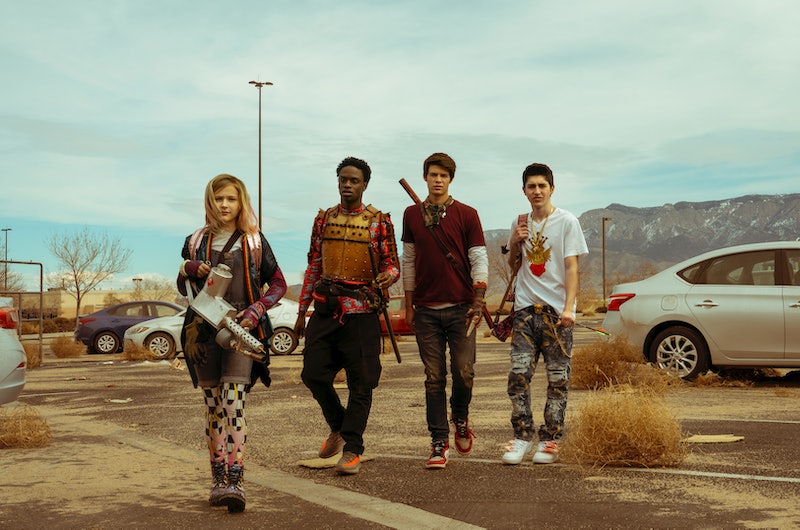 Netflix's new action comedy, Daybreak, follows a Glendale, California, native named Josh Wheeler (Colin Ford) both before and after the apocalypse. It's too soon to tell whether Daybreak will return for Season 2, but the premise is intriguing and promising. The show depicts the aftermath of a nuclear meltdown, which only affected people over 18 years old. All of the adults have either died or turned into zombies, which they call ghoulies in this comic universe. Consequently, the kids are left to run things, in a premise that's half Mad Max, half Lord of the Flies, and all chaotic fun.

Update: On Dec. 17, 2019 Netflix announced that it was canceling Daybreak after one season, according to Collider.

In addition to Josh, Daybreak features characters like his missing girlfriend, Sam Dean (Sophie Simnett). As a result, the snarky protagonist teams up with Wesley Fists (Austin Crute), who wields a katana and can pull off drop crotch pants, and the 10-year-old Angelica (Alyvia Alyn Lind). Former teen movie fixture Matthew Broderick also appears in Daybreak as a high school principal named Burr.

"We thought it felt right to show that Ferris Bueller has grown up and become Ed Rooney," showrunner Aron Eli Coleite told Entertainment Weekly, referring to the strict dean of students from Ferris Bueller's Day Off.

But while things have both literally and figuratively turned to dust, Josh is having the time of his life. Not only are there are no adults to tell him what to do, but his reputation as a loner has been rectified in this post-apocalyptic landscape. Much like Netflix's hit teen drama The Society the teenagers begin organizing themselves into factions. The cheerleaders are still a clique, it's just that now, they wield spears. The Hollywood sign now reads "LOL WOOD," and Josh marvels at all the free stuff he can loot without consequence.

With such a rich narrative, it may come as no surprise that Daybreak was adapted from a graphic novel of the same name, per Variety. The Netflix series was first greenlit in July 2018 and boasts Aron Eli Coleite and Brad Peyton as co-creators. As for its source material, the book's publisher, Drawn & Quarterly, described it as being "seen through the eyes of a silent observer as he follows his protector and runs from the shadows of the imminent zombie threat."

The novel was originally released in three installments before being compiled in a 2011 graphic novel. Daybreak was critically acclaimed, with Entertainment Weekly calling it "one of the best books of the year."

However, the Netflix show features some significant departures from its source material. While the novel featured an anonymous protagonist, the Netflix Daybreak has its subject, Josh, as a personality filled loner, who provides plenty of fourth-wall breaking narration. "Brad Payton (the director) thought it would be a good idea for the main character, Josh, to break fourth wall and that's where the Ferris Bueller nod comes in," Ralph told Den of Geek. "It's a throwback to an '80s classic and Matthew Broderick as one of the stars just makes it that much better."

That the show's subjects are teenagers is also treading new territory. "In terms of the high school aspect, it seemed fitting!" Ralph continued in the same interview. "I think it was Brad that made the comment, but everyone can relate to the feeling of being in high school, the feeling of being 'so over' this world and wishing you lived in another one. The apocalypse is that 'other world' and really allows for the playing field to be leveled so to speak, and for everyone to reinvent themselves."

In the same way, Daybreak has reinvented itself for a TV audience. However, fans will have to wait and see if that reinvention is enough to garner the Netflix series a Season 2.

More like this
Netflix Shut Down 'Bridgerton' S3 Rumours About A “Very Dark” Storyline
By Bustle
'Wednesday' Star Emma Myers Thinks A Wenclair Storyline Is “Possible” In Season 2
By Alyssa Lapid
The 'Freeridge' Cast Shared Their Hopes For A Potential Season 2
By Grace Wehniainen
Everything To Know About A Potential 'Lockwood & Co.' Season 2
By Gretchen Smail
Get Even More From Bustle — Sign Up For The Newsletter
From hair trends to relationship advice, our daily newsletter has everything you need to sound like a person who’s on TikTok, even if you aren’t.