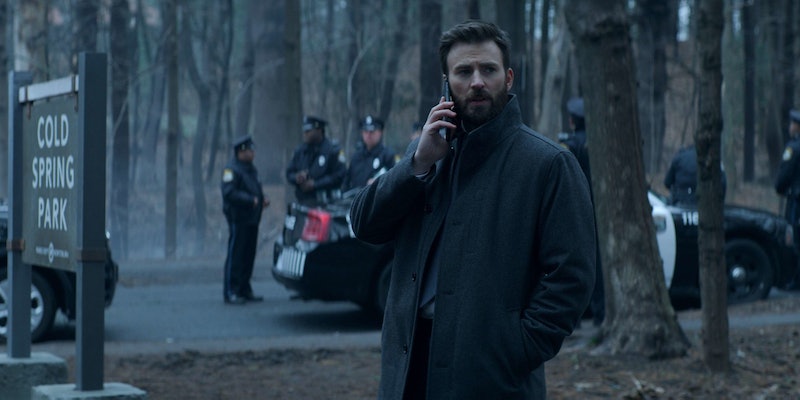 Legal drama Defending Jacob is nearing the end of its eight episode run. The series — which follows a family who wonders whether their 14 year-old son is actually a murderer — is gearing up for the series' big court case in its final episodes. And fanswho are engrossed in the show are already wondering, will Defending Jacob return for Season 2?

Unfortunately, there's been no AppleTV+ renewal plans revealed as to whether Defending Jacob will be picked up for another season. However, according to Deadline, Defending Jacob is in Apple TV+'s top three shows for audience growth among original programming, and holds the highest viewer engagement (that is, people tuning in for one episode watched the others available to stream). Which will likely make the streaming service interested in developing another season.

The show stars Chris Evans as Andy Barber, a Massachusetts ADA investigating the murder of his son's classmate. When evidence points to Andy's own son Jacob (Jaden Martell) as the main suspect, Andy's entire family spirals into doubt and uncertainty, and Andy is forced to face the traumas of his own past.

Whether or not fans will see a Season 2, they should be happy they had eight episodes to begin with. Because initially, the series was meant to be a one-off movie. "It was sent to me by [production company] Anonymous Content with the idea it would be a film," show creator and writer Mark Bomback told Deadline. "I was thinking this was going to be an uphill battle making this a film... so I called them back and said I'm not interested in doing a film...but I would love to try and do a limited series version of it."

Like many other recent popular limited series (Sharp Objects, Big Little Lies, Little Fires Everywhere), Defending Jacob is based on a novel. The source material, written by William Landay, comes to a firm conclusion that cuts off possibilities of extending the story beyond a first season. But as we've seen with other series', there's no telling how closely the show will hew to its source material. Plus, Defending Jacob's producers have come right out and said audiences can read the original book without spoiling the miniseries. According to Bomback, "[A book summary] would not tell you the ultimate plot of the series," he shared with Deadline. "You’d get sort of a version of events that would skew somewhat differently by the time you were done." So where it ends — and how it ends — is yet to be revealed.