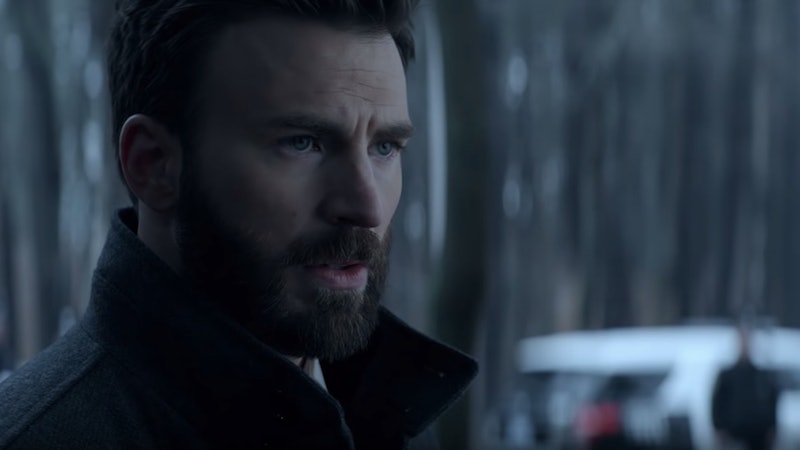 Saying our culture is obsessed with true crime would be an understatement. So lucky for us, a new Apple TV+ miniseries called Defending Jacob could be the latest entry in the genre, with Chris Evans playing a father whose 14-year-old son is accused of murder. The series certainly hits all the hallmarks of a true crime drama series, but is Defending Jacob based on a true story?

The series definitely feels like it's a dramatization of an actual true crime story. It's Jaeden Martell portrays Jacob, the teen at the center of the story, while Evans and Michelle Dockery play his parents. Jacob is accused of murdering his classmate, and when the evidence begins to pile up that points to his possible guilt, his parents increasingly struggle with the idea that their son may be a murderer, while also trying to defend him from the accusations. It's full of twists and turns like any true crime story worth its salt, and also includes some healthy doses of family drama and shady law practices — other hallmarks of the genre. But despite these similarities to true crime dramatizations, Defending Jacob is a work of pure fiction.

The miniseries is based on the novel of the same name by author William Landay, which was first published in 2012. The book has been praised for its extremely realistic courtroom scenes, which add to the true crime feel, and that's no accident. Before becoming a successful author, Landay worked as an Assistant District Attorney, and he used that experience when writing Defending Jacob. "I was an Assistant DA for several years in the 1990s, and many of the details in the book grew directly out of that experience," Landay told publisher Random House in the book's press kit. "The prosecutor’s office portrayed in Defending Jacob, the Middlesex County (Massachusetts) DA’s Office, is the same one where I worked — though the characters themselves are entirely fictional. (Yes, really.) And Jacob’s murder trial, which is the main set piece of the book, is described in as much authentic detail as good storytelling allows."

As for what inspirations Landay drew from when writing the novel, the author stated that he had several in an interview with the Seattle Post-Intelligencer, while citing two. He read a story about a detective's whose father was a convicted murderer, and whose son was later accused of murder — a plot point that is echoed in Defending Jacob. Landay also noted his altered personal life since becoming a father, and his desire to write about family dynamics. "When I began Defending Jacob, I had left the DA's office and my life had become more about kids and family, less about crime," Landay said. "I wanted to combine these two strands in my life, the criminal justice system and the quieter life of raising kids in the suburbs. The result was Defending Jacob, a novel about a prosecutor and suburban Everydad whose son is accused of a murder."

Defending Jacob may not be a true story, but it certainly feels real thanks to doses of professional and personal reality that were injected into the story by its author.