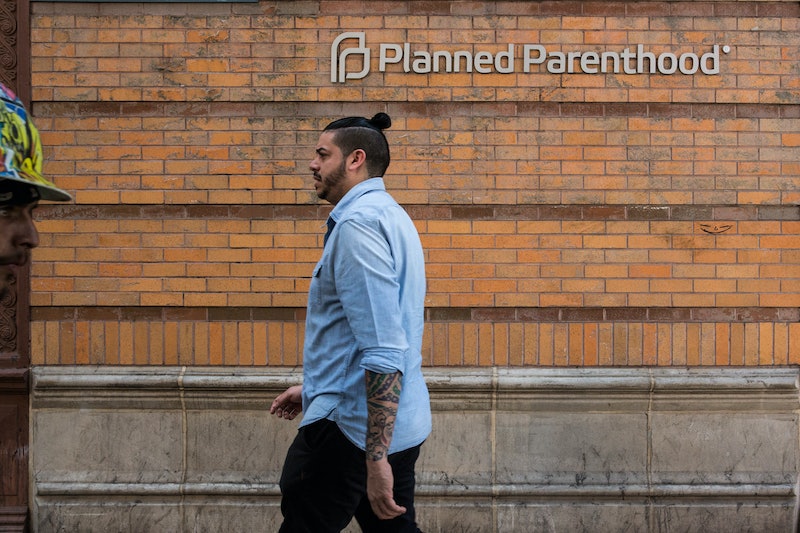 In the midst of the many debates overs the merits and flaws of the American Health Care Act, the Republican attempt to repeal and replace Obamacare, one issue has stood out as especially controversial: a provision in the bill that would defund Planned Parenthood and similar health providers. For over 40 years, the government has already prohibited federal funds from paying for abortions, but Planned Parenthood received support for its litany of health care services. In the GOP's long battle against Planned Parenthood, this seems like it could be the most powerful shot.

But if you look at all that Planned Parenthood does, its actions go beyond just women. According to the organization, over 250,000 men get medical services from the organization in 2014, more than double the number of a year before.

"We open our doors to everyone," Philip Clapham, a spokesman for Planned Parenthood, tells Bustle. "Regardless of who you are and where you live. And that includes men."

We're a safe space for LGBTQ folks, many of whom are gay, bi, or transgender men, who have very specific barriers to health care and also needs as well.

The most common Planned Parenthood services used by men are sexually transmitted disease and infection care, including tests for HIV, gonorrhea, and chlamydia. But the organization also provides more involved services, such as vasectomies and premature ejaculation treatment.

One major focus of the organization is LGBTQ men, who can have trouble getting adequate care in other ways. "We're a safe space for LGBTQ folks, many of whom are gay, bi, or transgender men, who have very specific barriers to health care and also needs as well," says Clapham. "They always see us as a safe space to come to, where they can get that care without judgment."

Pedro Elias, the Director of Public Affairs for Planned Parenthood Mar Monte (an affiliate that runs 34 clinics in California and Nevada), ran a Male Involvement Program (MIP) from 1998 to 2013 that educated at-risk men on reproductive health, as well as on how to take responsibility as a member of their gender.

If we educate men, it encourages their partners.

"We have a conversation with young men so that they understand that there's an opportunity for them to control their bodies," Elias tells Bustle.

He himself first got involved with Planned Parenthood when he got treatment for an STI at age 20. "It was a great experience for me," he says. "They ensured I had all the information possible before I walked out of the health center."

The MIP was focused not only on teaching men about their own bodies, but on teaching them how to be better men. It included education on how birth control affects women, allowing men to be better partners. "If we educate men, it encourages their partners," says Elias.

"They provided a really safe structure and educational program to help us learn how to be better people because we don't have guidance as it is," Michael Luna, one of the more than 15,000 men who were helped by the MIP, tells Bustle. In the program, Luna says he learned "how to comport myself, how to be a man, how to think right, how to respect women, how to have the most positive outlook, whether it be a bad or good situation, and how to approach it and maintain the best situation."

Before finding Planned Parenthood, Luna had been gangbanging on the streets and selling drugs. He tells Bustle that he ignored group homes, feeling like he didn't have to respond to their authority. "They weren't my parents, so why listen?" But Planned Parenthood felt different, he says. "They were a very friendly, positive group of people that made me want to cooperate, made me want work with them. They look at you directly in the eye and they speak to you and give you the best information possible."

Carlos Jimenez was twelve when he first started participating in the MIP. "I got hooked," he tells Bustle. He says he spent enough time at Planned Parenthood that his friends started relying on him to get them condoms. "The condoms were free. You go to a CVS pharmacy you'd pay for them. My friends would tell me to get them condoms."

But more than that, what Planned Parenthood offered Jimenez was a clinic that could provide help confidentially, without any stigma or judgment. "It's a safe place, and it's confidential. They keep all your information to themselves."

For those who found help there, the prospect of Congress defunding the organization is worrying.

"It would be a bad idea, especially for those who are low income, or in the poverty line," says Jimenez. "It just doesn't seem fair."

More like this
'The Capture' Is Finally Back – & S2 Looks Tense AF
By Sophie McEvoy and El Hunt
The Lionesses Are Calling For Equal Access To Football In Schools
By Sophie McEvoy
The 5 Best Anti-Chafing Sticks
By Lauren Moison
Which Cast Member of 'Westworld' Season 4 Has the Highest Net Worth?
By Meg Walters
Get Even More From Bustle — Sign Up For The Newsletter