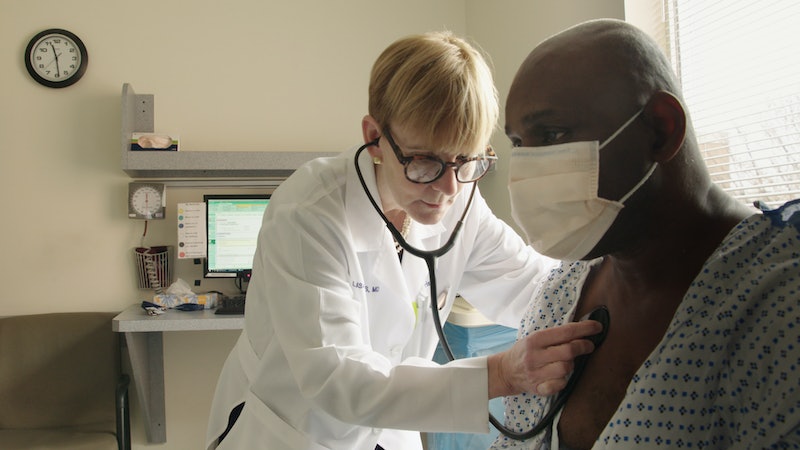 The New York Times Magazine columnist Dr. Lisa Sanders is bringing her medical expertise to Netflix with Diagnosis. The seven episode docuseries, which debuts on Aug 16, will follow several patients with mysterious illnesses who enlist Dr. Sanders (and social media) for help. There’s no indication that this is a simply a miniseries, so Netflix may decide to green light Diagnosis Season 2 based on viewers' responses. And, with the strides that still need to be made in modern medicine, there’s undoubtedly plenty of people with complicated symptoms and no clear diagnosis who could use this type of series to inspire them to find answers.

Dr. Sanders’ journey towards helping people on TV has been in the works for many years. Per YaleNews, Dr. Sanders was a technical advisor behind the TV series House M.D. and currently works for Yale Medical School. In 2009, she wrote Every Patient Tells A Story about how patient interviews contribute to diagnosis. Her New York Times Magazine column, also titled Diagnosis, has been running since 2002 and now the series is giving her a chance to take additional action in people’s lives.

The Diagnosis trailer reveals several of this season’s patients, including a 6-year-old girl who is inexplicably paralyzed for several seconds hundreds of times throughout the day, a Gulf War veteran with memory loss, a young woman who can't hold food or water down, and a man who flatlines when experiencing déjà vu, among other patients. Their ages and issues are wide ranging, but all of them have one thing in common — they want to have an official diagnosis.

Dr. Sanders then introduces herself and explains how she uses the Internet to gather intelligence from across the globe to find others who are experiencing the same rare symptoms as well as experts who may have some answers. The clip is short, but it’s packed full of hopefulness and feels, so viewers may want to have a big box of tissues nearby.

Dr. Sanders joined one child patient's mother on the TODAY show to talk about the novelty and impact of using crowdsourcing to solve difficult cases. "This is new, it's all new," says Dr. Sanders. "We're just starting to figure out how to reach out. It's not just doctors who have this special information. Doctors learn because they have seen it before...we have the greatest chance of having seen unusual things but we're not the only ones. Mothers, fathers, friends, families, acquaintances, and teachers all see these usual patients and may know something."

The doctor said she initially introduced this case on her column and the response from readers was overwhelming, which eventually led to the Netflix series. There may not be any word on Diagnosis Season 2, but for now viewers can tune in to see how social media, crowdsourcing, and the power of staying connected to others across the globe can change not only the lives of these people, but the way that medial research is approached in the future.