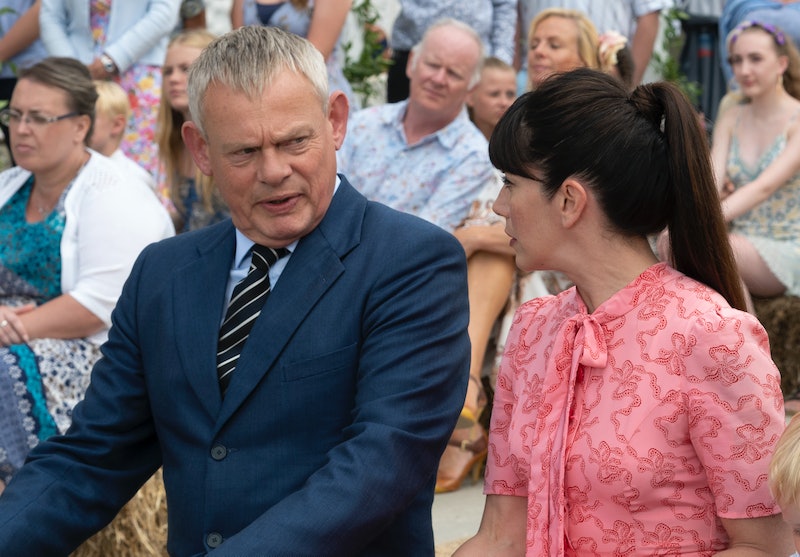 Doc Martin has become an ITV staple over the past 15 years. Its ninth series came to a close on Wednesday night (Nov. 14), which saw a lot of major life moments happen to Martin Ellingham (played by Martin Clunes), including the future of his job as Portwenn's resident GP. But after last night's cliffhanger, many viewers were left wondering will Doc Martin return for series 10?

It's not looking great, especially since ITV tweeted what seemed to be a goodbye to the character last night. This could be read as a farewell to the show as a whole, or it could be referencing the events of the episode. As Digital Spy reports, ITV hasn't commissioned the show further than a ninth series, and a rep for ITV tells Bustle "[t]here's no decision on a new series of Doc Martin as yet," and that its future will be discussed over "the next couple of weeks."

Still, Clunes told the entertainment site that this doesn't necessarily mean the end. "That was the last one [series 9] we had commissioned," the actor said in 2017. "We don't just decide to make it on our own, ITV have to commission it." He continued:

"And ITV has commissioned the ninth. We don't have a commission beyond that. Ask me again in two years." Well, his two years are up. You better start talking, Clunes. Especially for the fans, because if Twitter is anything to go by, they believe it's all over.

What's even more confusing is that when the seventh series ended, the cast seemed to believe that was the end of the show as well. "At the end of the series wrap party with the best drinks and food ever we were thinking this is looking pretty — is this a goodbye?" actor Ian McNeice told Metro. "We were getting a little nervous. Then we had a cast and crew photograph and we had never done that before, and it was slightly unnerving that the end of this series we wrap things up nicely. But it is not [over] and we are thrilled."

Clunes had also said that the eighth series would be the end, but obviously, that didn't end up being the case. "I'm un-ending it," he told Radio Times earlier this year. "We probably plan to do one every other year now..." But then again, he also told Metro that series eight "is the second to last". Yeah, I don't know what to believe anymore either.

You can stream Doc Martin series nine on the ITV Hub.