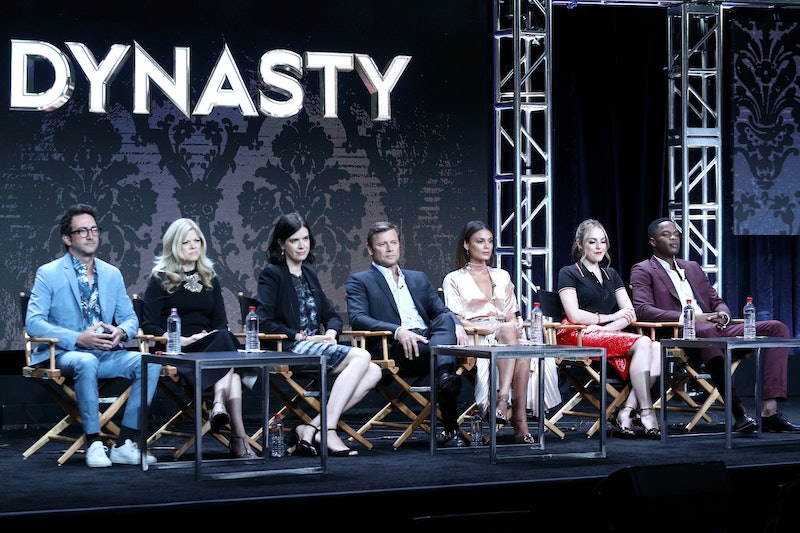 With its shoulder pads, big hair, and bigger drama, the original Dynasty brought a new level of glam to primetime television. And when The CW rebooted the show in 2017, they brought the show's glitz along with it. Now, three years into the modern retelling of the melodramatic classic, Dynasty has already been renewed for season 4.

At the very start of January 2020, The CW made the unusual move of announcing all current shows were renewed through 2020/2021, save for those set to end completely that year. Dynasty, midway through season 3 at the time, was one of thirteen shows that got the early go ahead for another season.

Season 3 was originally intended to have 22 episodes, but due to the effects of the novel coronavirus, the show stopped filming new episodes in March 2020. Actress Liz Gillies, who plays Fallon Carrington, confirmed filming was interrupted in the middle of the last day of shooting episode 20. "There is no finale at this juncture, and there is no episode before the finale,” Gillies told JustJaredJr. “It ends in a very weird place. I don’t know what that means for Netflix or for anything, but I know we’re not the only show experiencing this.”

“I don’t know if we’ll pick up the finale later, I’m not sure what the plan is. It certainly shouldn’t end on the episode we finished, because it’s just really random and nothing’s resolved. I apologize if it does,” she continued.

When asked if the show might try finishing up the season with an at-home approach, Gilles responded by saying, "[That] sounds horrible. You think all of our houses look like the Dynasty set? They don’t. I’m wearing matching sweatpants right now.”

Whether or not the coronavirus will delay the filming of season 4 remains to be seen. But in the meantime, the third season will be available to stream on Netflix on May 23 — and it has more than enough drama and intrigue to tide you over until The CW gets things up and running again.