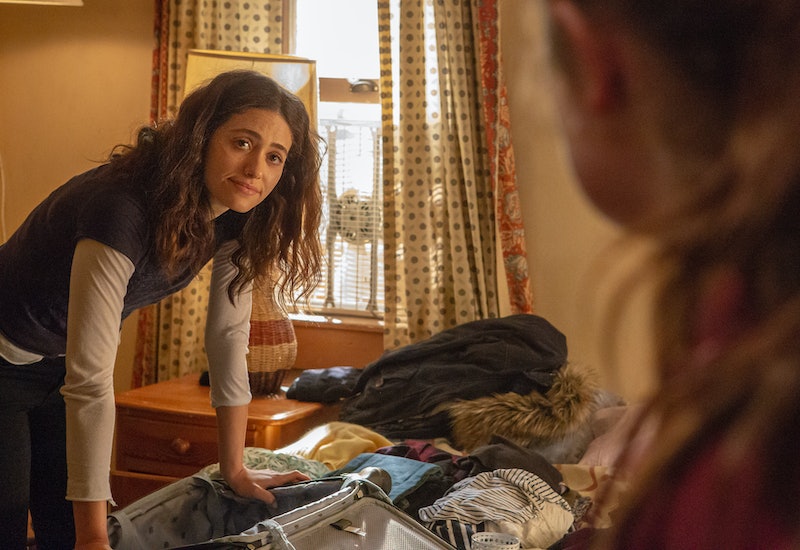 The Shameless Season 9 finale airs on Sunday, March 10, and a lot has happened since the season premiere. At the surprise of some, the show was renewed for another season, and two stars — Cameron Monaghan, who plays Ian Gallagher, and Emmy Rossum, who plays Fiona — announced their departures from the show. Some reports say Monaghan will return in at least a few episodes, per Entertainment Weekly, but will Emmy Rossum be in Shameless Season 10? Unfortunately, there are no signs of a Fiona comeback just yet.

Rossum announced her departure in an open letter to fans on Facebook in late August. "The opportunity to play Fiona has been a gift," she wrote. "There are few characters — female or otherwise — as layered and dynamic ... I knew it the second I read the pilot script, this was different, this was special." She went on to say that "there is much more Gallagher story to be told" and encouraged fans not to think of her as gone, but as "moving down the block."

Still, that doesn't mean Fiona will reappear anytime soon. In an interview with Entertainment Weekly, Rossum reflected on her role and discussed her goals for the future. “I was 23 when the show started and it’s been pretty remarkable the confidence that it’s given me,” she said. According to the interview, Rossum is now 32. “It’s been a long, wonderful journey and I’m so close to my Gallagher family that to walk away is quite bittersweet, but it did feel like it was time for the character to spread her wings and that there was less need for her."

Season 9 has seen Fiona sink to a new low after triumphing some serious Gallagher-sized hurdles in attempt to find herself as an individual. She was on the upswing with a place of her own and some property investments, and when those fell through, so did her will to succeed. She quickly found herself where many Gallaghers have — drinking away her woes from a front yard lawn chair. That got her into even more trouble, and thankfully, the second to last episode of the season revealed how she might get out. Max, the scumbag who everyone thought was out to steal her money, and well, sleep with her, pulled through. He bought out her investment (that didn't fall through after all) and cut her a check for $100,000. Queue Fiona's happy ending.

Most fans would probably agree in delight for Fiona's success — she has earned it, that's for sure. But her struggle was integral to the show's sweetness. And possibly most strikingly, it stooped her to a level that she's always despised: her father's. In a later Season 9 episode, Fiona woke up next to Frank as hungover as he has been for the last 10 years, and wondered if she was an alcoholic. That parallel took her all the way to the show's pilot and back — a true full circle moment, which Rossum said she really loved.

In the same EW interview, she stressed that she could never fully close her door to the Gallagher household. "I’m just in New York," she said. "It’s not like I’ll never be in L.A. or Chicago ever again, so I’m not that far away. But for me, quite honestly, I’m not sure what more story can be told for her. I really liked the way we ended it. But never say never; I really love all the people I work with. There’s so many other things that I want to do but I love my family."

With such an iconic stretch of character under her belt on top of Rossum's pure, undeniable talent, a new, equally intriguing gig (or gigs) is more than likely to scoop her up sometime soon. But there will always be a room (or at least a couch) for her on the South Side.