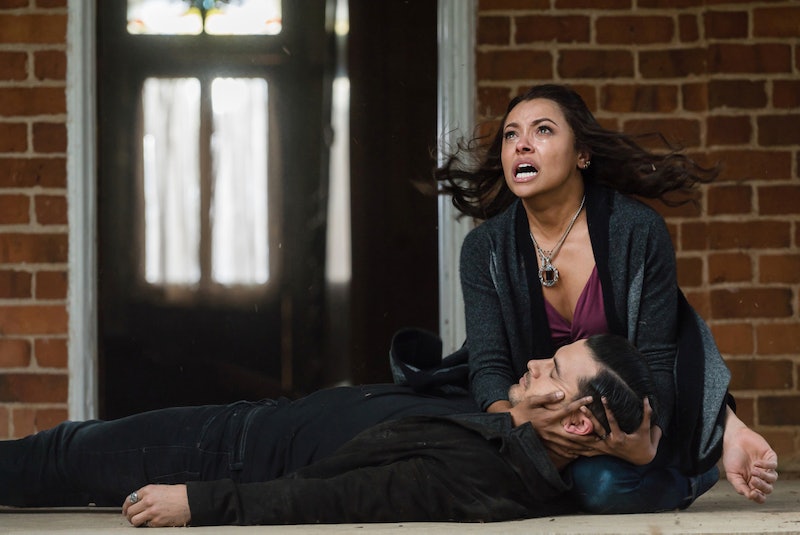 Just when you thought Bonnie Bennett couldn’t go through any more heartache on The Vampire Diaries, the show throws in a curveball and kills the love of her life. A few episodes back, Stefan killed Enzo on The Vampire Diaries, but because Bonnie has some weird powers, her grief caused a ripple effect that created a new world in which Enzo is now hiding from Cade. And although Bonnie lost her witchy abilities ages ago, the fact that she had the power to create a new “other side” suggests that she might have her magic again and possibly be able to bring Enzo back from the dead in The Vampire Diaries series finale.

Fans know that when someone dies on The Vampire Diaries, it doesn’t necessarily mean that they’re really dead. Over the past eight seasons, we’ve seen Alaric, Jeremy, Lexi, Grams, Vicki, Stefan, Damon, Matt, and pretty much all the Mikaelsons die, and one way or another find their way back on the show. Alaric and Jeremy were even brought back to the land of the living for good, thanks to Bonnie Bennett. If we’ve learned anything over the course of the show, it’s that Bon Bon will do anything to keep the people she loves alive and I think I have a pretty solid theory about how it’s all going to go down. So, Enzo fans can relax, as it seems to me, at least, like he’s going to be back.

Bonnie has her powers back and she just doesn't realize yet to what extent. She’s able to close her mind to Cade and keep Enzo safe in the world she created, yet she’s able to go into that world to see him, spend time with him, and even make out with him. It makes no sense that she wouldn't have her magic at this point. She will probably realize it in this upcoming episode. When she does discover she has magic, she is going to find the spell that brings Enzo back from the dead.

I know, she’s done this before with Jeremy Gilbert and it was so strong that it killed her. So won’t that happen again? Well, I think she’s going to do it again and we’re going to think she’s dead, but she actually drank Enzo’s blood that he gave her before she brings him back. She will die, he will come back, and she will wake up as a vampire. Not only will Bonnie be reunited with Enzo, but because she died, it technically means Elena will be able to wake up, creating a loophole in Kai’s spell.

I know that the creators of the show prefer more death instead of the simple theory I have, but it seems too obvious if Bonnie is the one who dies at the end. There has to be some kind of twist when it comes to that major death they’ve been teasing. Plus, Bon Bon has lived through death, being the portal to the other side, and seeing the inside of a hell world alone. I think she can manage to stay alive a bit longer.

If she does die, it will be by her own hand and specifically so she can be dead and reunited with Enzo forever. In this case, Elena would obviously wake up and be with Damon, supposing he doesn't die.

Bonnie Bennett is the one person who deserves a true happy ending on this show, and I will riot if the series ends with her and Enzo apart.