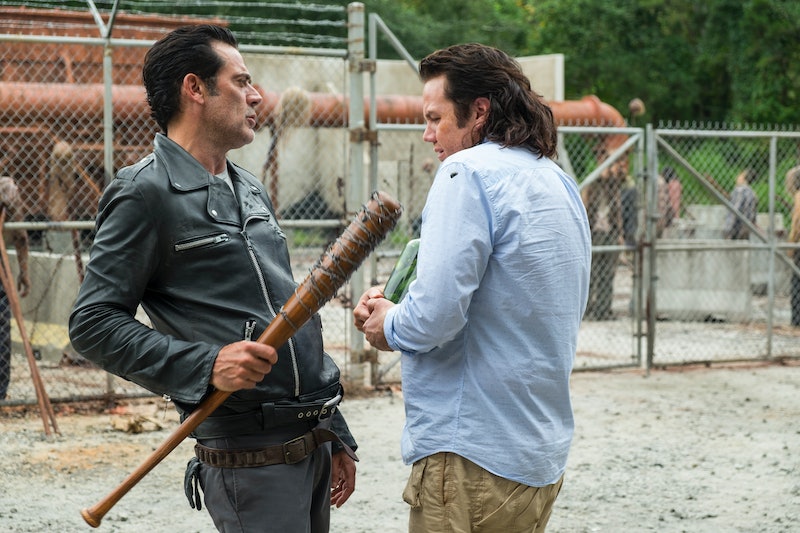 Sometimes it’s hard to keep up with all of plotlines simultaneously happening on The Walking Dead Season 7. I’d almost forgotten that way back in the Dec. 11 midseason finale, Negan captured Eugene and brought him back to the Saviors' main base, the Sanctuary. So it’s only natural at this point to wonder, will Negan kill Eugene? Negan loves to toss Lucille around and dole out punishments without thinking, but Eugene actually proved himself to be extremely useful and valuable in the midseason finale, and that just may save his life.

Since it’s been a while, let me quickly remind you that Rosita pulled out her gun and tried to kill Negan. She missed, hitting Lucille instead, and when Negan looked at the bullet, he realized that someone at Alexandria was making these bullets. He demanded that the person step forward and finally, Eugene owned up to it. Negan then took him prisoner and that was the last time we saw him — or even heard about him. Though the group immediately went searching for Gabriel after he went missing, Eugene is the person they should really be worried about. Because you know who the most valuable person in a war is? The only one who knows how to make bullets.

Thanks to that skill, I have a hard time believing that Eugene will die anytime soon. He has leverage and if he plays it right, he will be able to stay alive for a long time. He hasn’t been the smartest person in the past, so this is his time to shine. Otherwise, I’m sure Negan will find other ways to produce bullets and Lucille will have a new victim.

It's worth noting that in the Walking Dead comics, Eugene is still alive and actually pretty useful to Alexandria after the war against the Saviors. Not to mention, he even has a love interest, but I won’t spoil who it is because viewers already know her. But if the TV version of Eugene wants to survive this hostage situation, he needs to follow his comic book counterpart. Spoilers for The Walking Dead comics ahead.

In the comics, Negan tells Eugene that he can either make ammunition for the Saviors, or he will iron Eugene's face, castrate him, and kill other Alexandria civilians. Eugene still refuses and tells Negan that he would never betray Rick. Then, he has a surprise visitor. Dwight comes to Eugene and tells him he wants to rescue him and escape the Sanctuary. Eugene refuses to believe him at first, but eventually, more Saviors join in the escape, including characters Carson, Mark, and Amber. The group manages to steal a van, escape, and, after a run-in with some walkers, make it safely back to Alexandria.

So if The Walking Dead follows the comics, Eugene will get a happy ending. Unfortunately, the AMC series likes to switch things up on fans, so his on-screen fate could be very, very different. Godspeed, Eugene.