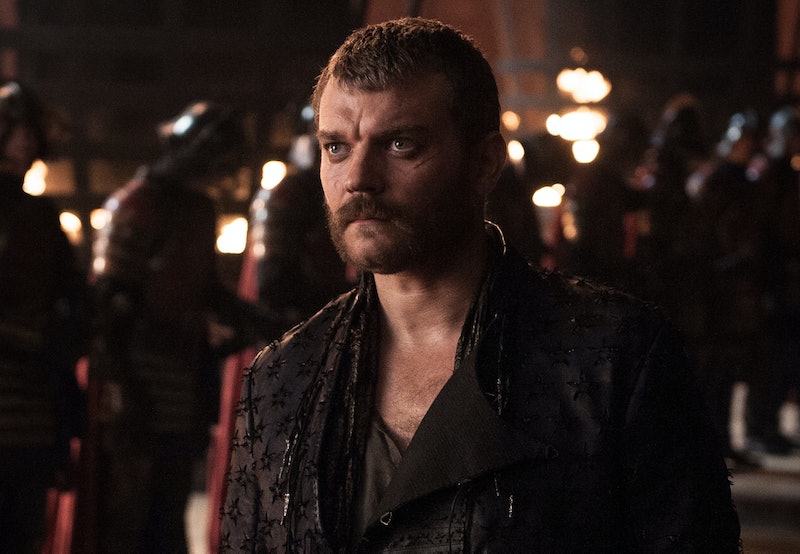 When Euron Greyjoy met with Cersei Lannister in the season premiere of Game Of Thrones, he said he would return to the queen with a gift for her. Now, that gift is revealed — "Stormborn," the second episode of the series, ended with the Greyjoy fleet taking over the ships Yara Greyjoy promised to Daenerys Targaryen and killed Sand Snakes so that he can bring their bodies (and Ellaria Sand, who killed Cersei's daughter Myrcella) back to King's Landing. But will Euron Greyjoy kill Yara?

It's no secret that Euron ultimately wants to be rid of his niece; he told Cersei and Jaime as much when he offered to ally with the Lannisters. After all, she challenged his right to rule the Iron Islands at the Kingsmoot last season when she put forth her own claim to the throne, and she and Theon made away with some of the best ships in the Iron fleet to bring Daenerys across the Narrow Sea. Plus, Euron is kind of a misogynistic creep with a penchant for killing family members, so it stands to reason that he and Yara aren't exactly meant to get along.

So when Euron descended on Yara's ships and held a knife up to her throat at the end of the episode, it seemed like he was about to achieve his goal and put an end to her. Theon Greyjoy must have thought so, too, because when Euron egged him on to try to rescue his sister, he noped the heck out of there and jumped off the side of the boat. Really, Theon? I know Ramsay Bolton basically broke you (and you weren't all that great to begin with), but again? Wasn't watching Sansa get abused over and over again by Ramsay two seasons ago supposed to snap you out of this?

At least there's small comfort in knowing that as of the end of the episode, Yara doesn't appear to be dead yet — because the episode dipped into Theon's point of view and he fled the premises, the camera never actually showed her getting her throat cut. That means it's very likely she's still alive, which makes sense; Euron would certainly want to torture her for a little bit first, because he seems like that kind of dude.

It's also possible that he might try to package Yara in as part of his gift to Cersei. Even though he's the one who wants her dead, allowing his new queen to choose the method of Yara's execution might be a way to prove to her how serious he is about being at her side. It's like allowing your date to pick what you're both going to have for dinner; you have to trust the other person and care about their opinion. And, in Euron's case, you also have to be a bloodthirsty miscreant who likes watching other people suffer. How romantic, am I right?

Either way, I hope this means that there's opportunity for Yara to escape and take down as many of Euron's followers — maybe even Euron himself — before she finally meets her Drowned God. I understand that no one is safe on Game Of Thrones, but I sure could do without yet another instance of a murderous psychopath terrorizing a prominent female character. After all, wasn't there enough of that when Ramsay Bolton was still alive and kicking?

More like this
'GoT' Star Emilia Clarke Says She "Just Can't" Watch 'House Of The Dragon'
By Brad Witter
'The Last Of Us' Has Officially Been Renewed For Season 2
By Darshita Goyal
'The Last Of Us' Star Bella Ramsey Almost Didn’t Take The Role Of Ellie
By Grace Wehniainen
Turns Out George Clooney Is A Huge Fan Of This Classic British Game Show
By El Hunt
Get Even More From Bustle — Sign Up For The Newsletter
From hair trends to relationship advice, our daily newsletter has everything you need to sound like a person who’s on TikTok, even if you aren’t.