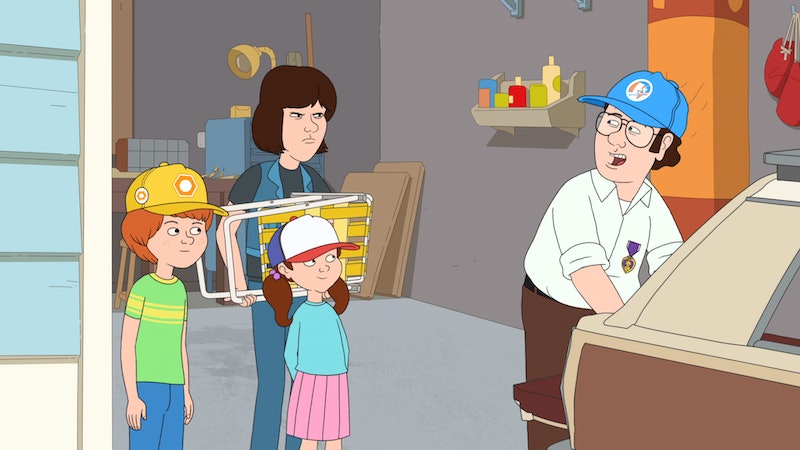 When Netflix's F Is For Family comes back Nov. 30, the Murphy family will once again be cursing their way across screens. The new season marks a welcome, albeit brief, return to the '70s, which should make for a fun — and very speedy — watch. That means it won't be long before fans start getting curious if F Is For Family will return for Season 4, and if so, when to expect new episodes.

So far, there's hasn't been an announcement regarding the future of F Is For Family, but Netflix has been generally supportive of its animated properties in the past, which suggests that a fourth season will happen if creator and star Bill Burr is interested in continuing the show. Netflix's flagship animated series, BoJack Horseman, has gone on for five season and was recently renewed for a sixth, and the service has already renewed fantasy animated series Disenchantment, promising 10 new episodes per year through the year 2021.

While BoJack has critical acclaim fueling its renewals and Disenchantment has animation superstar Matt Groening attached to it, F Is For Family has its own secret weapon up its sleeve with Burr. The comedian has amassed over a million twitter followers through both his stand-up and long-running Monday Morning Podcast, which has been released weekly since 2007. With so many people pumping his voice into their ears on a weekly basis, Burr has a connection to a large fanbase that could supplement his show's viewership enough to secure a fourth season of F Is For Family.

The crass comedy, which premiered in 2015, is loosely inspired by Burr's own childhood, fictionalizing raw, unfiltered stories from his youth. "In the first half of my career, when I was a younger comic, I told family stories on stage and they got laughs. When I became the older comic and a new generation of kids grew up, as parenting styles changed, the laughs turned into groans. Actually, sympathetic noises," he told Animation World Network in 2017. "For those kids, today, for better or for worse, a lot of things are labeled, as far as, 'That's bullying, that's mental abuse, that's emotional abuse, physical abuse.' All that stuff. When I was growing up ... it was called life."

Burr went on to say that he hopes the show will push people "out of this PC mindset" and allow them to "just see [his stories] for the humor they have as well as the love underneath." That goal has been enough to secure three seasons of F Is For Family, so there's little reason to imagine it wouldn't get a fourth at this point.

However, if the series does get a fourth season, it may not arrive for quite some time. Since its premiere, F Is For Family has debuted a new season approximately every year and a half, which would put a Season 4 release date around May 2020. It's a long wait, but hopefully, Season 3 will be enough to keep fans satiated until then.