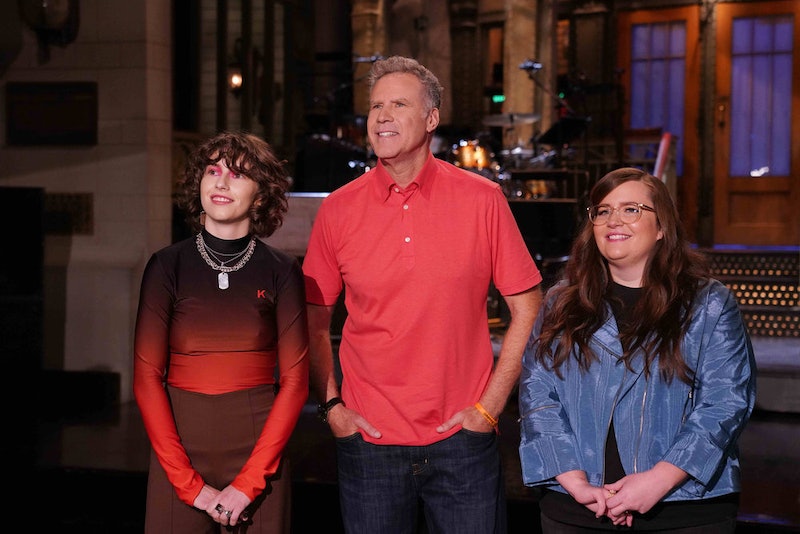 Will Ferrell, who was a cast member on Saturday Night Live for seven season seasons, returned to the show on Saturday, Nov. 23 to host for the fifth time. But while comedy fans may have been excited to see one of the biggest names in the show's history return to Studio 8H, he only had eyes for another star. During his SNL monologue, Ferrell got starstruck by Ryan Reynolds, ditching his planned jokes to blush and giggle over the Deadpool star's presence in the audience.

It was expected that plenty of big names would appear on Ferrell's episode, particularly considering that members of the Five-Timers Club have historically kicked things off with a star-studded monologue. But when the comedian spotted Reynolds in the audience, even he seemed stunned. "I can't believe you're here. Oh my god, Ryan Reynolds is here," a flustered Ferrell said, before stumbling over his lines.

Unfortunately, once Reynolds mentioned that his wife, Blake Lively, is also a fan of Ferrell (though, sadly, she was watching at home), the comedian was unable to get things back on track, instead singing some of "Everybody (Backstreet's Back)" and doing a Tracy Morgan impression. "Whenever I get nervous, I go into Tracy Morgan," Ferrell said. "In fact, I delivered my wedding vows in this voice. It was a big day." Reynolds wasn't a huge fan of the Anchorman star's impression, but he did get the seal of approval from Morgan himself ... as well as most of social media.

Later in the episode, Reynolds appeared on Weekend Update as "Guy Who Knows the Owner," the equally repugnant buddy of Alex Moffat's recurring "Guy Who Just Bought a Boat" character. Despite the fact that anchor Colin Jost didn't have Reynold's character on the list, he still managed to make a surprise appearance because, well, he "knew the owner."

As strange as it might seem for Reynolds to make a surprise appearance on Ferrell's episode of SNL, the pair actually have a professional connection. In September, The Hollywood Reporter announced that Ferrell and Reynolds are working on a musical reimagining of A Christmas Carol. Details about the project have so far been scarce, but the outlet stated that the film will be written and directed by Daddy's Home filmmakers Sean Anders and John Morris.

As for SNL, Reynolds was far from the only famous face to make a cameo on this week's episode. In addition to Morgan's monologue-centric warning that the "prophecy must be fulfilled," Maya Rudolph and Rachel Dratch reprised their roles as Sen. Kamala Harris and Sen. Amy Klobuchar, respectively, during a sketch about the recent Democratic debate. They were joined by Fred Armisen, who played former New York City mayor Michael Bloomberg — a character he often portrayed him during his time on SNL.

Ferrell may be one of the most famous and beloved comedians in Hollywood, but apparently even he isn't resistant to the charms of Ryan Reynolds.

More like this
Did *That* Character Really Die In The 'Stranger Things' Season 4 Finale?
By Grace Wehniainen
'Stranger Things' Fans Are Begging For Steve To Live For The Funniest Reasons
By Grace Wehniainen
Emilia Clarke Shares More Details About The New 'Game Of Thrones' Series
By Maxine Harrison
'Criminal Record' Is The 'Doctor Who' Reunion We’ve All Been Waiting For
By El Hunt
Get Even More From Bustle — Sign Up For The Newsletter